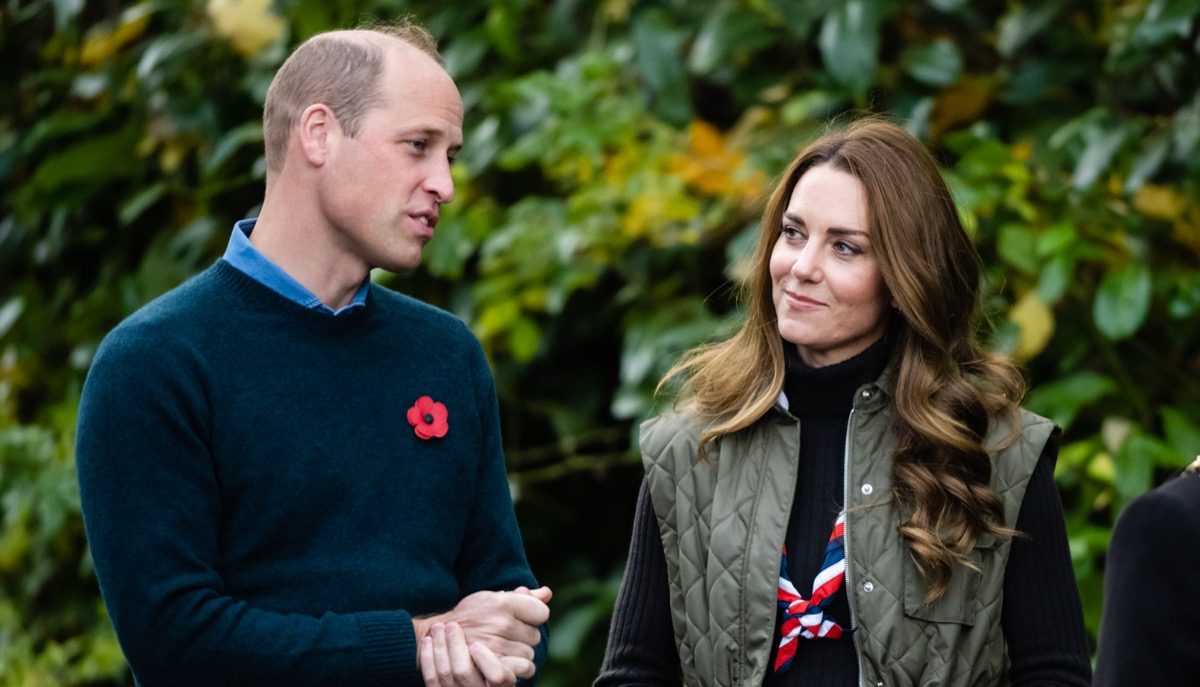 Anyone who had an all-consuming crush on a celebrity as a teen has likely daydreamed about what it would be like to meet and fall in love with that celebrity—and it’s okay to admit it! Plenty of us have memories of hanging a poster (or 20) on our bedroom walls, imagining the day we’d go to a concert and our favorite singer would pick us out of the crowd. Though that’s usually not how reality goes, for a very few lucky fans, that’s exactly how their love stories began. It may sound like a plot straight out of a movie (or a really juicy fan fiction), but it’s happened before. More than one teen idol has ended up married to a fan. Read on to hear about 15 such heartthrobs and how they met their future spouses.

READ THIS NEXT: 15 ’70s Teen Idols You Totally Forgot About.

Drummer Ringo Starr’s first wife, Maureen Cox, was a big fan of The Beatles. According to The Independent, she and Starr first met when the band was regularly playing at the Cavern Club in the early ’60s, though things got a bit hairy for her when fellow fans realized she was in a relationship with a band member. Starr and Cox married in 1965, after Cox turned 18, and had three children together. Their marriage fell apart after she had an affair with Starr’s fellow Beatle George Harrison, and they split in 1975.

Starr would go on to marry Barbara Bach, while Cox later married Isaac Tigrett. She died in 1994 at 47 years old after a battle with leukemia.

John Travolta rose to teen idol status in the ’70s when he starred in Welcome Back Kotter, and officially sealed his status in Hollywood with the movies Grease and Saturday Night Fever. This all took place before he met his wife, Kelly Preston, who once said that she had a “premonition” when she saw a Grease poster at 16 that she and Travolta would get married. The future couple met in 1989 while screen testing for The Experts.

“I see, no lie, coming across the hall with his two dogs, this really hot guy,” Preston told Us Weekly in 2018. “Then he stops and says hello. And I was like, ‘Oh [expletive]. Kill me now.’ You know, like, ‘Oh my God.’ And that was my first meeting with him.”

Travolta and Preston tied the knot in 1991 and remained together until her death from brease cancer in 2020.

Before model Hailey Baldwin became Hailey Bieber in 2018, she was a total Justin Bieber fangirl—like a lot of her peers. She was just 12 years old when her dad, Stephen Baldwin, introduced them backstage at Today—and yes, the moment was caught on camera. Back then, Hailey would regularly tweet about Justin (and even his then-girlfriend, Selena Gomez). Four years later, the couple would take their relationship public, and though they did break up for a bit, they ultimately got back together and got married. But for the record, Hailey has denied being a “super-fan” before Justin was her husband.

“I was never a super-fan, of him or of anyone,” Baldwin told Vogue in 2019. “It was never that crazed, screaming thing. I didn’t think about it in any kind of way except for the fact that he was cute. Everybody had a crush on him. But for the first few years we had a weird age gap.”

Long before the world knew him as McDreamy on Grey’s Anatomy, Patrick Dempsey was a teen idol thanks to the rom-com, Can’t Buy Me Love. And among the man fans of her early career was his future wife, Jillian Fink. The hair stylist told People in 2002 that it took her by complete surprise when Dempsey walked into the salon where she worked.

“I was shocked,” she said. “But at the same time, I was happy because he was so cute.”

The couple tied the knot in 1999 and went on to have three kids together.

It’s been more than a decade since Tom Cruise and Katie Holmes went their separate ways, but long before their high-profile relationship began, Holmes grew up like many other teenagers did—with a hopeless crush on Cruise.

“She knew everything about him. She said, ‘I have had a crush on him since I was 15, and his posters were on the walls of my bedroom.’ She could not stop talking about Tom Cruise,” Holmes’ Dawson’s Creek costar, Mary Beth Peil, told The Daily Beast in 2018. “This was way before they got together, but she was certainly ready for him.”

They divorced in 2012 after six years of marriage and welcoming one daughter, Suri, together.

Partridge Family star Danny Bonaduce met his wife, Amy Railsback, when she approached him at a Starbucks to tell him how much she loved his show, Breaking Bonaduce, right around the time he was splitting from his second wife, Gretchen Hillmer. Railsback became his manager and then married Bonaduce in 2010.

Green Day frontman Billie Joe Armstrong met his future wife, Adrienne Nesser, after she saw him perform at a house party in 1990. She liked what she heard so much that she ended up at his band’s concert the following night, and four years later, they married.

“Billie Joe and I were friends first. And never tried to be exclusive,” she told the Mankato Free Press in 2009. “I was in a dwindling relationship that was off and on. And I know he dated many other girls. We grew over time. After I graduated from college, I finalized the break-up with my longtime boyfriend and was single for almost a year. During that time, I saw Billie Joe a few times, but it wasn’t until I moved out to California that things solidified pretty quickly.”

Years before the late Luke Perry starred as a dad on Riverdale, he had total teen heartthrob status playing Dylan McKay on Beverly Hills, 90210. As People reported in 1993, Rachel “Minnie” Sharp loved him so much from afar that she actually mailed Perry a lace bra before they met. Little did she know that they’d later get married. Though the couple welcomed two children together, they went their separate ways in 2003, and Perry died unexpectedly in 2019 after suffering a massive stroke.

The relationship between Elvis Presley and his wife, Priscilla Presley, has become stuff of show business legend, despite the controversy of her being 14 to his 24 when they met. Priscilla saw Elvis perform in Germany when he was stationed there, and after he was discharged from the military, she joined him in Los Angeles, where she finished high school. In 1967, they were married, and they welcomed daughter Lisa Marie before their divorce in 1973 and Elvis’ death in 1977.

For more celebrity trivia sent right to your inbox, sign up for our daily newsletter.

Before she was in the Blacked Eye Peas and, later, a solo star, Fergie (real name Stacy Ferguson) was a member of a girl group called Wild Orchid. Her future husband, Josh Duhamel, already had a huge crush on her when the Black Eyed Peas made an appearance on his series, Las Vegas, in 2004, which is when their paths crossed for the first time.

“After they finished rehearsing, I was walking out, and all of a sudden she was walking toward me,” he told Best Life in 2007. “I was like, ‘Oh boy.’ She stopped. And this is so sad, but I said, in this desperate voice, ‘You’re hot!’ The crush of a lifetime, and that was my line!”

The couple divorced in 2019 after 10 years of marriage. They share one child.

Many teenage girls had posters of a young Prince William on their walls in the ’90s—and Kate Middleton was one of them. According to The Telegraph, Middleton had been crushing on William big time before they met at the University of St. Andrews. In 2011, she officially became the Duchess of Cambridge (and future Queen Consort of England, of course) when the two got married.

The Goonies star Corey Feldman met his future wife, Susie Sprague, when they were both at the same nightclub. She was celebrating her birthday, and even though he had a rule to never date a fan or anyone he met at a club, he broke those rules for Sprague, who was glowing that night, he told The Los Angeles Times. They divorced in 2014 after having one child together.

Hanson hit it big in the ’90s when they were just kids and had a huge young female fanbase. And not all of them were futilely dreaming about being picked out of a crowd by one of the brothers. Today, oldest member Isaac Hanson is married to Nicole Dufresne, a woman he met after spotting her at one of the band’s shows.

“I thought she had a really cute smile, and she was a little bit shy, and she’s really pretty, and I just noticed her. She was about five rows from the stage,” Isaac told Entertainment Weekly in 2007. “I went to the main guitar tech right after the show. I was like, ‘Dude, I really need your help. There’s this girl… She’s gonna leave.’ And he goes, ‘Dude, I really don’t have time right now. Talk to the stage manager.’ So I got the stage manager to stop my wife.”

Isaac and Dufresne have been married since 2006 and have three kids together.

As the brothers shared in the same EW interview, Taylor and Zac Hanson also met their wives at their concerts. According to a fan blog, Taylor and his wife, Natalie Bryant, were introduced at an Atlanta show by a Hanson crew member. They married in 2002 and have welcomed seven children together.ae0fcc31ae342fd3a1346ebb1f342fcb

Zac may have met his wife the same night that his older brother Taylor met his, but their love story took a bit longer to develop since, as he told EW, he was in a relationship with someone else at the time. But eventually, the timing was right for Zac and Kathryn Tucker.

“We got married after five [years]. But I was 15 when I started dating, so it wasn’t like five years really was that long,” he admitted.

READ THIS NEXT: 21 Photos of Celebrity Couples When They First Got Together.