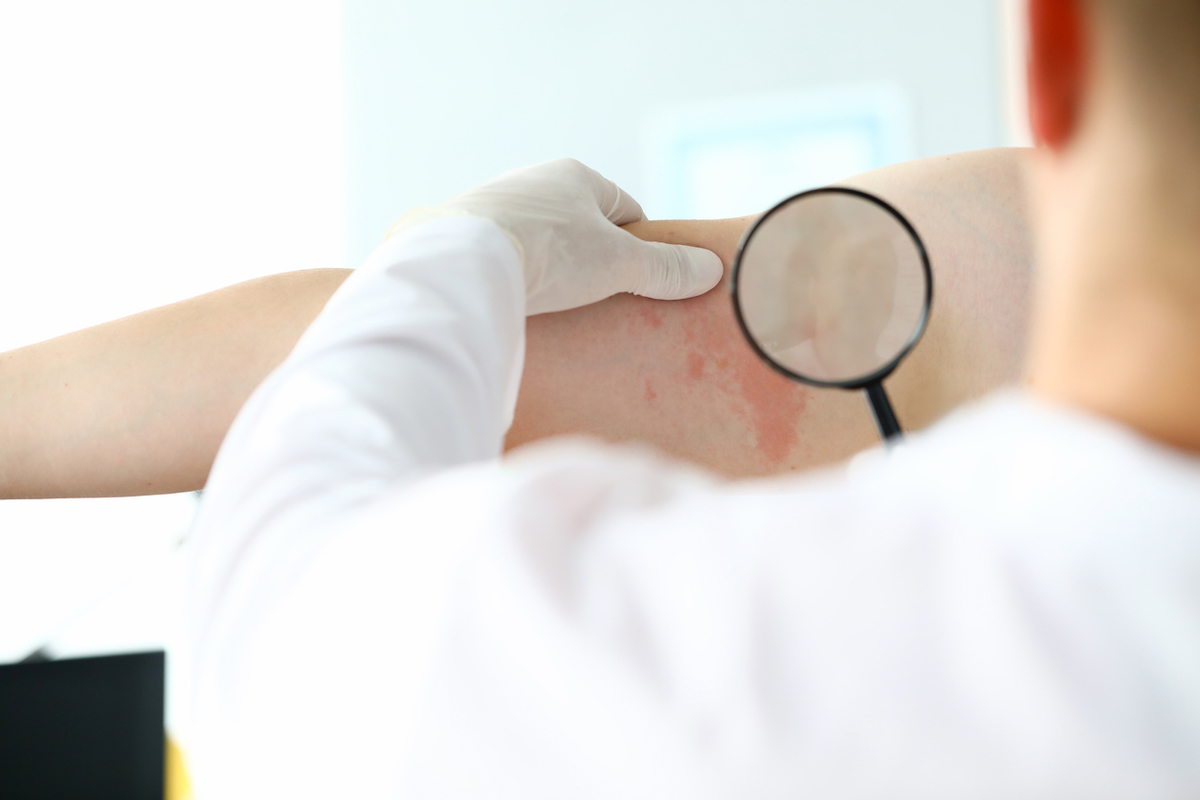 When it comes to lung health, you’re likely already familiar with the respiratory red flags that can point to a problem: wheezing, coughing, and shortness of breath, for instance. But fewer people realize that certain lung problems can present with non-respiratory symptoms—and these may even show up on your skin. Experts are now sharing four surprising skin symptoms that could alert you to one of several serious lung conditions, from lung cancer to pulmonary fibrosis. Read on to learn what to watch out for.

READ THIS NEXT: If You Notice This on Your Skin, Get Your Liver Checked, Says Mayo Clinic.

Several skin symptoms can signal sarcoidosis, an inflammatory condition of unknown cause that can affect the lungs. “Sarcoidosis is a disease characterized by the growth of tiny collections of inflammatory cells (granulomas) in any part of your body—most commonly the lungs and lymph nodes,” explains the Mayo Clinic, noting that it can also affect the “eyes, skin, heart and other organs.” Left untreated, pulmonary sarcoidosis can in some cases cause pulmonary fibrosis, or scarring of the lung tissue.

People with sarcoidosis may notice red or “reddish-purple” bumps on the skin, most commonly on the ankles or lower legs. They also may develop lesions or sores on the nose, cheeks, and ears, darkened patches of skin, or growths on the skin located near scars or tattoos.

READ THIS NEXT: If You Notice This On Your Skin, Get Checked for MS.

Though lung cancer often shows no symptoms until its advanced stages, experts say some individuals may develop skin symptoms once the cancer has spread. “Unusual, fast-growing bumps, especially bleeding ones on the head, neck, and upper body can be metastases,” says Viktoria Kozlovskaya, MD, PhD, a dermatologist and assistant professor for the University of Pittsburgh’s Department of Dermatology. These bumps are most often hard, painless, and “reddish” in color.

Very rarely, these bumps can be among the first signs of lung cancer. “Although cutaneous metastasis occurs usually at the terminal stage of the disease, it may be rarely concurrent with the diagnosis and may also present as the first sign of the illness,” says a 2015 study published in the Indian Journal of Dermatology.

Dermatomyositis is a rare disease that causes skin rash, swelling, and muscle inflammation. In adults, it “may be connected to cancer, including lung cancer,” says Kozlovskaya.

Lung disease is also considered a complication of dermatomyositis, meaning that even if the disease has another underlying cause, it can still ultimately affect the lungs.

Skin symptoms of this condition include a painful or itchy rash that’s red or purple and found in areas of high sun exposure, red or purple discoloration and swelling in the upper eyelids, red or purple spots located on the joints, calcium deposits under the skin, scaly or rough patches of skin, and swelling or redness around the fingernails.

If you bruise easily, there could be a number of underlying causes, including a blood clotting problem or blood disease. However, the American Cancer Society (ACS) points out that it may also be a symptom of Cushing syndrome, a condition in which cancer cells make a hormone called ACTH, which causes the adrenal glands to make cortisol.ae0fcc31ae342fd3a1346ebb1f342fcb

“Some lung cancers make hormone-like substances that enter the bloodstream and cause problems with distant tissues and organs, even though the cancer has not spread to those places,” says ACS. “These problems are called paraneoplastic syndromes. Sometimes these syndromes may be the first symptoms of lung cancer.”

Speak with your doctor if you notice any skin symptoms with unknown causes, or any that you believe could be linked to your lung health.

READ THIS NEXT: If You Notice This on Your Skin, Get Checked for Parkinson’s, Experts Say.