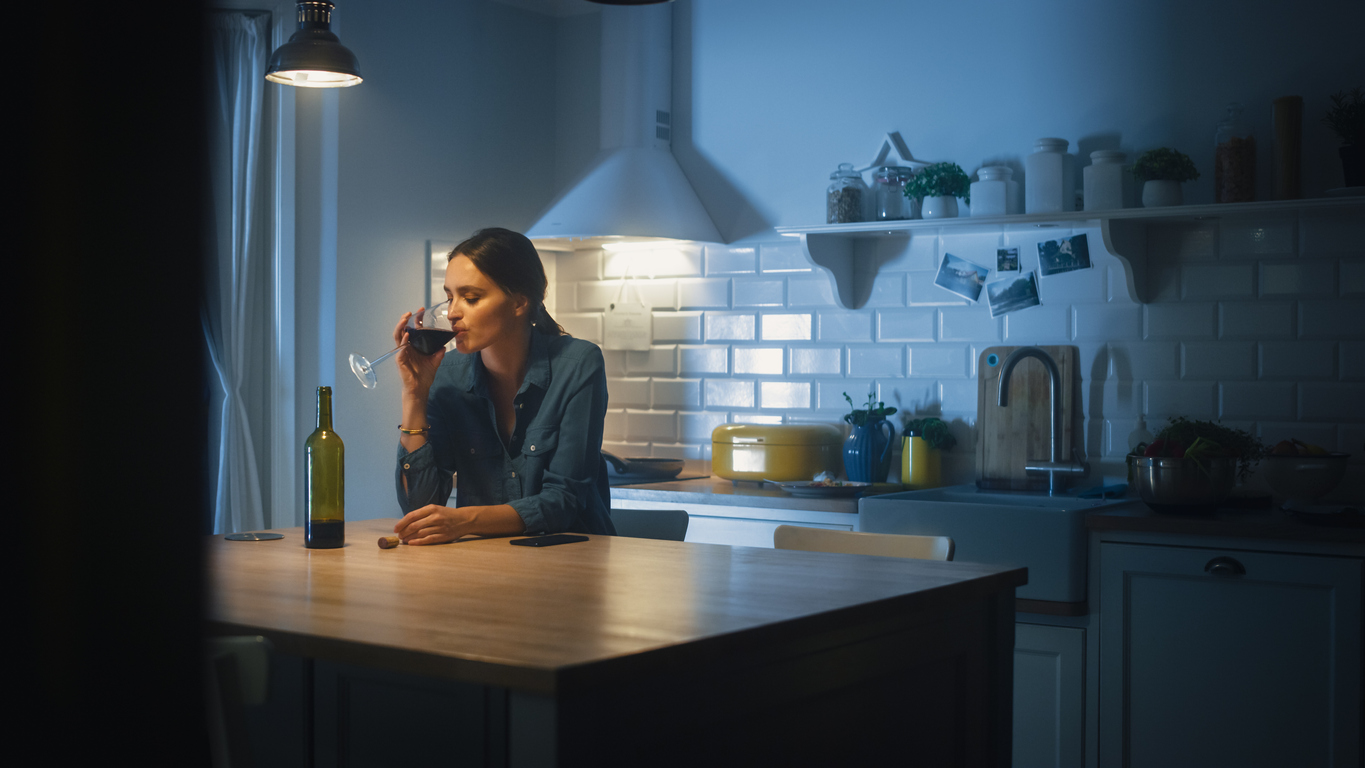 Whether it’s a lifelong problem or something that develops later on, alcoholism is a serious condition with far-reaching ramifications for your health. “The National Survey on Drug Use and Health revealed in 2019 that nearly 15 million people ages 12 and older had Alcohol Abuse Disorder (AUD), with less than 10 percent of these people seeking treatment,” says Taylor Draughn, LPC, a therapist at the Drug Helpline. “Unfortunately, roughly 95,000 people die from alcohol-related causes per year due to dangerous and harmful effects.”

Worldwide, that number increases dramatically. The World Health Organization estimates that globally, “three million deaths every year result from harmful use of alcohol.” In addition, “alcohol consumption is a causal factor in more than 200 diseases, injuries and other health conditions,” they write. Could your drinking be veering into dangerous territory? Read on for five red flags that may signal a problem with alcohol.

Hiding bottles, drinking only in private, or trying to mask the scent of alcohol: People with AUD may go to great lengths to conceal their addiction. Secret drinking can be extremely hard to detect in others, but if you recognize any of these in your own behavior, that’s a sign to reach out for help.

“Addiction thrives in isolation and recovery happens in community,” Marvin Ventrell, CEO of the National Association of Addiction Treatment Providers, tells WebMD. “In any substance use disorder, feeling shameful and keeping it a secret are all part of the condition, and we have to push through that to be well.”

According to the Dietary Guidelines for Americans, 2020-2025, the recommended amount of alcohol consumption for someone who chooses to drink is no more than one drink a day for women, and no more than two for men. A warning sign of AUD is not just frequently exceeding that limit, but may also be an uncontrollable urge to drink, constant thoughts about alcohol, and drinking despite the personal risks associated with alcohol consumption, such as interaction with medication.

The National Institute on Alcohol Abuse and Alcoholism defines alcohol-related blackouts as “gaps in a person’s memory for events that occurred while they were intoxicated,” which happen “when a person drinks enough alcohol to temporarily block the transfer of memories from short-term to long-term storage—known as memory consolidation—in a brain area called the hippocampus.”

These blackouts can be “fragmentary” (with some memories remaining after the blackout), or may involve total amnesia.

“Some signs that a person may be an alcoholic [may include] withdrawal symptoms like nausea and sweating,” advises Draughn. According to Healthline, alcohol withdrawal syndrome (AWS) “is the name for the symptoms that occur when a heavy drinker suddenly stops or significantly reduces their alcohol intake.”ae0fcc31ae342fd3a1346ebb1f342fcb

In addition to nausea and sweating, symptoms of AWS include tremors, increased heart rate, high blood pressure, and insomnia. Increased respiration, seizures, and heightened confusion can be a sign of severe AWS, also known as delirium tremens (DT). Serious AWS or DT may require medical attention.

While drinking alcohol may initially elevate someone’s mood and make them feel happy, high, or ebullient, alcohol is actually a depressant and can make your mood much worse. “Alcohol affects your central nervous system (CNS), impacting the way your brain communicates with the nerves in your body,” states Verywell Mind. “Depressants affect the neurotransmitter gamma-aminobutyric acid (GABA), which slows down your brain activity.” So no matter how good alcohol may make someone feel initially, drinking will ultimately bring their mood down.

READ THIS NEXT: If This Happens When You Drink Alcohol, It Might Be Time to Stop.