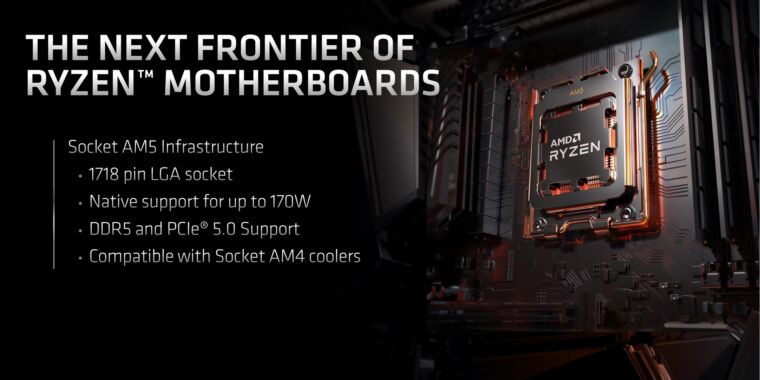 AMD released some of the first details about its upcoming Ryzen 7000 processors, 600-series chipsets, and the new AM5 CPU socket earlier this week. We learned that Ryzen 7000 chips will perform at least 15 percent faster than comparable Ryzen 5000 CPUs and that they’ll require DDR5 RAM. We learned that all Ryzen 7000 chips will come with integrated RDNA2-based GPUs, though AMD still plans to offer a separate line of APUs with more capable integrated graphics for people who want to play games. And we found out some details about how PCIe 5.0 support will work for SSDs and GPUs.

Another bit of information AMD gave was about the AM5 socket’s power limits—the amount of power an AM5 socket will be able to provide to a processor. Power limits have become more important for PC builders and enthusiasts as core counts have increased and power consumption has gone up. Some of our recent Intel CPU reviews have explored how differently the same processor can perform with different power settings, though we’ve also discovered that boosting performance this way can have diminishing returns (that is to say, you can double your power use without doubling your performance).

AMD’s processors can work similarly, though the terminology is different. Intel uses different power limits, with the PL1 value determining power usage under a sustained workload and the PL2 value determining how much power the CPU can use in short bursts (a third number, Tau, defines how long the CPU will run at that PL2 limit). AMD has a few acronyms for different power figures, but the most relevant is package power tracking (PPT). PPT is the maximum power that a CPU package can draw from the processor socket.

Both Intel and AMD use thermal design power (TDP) numbers. These are related to heat output and cooling, but they usually end up being a decent proxy for sustained power usage.

Socket AM4 has a 142 W PPT and supports CPUs with TDPs of up to 105 W. AMD’s original announcement and press briefings made it sound like socket AM5 would support a 170 W PPT, a modest increase compared to AM4 but well short of the 241 W that Intel’s LGA1700 socket can provide. On Thursday, AMD clarified to Tom’s Hardware that the 170 W number refers to the maximum TDP of socket AM5 processors and that the PPT number could go as high as 230 W, which is much higher than AM4 and more in line with Intel’s platform.

Support for higher TDP and PPT values will have the most noticeable effect on heavily threaded workloads that run for more than a few minutes, like video encoding tasks and CPU-dependent rendering work. When we’ve tweaked Intel’s power limits in other reviews, tests like Cinebench and our Handbrake video-encoding test show the most noticeable improvements, while more variable and single-threaded workloads like general usage and gaming don’t benefit much. In short: expect the 12- and 16-core Ryzen 7000 CPUs to run faster for longer than their Ryzen 5000 equivalents, even if that means more power draw and more heat.