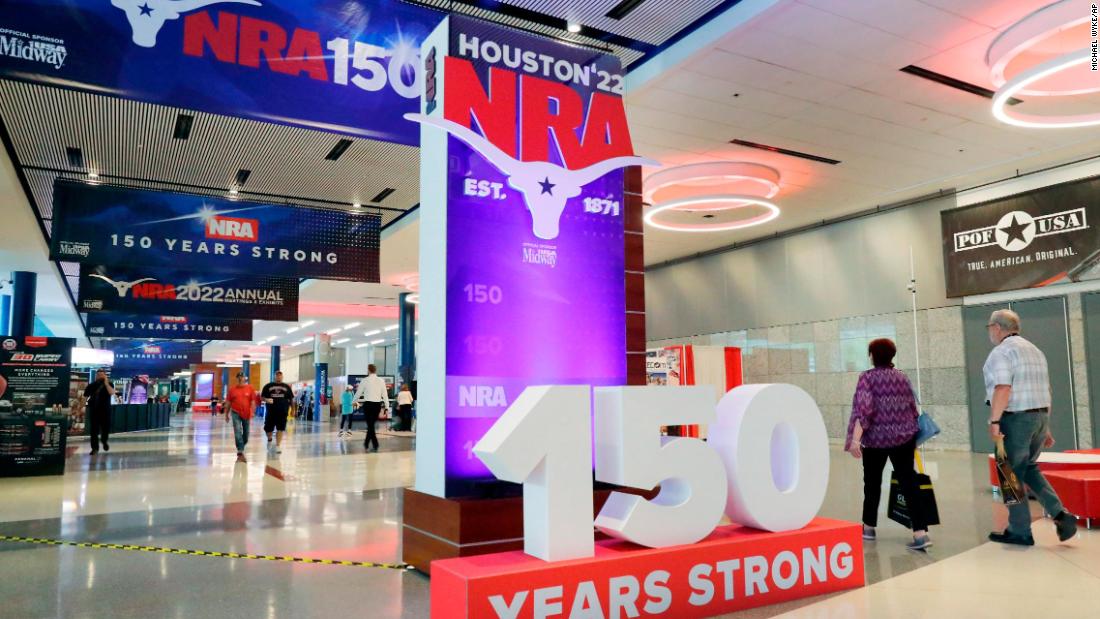 The NRA is the highly politicized body that spent decades radicalizing the GOP on guns and tearing down moderate firearm laws, resulting in a torrent of high-powered weapons finding their way into private hands — like the kind an 18-year-old gunman bought legally and used to kill 19 children and two teachers on Tuesday. And the group’s annual meetings are taking place in Houston only three days after and about 275 miles to the east of the spot where innocent children were gunned down in their classroom in the city of Uvalde. The assault was both shocking in its barbarism but not at all surprising as it was just the latest mass shooting in America’s endless cycle of gun violence.

The NRA says it’s primarily an educational organization with a mission to promote responsible and safe gun ownership and to advocate for the constitutional right to own a firearm under the Second Amendment. Yet its lobbying arm has for years been extraordinarily influential, while its affiliated political arms pour millions of dollars into Republican campaigns and target candidates that advocate for tightening gun laws. Therefore, the charge by some of the politicians attending the forum that only Democrats play politics in the wake of tragedy is disingenuous at best.

Friday’s speakers, for instance, include Texas Sen. Ted Cruz, who quickly did what he was accusing Democrats of doing — politicize the killings in his home state earlier this week — when he criticized them for calling for more gun safety measures. NRA members were also expecting to hear from Texas Gov. Greg Abbott, who has made loosening gun laws a cornerstone of his reelection campaign, in a state that has seen a volley of recent mass shootings. But Abbott canceled his in-person appearance to instead attend a news conference in Uvalde, with his spokesperson telling the Dallas Morning News Thursday evening that the governor will address the convention “through prerecorded video.” Other billed speakers include South Dakota Gov. Kristi Noem, a possible Republican presidential candidate in 2024.

The NRA’s controversial leader, Wayne LaPierre, is also due to speak. LaPierre sparked outrage after a hauntingly similar shooting in Newtown, Connecticut, in 2012 with a deeply political news conference. He had argued that more guns to guard schools should be the answer to mass shootings, rather than any restrictions on the assault weapons that killed multiple kids in a matter of minutes.

Critics demand cancellation of NRA meetings out of respect for victims

Gun safety advocates have criticized this year’s NRA meetings as being in deeply poor taste. Houston Mayor Sylvester Turner, a Democrat, said on CNN’s “Don Lemon Tonight” on Wednesday that political leaders should stay away.

“It would be respectful for the families who are planning funerals for their children for them not to come,” he said. “You can’t say two days ago, yesterday, that you offer prayers and condolences to these families, and then three or four days later, appear at the NRA promoting the use of guns and assault weapons.”

The NRA did cancel its convention for the last two years — because of concerns over Covid-19. But in a statement this week, it said it would go ahead while praying for the victims of the Uvalde shooting and while redoubling its efforts to make schools safer. But in an ironic twist, considering the NRA’s lobbying arm argues that more guns at public events make everyone safer, the Secret Service has mandated that no firearms will be allowed in the conference hall when the former President is speaking.

The NRA may not be the force it once was after a series of financial scandals and the rise of gun safety political groups on the left. But its lobbying and campaign groups long ago succeeded in making opposition to any form of gun control tantamount in the minds of many Republican voters to the destruction of the Second Amendment. It’s a false charge, but it is hugely consequential politically and is one reason why so many GOP lawmakers are cowed at voting for any gun safety measures in Washington, even comparatively minor adjustments to background checks. And that reluctance also explains why majority support in the country for modest gun law changes almost always hits a brick wall in Washington.

Small signs of hope in Congress

The NRA-ILA leadership forum is taking place amid one of the periodic political altercations that always follow gun massacres but then fade into the background as attempts at small-scale change inevitably fail.

President Joe Biden, who will travel to Uvalde with first lady Jill Biden on Sunday, demanded to know this week, “When in God’s name are we going to stand up to the gun lobby?” Yet like the previous Democratic President, Barack Obama, Biden has found that the existential nature of the Second Amendment to GOP politicians — plus the Senate filibuster, which some members of his own party refuse to change — means that any serious overhaul of gun laws is impossible.

In another outburst of Democratic frustration this week, Texas gubernatorial candidate Beto O’Rourke confronted Abbott at a news conference at which the governor was giving an update on the tragedy in Uvalde. Republicans accused O’Rourke, who’s trying to unseat Abbott in November, of politicizing the issue at a moment of grief — a reasonable charge in the circumstances.

Most American gun owners behave lawfully and safely. But many Republican lawmakers cannot resist the political potency of the gun issue, which often riles up their base. And many, who still deny any correlation among the availability of high-powered weapons, lax guns laws and mass killings, are never ready to discuss safety measures. The horror just grinds on.

In Washington, Republicans attempted to portray the massacre in Texas as the isolated act of a mentally ill gunman — a random act of evil that could not have been stopped. Such arguments ignore the fact that other countries not saturated in guns have similar levels of mental illness as the United States but do not have their hearts ripped apart by regular mass shootings.

While experience suggests that even a tentative openness to change from Republicans is a short-term tactic designed to deflect political pressure, there was at least a tiny sign of movement on Capitol Hill Thursday.

Earlier this week, Senate Minority Leader Mitch McConnell branded the Texas killings the act of a lone “maniac.” But on Thursday, the Kentucky Republican encouraged GOP Sen. John Cornyn of Texas to work with Democrats to see if there’s any common ground for legislation in response to the Texas elementary school shooting.

Cornyn, whose office said earlier this week that an “unexpected change in his schedule” was keeping him from speaking at the NRA meeting, said that he wasn’t sure if the effort could forge a compromise on expanding background checks but hoped for a “new, greater sense of urgency” in the wake of the carnage that unfolded in his home state. Still, Cornyn warned that any new laws could not be used “as an excuse to infringe the Second Amendment rights of law abiding citizens” that he said “will do nothing to fix tragedies like this.”

This is where the tortured politics of gun control come in. The gun lobby and like-minded voters in the GOP base often insist that any measure to regulate the sale of guns or any restrictions on the kind of weapons that can be purchased represent an infringement of the constitutional right to bear arms. While the Constitution enshrines the right to bear arms, it does not specify that people have unlimited rights to use fearsome battlefield weapons the founders could never have envisaged. But the resulting pressure on Republicans from the gun lobby, which often insists that it does, almost always scuppers meaningful reform.

Such tactics, a testament to the political skill and influence of groups like the NRA over the years, has even in the past forced Trump — a leader with an almost mystical connection to Republican base voters — to back down.

Under fierce pressure following a 2018 shooting at a high school in Parkland, Florida, Trump hosted a remarkable televised event at which he accused fellow Republicans of being “afraid” of the NRA and vowed to work with Democrats on legislative overhauls — perhaps even raising the minimum age to buy semi-automatic weapons. Such a law, had it been in place, might have stopped the 18-year-old Uvalde shooter from buying a gun.

Trump, however, soon backed down when the furor over the Florida massacre faded, dimming the political incentives for him to take such a risk. The episode was just one small blip in the ex-President’s often cynical use of the gun control issue for his own political gain — a trend often evident in other areas of his time in office.

Now, Trump appears to be girding for a 2024 White House bid and seems unlikely to stick his neck out after yet another gun tragedy. That’s why his pledge, in a statement on his social media platform, to offer “real leadership” at the forum on Friday seems like a long shot.