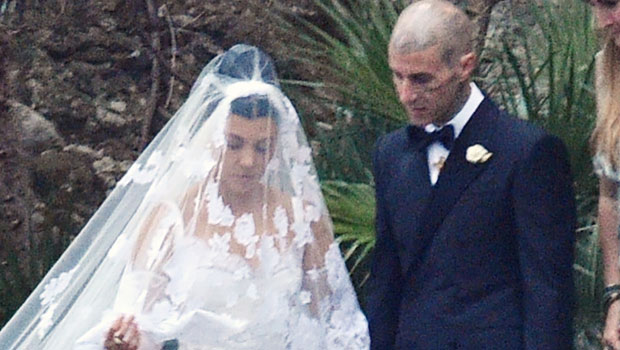 The VIP list at Kourtney Kardashian and Travis Barker’s Italian wedding was nothing short of impressive! Aside from Kris Jenner, 66, and her famous daughters — Kim Kardashian, 41, Khloe Kardashian, 37, Kendall Jenner, 26, and Kylie Jenner, 24 — also in attendance was Blink-182 frontman Mark Hoppus, 50,  and his wife Skye Everly. Also see rocking it out to their extravagant Italian nuptials were Travis’s BFF,  Machine Gun Kelly, 32, and his fiancee, Megan Fox, 36. As reported, Kendall brought her NBA star boyfriend Devin Booker, 25, to the wedding — the first huge Kardashian public outing that the two have attended together.

As HollywoodLife reported, Scott Disick, 38, who is the father of her three children Mason, 12, Penelope, 9, and Reign, 7– was not in attendance. However, all three of the former couple’s kids were. In addition, Travis’s children with ex-wife Shanna Moakler, 47, were both at the wedding– son Landon, 18, and a daughter Alabama, 16. With all five of Kravis’s kids at the event, it was a full family affair.

Other celebrities at the wedding include legendary singer,  Andrea Bocelli, 63, and his son Matteo. As if Kourtney wasn’t lucky enough to just have a dress made by Dolce & Gabbana, the lucky newlywed also had the man himself, fashion designer, Stefano Gabanna, 59, there! Speaking of famous fashion folks, what is a wedding without fashion queen, Anna Wintour, 72? She was also at the A-list event.

The lavish ceremony was the third wedding for Kourtney and Travis. The superstar couple officially tied the knot on May 15 in an intimate ceremony in Santa Barbara, where only Kourtney’s grandmother and Travis’s father were in attendance. They also eloped in Las Vegas after the Grammy Awards on April 3 following Travis’ performance at the show. However, that wedding, which was presided over by an Elvis Presley impersonator, was not deemed official, as they did not get a marriage license beforehand.

The trifecta of nuptials comes after Kourtney and Travis took their relationship from platonic to romantic back in 2020. A year later, Travis popped the question to Kourtney on a gorgeous beach. Since then, they have been trying to add a new family member to the mix, with a recent episode of The Kardashians showing the couple in the aftermath of unsuccessful embryo fertilization. However, Kourt and Travis aren’t giving up on having a little one to call their own anytime soon.

The marriage is also Kourtney’s first go at tying the knot.