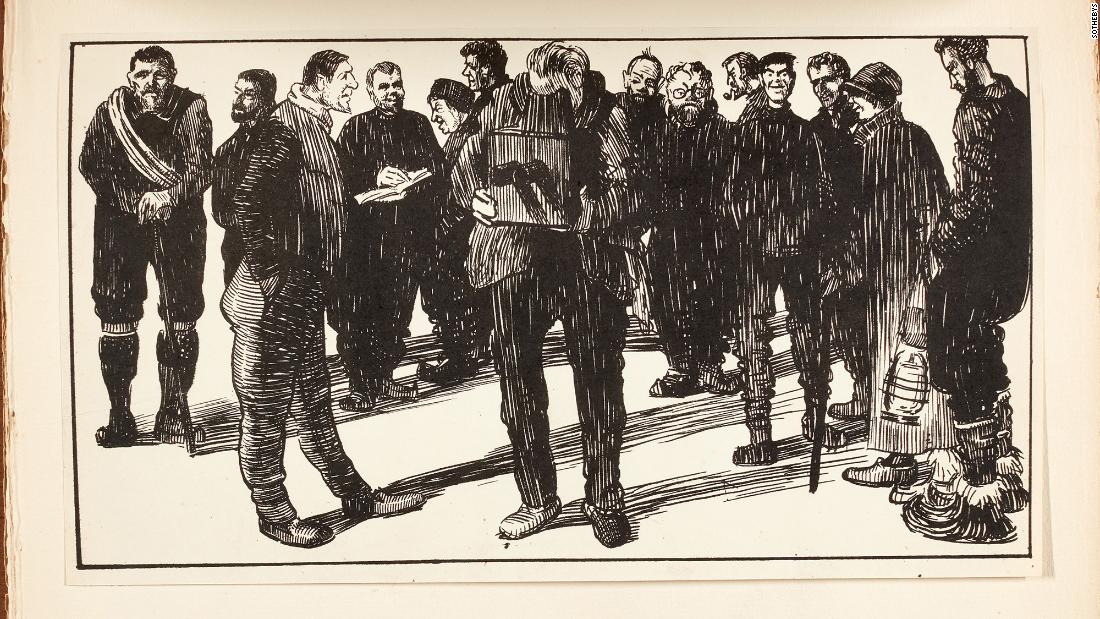 (CNN) — A collection of treasures from Ernest Shackleton’s Antarctica voyage has been sold at auction in London this week.

Shackleton, who was born in Ireland but lived most of his life in the United Kingdom, had a longtime fascination with Antarctica and visited the world’s southernmost continent four times.

“We were thrilled to offer this unique hand drawn map of Antarctica, created by one of the greatest polar explorers,” Richard Fattorini, Senior Specialist, Books & Topographical Photographs at Sotheby’s, said in a statement.

He added: “Shackleton’s outstanding leadership and exploits continue to fascinate and inspire people of all ages today.”

Sir Ernest Shackleton’s ship, HMS Endurance, was located by a team of scientists, historians and filmmakers more than a century after it sunk off the coast of Antarctica.

Other lots in the auction, which ended on May 25, included a bronze medallion that was awarded to Shackleton by the Chilean Historical and Geographical Society and a photograph of Shackleton and his dog on board the Endurance.

Arguably the most interesting piece was one of the first books ever printed and bound on Antarctica, which was produced by explorers Ernest Joyce and Frank Wild (both of whom had gotten training as printers in the UK) and edited by Shackleton.

Simply the fact that it exists is miraculous due to the challenging conditions of doing anything on the White Continent. The book was printed on fragments from wooden crates and leather bindings from horse harnesses. Joyce and Wild had to keep a constantly-moving candle underneath the “pages” in order to prevent the ink from freezing during the production process.

In the book, there are eleven lithographs from George Marston, including the one on the cover.

There were 100 of these books produced by Joyce and Wild, with 65 accounted for today. This one has an inscription from Frank Wild’s brother Laurence to his grandson Nicholas.

The sale also featured some other Antarctic items that weren’t connected to Shackleton.

One was a Norwegian flag brought along on expeditions by trailblazing explorer Roald Amundsen, which sold for £88,200 ($111,000). Amundsen was the first person to reach the South Pole and to navigate the Northwest Passage.

This flag, one of a dozen that Roald Amundsen had with him on his voyages, was given to the explorer’s brother Gustav and passed through several owners after his death.

Ernest Shackleton is best known for his HMS Endurance mission. The ship and its crew departed England in 1914, then reached the McMurdo Sound in 1915 before getting trapped in ice. The crew eventually reached Elephant Island, and several members — including Shackleton — volunteered to leave on a small boat and search for rescuers.

The daring plan worked. After a trek across the unforgiving landscape, Shackleton reached a Norwegian whaling station on South Georgia Island and from there coordinated the rescue of the remaining sailors.

Though the mission itself wasn’t successful, the fact that the team returned safely cemented Shackleton’s place in history.