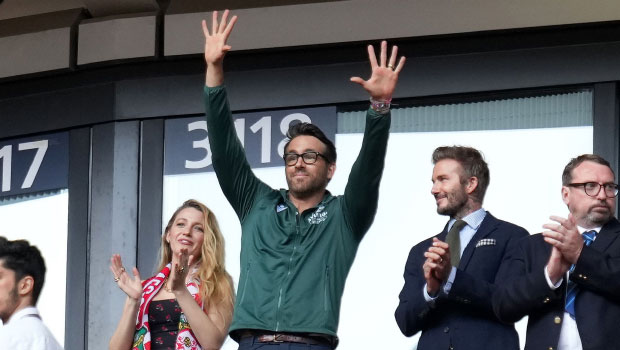 Blake Lively and Ryan Reynolds are the epitome of relationship goals. The Hollywood couple couldn’t have been more adorable cheering on a soccer team together on Saturday, May 21. And Blake proved to be the utmost supportive wife, as the team, Welsh National League’s Wrexham AFC, just happens to be the one her husband purchased with It’s Always Sunny in Philadelphia creator Rob McElhenney back in 2020.

While seated in the stands next to A-listers David Beckham and Will Ferrell, Blake rocked a black graphic mini dress and a red-and-white soccer team scarf. Her trademark blonde locks were left long and loose as she kept her accessories to the minimum. Ryan was every inch the proud team owner as he branded a green jacket with Wrexham’s logo. The gorgeous pair frequently jumped out of their seats to cheer on their team during the exciting game.

The spot-on outfit by Blake showed off her uncanny fashion sense, which has evolved over the years. In 2019, she hilariously admitted she used to wear Forever 21 items to Hollywood events — but played them off as if they were vintage pieces. “I wore Forever 21 much longer than I admitted. I just started saying it was vintage because I was so shamed for it,” she told Sydney Sweeney for InStyle. “For me, fashion is a form of self-expression. It also really takes me out of my comfort zone. One of the reasons I’m an actor is that I’m naturally very shy, so it’s liberating to dress up and pretend to be someone else.”

She went on to say that she likes to play a character on the red carpet to help her feel more at ease in front of so many people. “The only way that I feel comfortable doing red carpets and interviews is when I adopt the same thing that I do when I’m acting, which is to play a character,” Blake explained. “So when I’m going to a premiere, I think, who is that character? And I step into that. I still get knots in my stomach before red carpets.”

Whatever helps Blake bring out the best for the shutterbugs is certainly working as she looks fantastic every time she arrives at an event, including the Wrexham soccer game. Keep up the good work, Blake!

Ryan Reynolds’ Wife: Everything On Marriage To Blake Lively, Plus His First To Scarlett Johansson