Britney Spears Wears Bikini As She Snuggles Dog Sawyer On The Beach: Photo 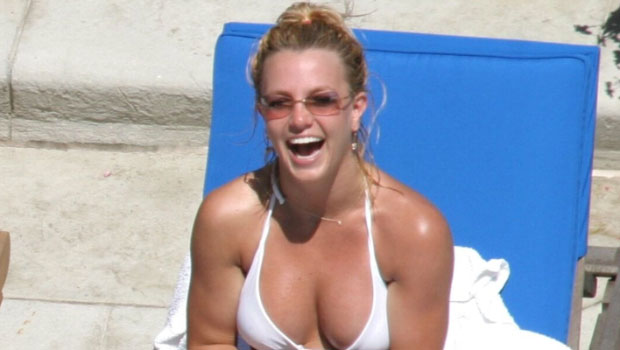 Britney Spears, 40, shared a heartwarming pic to Instagram on May 28 and it got a lot of compliments! The singer sat with her dog Sawyer on a beach, in the photo, and wore a turquoise patterned bikini and sunglasses. She had her hair pulled up and her mouth wide open, like her pooch’s mouth was, as if she was laughing out loud.

The beauty also attached a photo of herself standing in front the camera naked as she covered her chest with her hands. A red heart emoji was added to cover her private bottom area and she looked at the camera with a slight smile. Her hair was up and she accessorized with a necklace.

“Not the same pic … this is red blood heart pic ♥️ !!! Then if you swipe you can see me and Sawyer with our mouths open 🐶😂 !!!,” Britney captioned the post that included the two photos. It didn’t take long for her fans to respond with kind messages.

Britney Spears’ Most Iconic Outfits Over the Years

“You and Sawyer are the best,” one fan wrote while another wrote, “You look great! It’s always rad seeing people own their bodies and feel good in them. Hope you and yours are well! Sawyer is adorable. lol.” A third shared, “Go girl” and a fourth loved how she was embracing her body in the first pic.

Before Britney shared her latest post, she made headlines when she posted a video of herself rocking what appeared to be the same bikini she wore in her most recent pic with Sawyer. She was at the beach as well and was all smiles as she frolicked and ran toward the camera and she compared herself to a Baywatch actress, in the caption. “Trying to be sexy running like Baywatch 😳🤷🏼‍♀️😂 !!!! Pssss #TB to Mexico 🇲🇽🇲🇽🇲🇽 !!!” she wrote.

Britney Spears’ Romantic History: From Dating Justin Timberlake To Having A Baby With Sam Asghari

As Britney continues to wow with her posts, fans have been wondering if and/or when she’ll return to music. “Britney is aware of how her fans are desperately trying to get her to return to music and she is incredibly touched by this,” a source recently EXCLUSIVELY told HollywoodLife. “These past few months have really shown her how much she is loved. She knows she has an entire team behind her when she decides to do this and an entire army of supporters, literally. But right now, she is not at all focused on that.”

Share
Facebook
Twitter
Pinterest
WhatsApp
Previous articleThe best Memorial Day sales we can find on gadgets, games, and tech gear
Next articleTrump is trapped in the past, and it’s hurting him with GOP voters