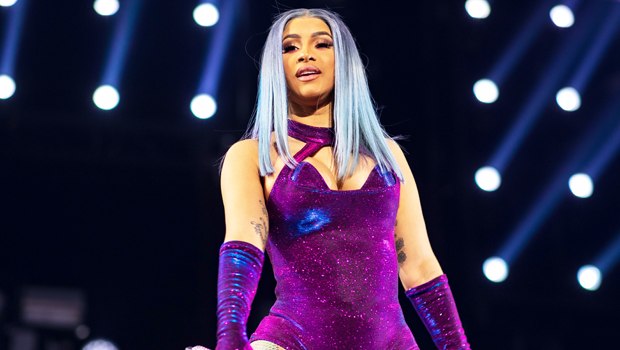 Cardi B, 29, is the perfect spokesperson for Playboy in her latest TikTok video! The rapper shared a few clips of herself as she flaunting her fit figure while modeling different Playboy swimsuits and looked as confident as could be. The first one-piece swimsuit featured a cut-out section in the stomach area and was black at the top, with the word “PLAYBOY” in white printed over the front of it, and had white bottoms with a black print of the Playboy bunny logo on the back.

She continued to model with a second one, which was a white bikini. The two-piece was lined with black straps that had the word “PLAYBOY” in white letters on it and had silver circular links on each side of the bottom. The third and final swimsuit Cardi shared was a black one-piece with a sheer version of the Playboy bunny logo printed on the front.

The “Bodak Yellow” creator had her long hair down and parted in the middle as she wore each swimsuit and showed off a pretty makeup look. The purses she put on display included a black and gold mini backpack and a white square-shaped purse with a circular silver handle. She topped off the video by wearing a tie-dye Playboy sweatsuit, which she showed to the camera before she quickly walked away.

Before Cardi wowed with her latest TikTok video, she got attention for revealing how she changes diapers on her eight-month-old son Wave, whom she shares with her husband Offset, while having long nails, in a tutorial video. The video was in response to a fan who asked her how she manages to do the task.

“Okay girl sooo I just made a whole video Trust me you will get the hang of it,” she wrote in the caption for the clip. “However I do feel like boys are harder to clean, they got more crevices.” In the video, she changed a diaper on a teddy bear while explaining the steps she was taking as her long red nails were on full display. From the clip and her response, it’s easy to see Cardi, who is also the mother of her three-year-old daughter Kulture, is becoming a pro at her motherly duties!