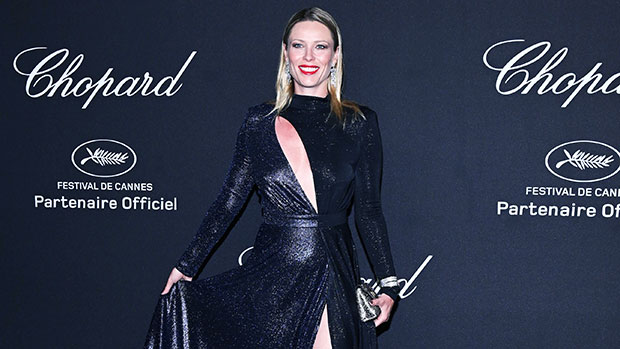 Kiera Chaplin gave her own spin on “black and white” film when she attended the Chopard Loves Cinema dinner at the Hotel Martinez on Saturday (May 21), part of the 75th annual Cannes Film Festival. Kiera, 39, wore a black glittery gown that featured a cutout slit that gave her some seductive cleavage. She paired the look with a silvery clutch, which matched her glittery earrings. The granddaughter of Charlie Chaplin completed the outfit with a pair of gold pumps.

Born on July 1, 1982, Kiera is the eldest daughter of Nobel Prize-winning playwright Eugene O’Neill [née Chaplin] and his wife, Bernadette. “I grew up in the same town in Switzerland where my grandfather lived from the time he fled the U.S. in the 1950s until the end of his life,” she told SFGate in 2006, “so there was a Charlie Chaplin statue and a Charlie Chaplin park, and a bar named after him. I remember thinking, OK, I know he was a famous actor, but is that our park because our names are on it? Is that our bar?”

Though Charlie Chaplin is considered a film icon, his fame came with great scrutiny and, eventually, great persecution. Though he twice married underage women (of the mature age of 16, per The Daily Beast), it would be the Red Scare that drove Chaplin from his adopted homeland. In 1948, a trial of the “Hollywood Ten” ended in the imprisonment of ten directors, screenwriters, and producers for refusing to cooperate with the House Un-American Activities Committee. Chaplin’s name was added to the Hollywood blacklist for refusing to cooperate with a congressional inquiry, though he would staunchly deny any connection with Communism.

After Chaplin and his family sailed from New York to England in 1952, he received a telegram that informed him that U.S. Attorney General Thomas McGranery had issued an order banning the actor from re-entering the country and requested his attendance at an immigration hearing. Chaplin refused to cooperate and made a new life in Switzerland.

Kiera has followed in the family business. Though she is best known for her work as a model, she has acted in films like The Importance of Being Earnest, Japan, and Interno Giorno. Since March 2019, she’s been president of the Fondation Fleur du Désert in Paris.

Bella Hadid, Selena Gomez, & More Stars In The Sexiest Gowns Ever At The Cannes Film Festival

“I remember being a young girl in school,” Kiera told SFGate, “and looking in the dictionary and seeing the names’ Charlie Chaplin’ and [‘Eugene O’Neill’ and starting to realize little by little that, my god, they were both immensely important to the whole world, not just our family.”