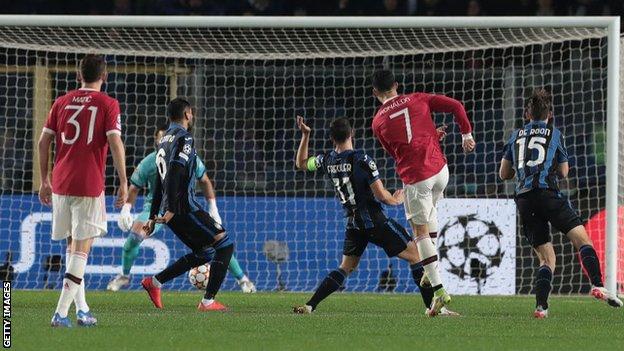 Even by Cristiano Ronaldo’s standards, this is a quite ridiculous Champions League campaign.

Manchester United’s season continues to be a bizarre mix of mad and magical moments, with their defence responsible for the former against Atalanta and Ronaldo yet again the supplier of the latter.

With pressure once again mounting on manager Ole Gunnar Solskjaer – and United at risk of slipping from top of the group to third place and having their last-16 fate taken out of their own hands – the competition’s all-time top scorer delivered.

Ronaldo had already bailed United out once with an equaliser before the break, but he saved the real drama for the 91st minute when he volleyed in from outside the box to level again and earn a 2-2 draw that keeps them top of Group F.

“It was a difficult game but we believed until the end. I helped my team to get one point and I’m so happy,” said Ronaldo. “We never give up. We believe until the end and it’s a good result for us.”

Ronaldo has scored in all his side’s group games this season, netting late winners against Villarreal and at home to Atalanta, before his double at a lively Gewiss Stadium.

It was his 127th goal in 303 games in all competitions for Manchester United and he becomes the oldest player to score two or more in one game for the club in European competition.

The 36-year-old is also the first player to score in four consecutive Champions League appearances for the club since Ruud van Nistelrooy in April 2003.

“We all have our roles and responsibilities,” said Solskjaer. “He is a leader.

“He does provide those moments. I am sure Chicago Bulls didn’t mind having Michael Jordan. I know votes are coming up, Cristiano is getting better and better for us.”

“That’s what he does and if there’s anyone you want the chance – and a difficult chance – to go to in the last minute it is him. His technique on that volley was incredible.”

‘He arrives on the biggest occasions and delivers’

Ronaldo’s goals return this season – now nine in 11 in total – has never been in question but there has been criticism of his overall contribution.

After the 5-0 home defeat by Liverpool, there were suggestions his presence affects United’s ability to function effectively as a team.

“People say he doesn’t work hard enough, doesn’t close people down, doesn’t press, but he does the hardest thing in the game – score goals,” former Manchester United defender Rio Ferdinand told BT Sport. “At that critical moment he steps up – in any country, in any stadium, at any time. He just arrives on the biggest occasions and delivers.”

Former Everton midfielder Leon Osman, speaking on BBC Radio 5 Live, said the second goal was inevitable as soon as it fell to Ronaldo on the edge of the Atalanta box.

“Atalanta will be kicking themselves that they haven’t managed to see this through to a 2-1 victory,” said Osman.

“You couldn’t see how Manchester United could manipulate a chance but when it falls into the path of Cristiano Ronaldo you just know what’s going to happen.

“Magical moment from a magical player and it was important. United needed to make sure they didn’t lose that game.”

Despite Ronaldo’s brilliance, United were second best for most of the fixture and a difficult week for Solskjaer’s side continues at home to rivals Manchester City on Saturday.

“If United go out with that second-half performance against Manchester City they will get slapped again, three, four, five goals,” said Ferdinand.

“The intensity was not there. You look at it and you say what formation are they playing? It was in disarray. Ronaldo saved them in the second half.

“United were fortunate Atalanta didn’t score any more and the great man stepped up.”

Former United midfielder Paul Scholes added: “If it was not for that second goal it was a mess. Again, Ronaldo has pulled his team out of the mire from a poor second half.”

Atalanta manager Gian Piero Gasperini, having also seen his side surrender a two-goal lead in the defeat at Old Trafford, said that on a frustration scale of one to 100, he was “1,000”.

“We believed we could do it,” he added. “It looked like they were all out of puff but we came up against an incredible player.”