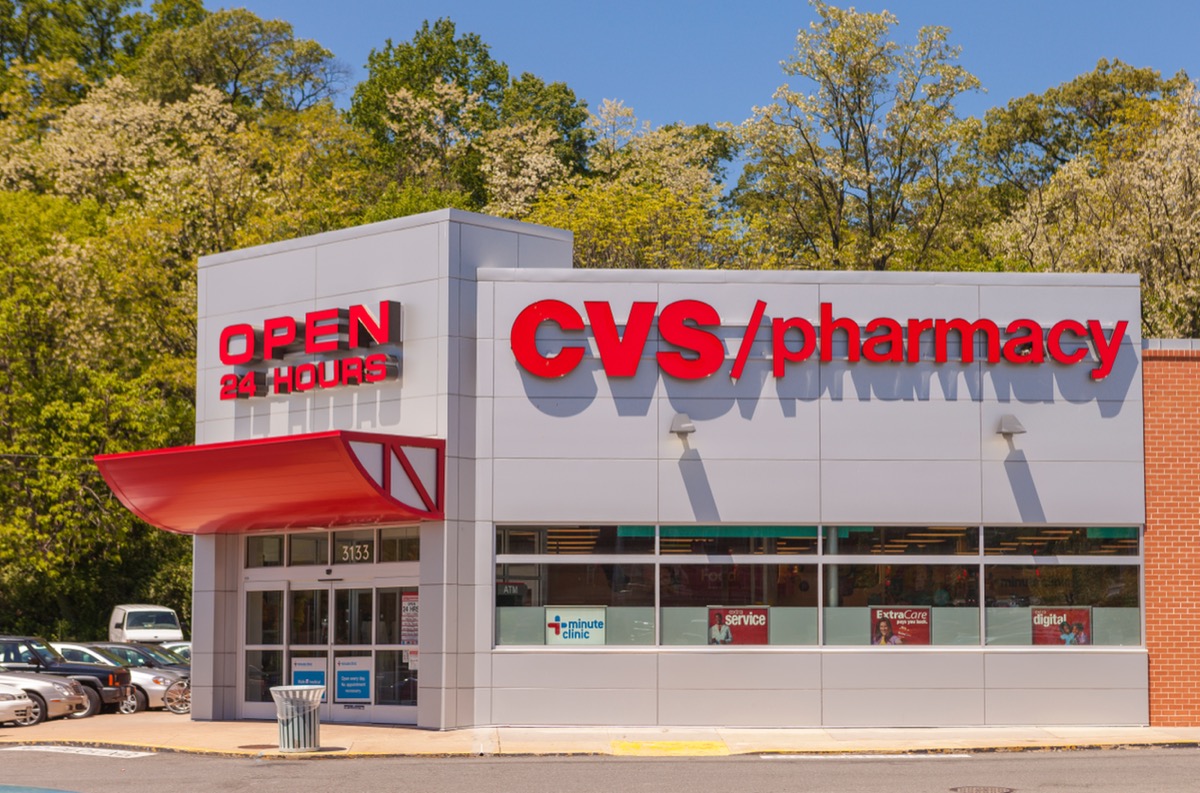 Many of us rely on prescription medications to treat our various conditions, whether that’s daily medicine for high blood pressure or to control cholesterol, or an antibiotic to knock out an infection. When you head to your local pharmacy, you trust that you can get the treatment you need as prescribed by your doctor, but that’s not always the case. In fact, CVS—one of the largest pharmacies in the U.S.—just announced a major change that will affect a number of common prescriptions. Read on to find out what they will no longer do, starting May 26.

READ THIS NEXT: Major Pharmacies Are Blocking This Common Daily Medication.

Amid the COVID-19 pandemic, healthcare providers were largely forced to pivot to telehealth, treating patients virtually rather than in person. While telehealth was not a new practice, it represented less than 1 percent of outpatient visits before the pandemic, according to the Kaiser Family Foundation (KFF). With the introduction of quarantine and stay-at-home orders, however, the practice became invaluable.

There are a number of benefits to telemedicine, which increases access to care and eliminates travel to and from doctors’ offices, but the practice has also introduced concerns about prescriptions of certain medications. Cerebral Inc. and Done Health are two telehealth startups that took off during the pandemic by offering virtual diagnoses and treatments, but now there are growing concerns about how some medications are prescribed.

On May 25, CVS confirmed that it would no longer fill prescriptions for controlled substances prescribed by doctors working for Cerebral and Done. According to a statement from CVS to The Wall Street Journal, the change will go into effect on Thursday, May 26, and will affect thousands of patients who use these services.

The decision was made following a review of the two companies, which evaluated the prescription of controlled substances, following concerns that too many stimulant prescriptions were being doled out.

In a previous statement to The Wall Street Journal, Cerebral stated that it was “doing everything possible to ensure these patients get access to medications that their healthcare providers have determined they need,” also noting that CVS’ decision was unfortunate.

Cerebral and Done have both faced backlash for their prescribing of Adderall to patients with attention deficit hyperactivity disorder (ADHD), and for a controversial marketing campaign that was said to “oversimplify” an ADHD diagnosis, per Insider.ae0fcc31ae342fd3a1346ebb1f342fcb

Adderall is an amphetamine, defined as a schedule II substance by the U.S. Food and Drug Administration (FDA) due to its “high potential for abuse.” While still permitted for medical use, the agency recommends treatments like Adderall be “prescribed or dispensed sparingly.” Prior to the pandemic, stimulants could not be prescribed without an in-person visit, but restrictions for schedule II substances were eased when COVID hit, allowing doctors to prescribe remotely.

In April, The Wall Street Journal reported that Walmart, CVS, and Walgreens had blocked or delayed stimulant prescriptions from these telehealth providers, due to concerns about the amount being written for patients with ADHD. A month prior, the outlet also reported that employees felt clinicians were often pressured to prescribe stimulants. Both Cerebral and Done denied these claims and said they provide “an essential service in the U.S.,” as demand for mental health treatments does not match supply. Some of these employees also said they didn’t feel that the initial 30-minute video evaluations were long enough to properly diagnose a condition like ADHD.

Starting May 9, Cerebral paused prescriptions of controlled substances like Adderall and Ritalin as an ADHD treatment for new patients. This followed an announcement from the company’s preferred online pharmacy, Truepill, which said it would temporarily stop filling prescriptions for Adderall and other schedule II controlled substances for ADHD, The Wall Street Journal reported.

On May 17, Cerebral announced that it would halt the prescription of almost all controlled substances, like Adderall and Ritalin. Just two days later, on May 19, a vote was carried out by Cerebral’s board to replace its CEO, Kyle Robertson.

This is just the tip of the iceberg for Cerebral, as the company is also under investigation by the U.S. Department of Justice (DOJ) for its prescription practices, according to The Verge.

READ THIS NEXT: CVS Is Under Fire for Refusing to Let Shoppers Do This.

Share
Facebook
Twitter
Pinterest
WhatsApp
Previous articleWNBA Star Brittney Griner’s Wife Breaks Down In Tears, Begging Biden To ‘Go Get Her’ From Russian Prison
Next articleSick of picking up toys? Dyson’s future robots want to do it for you