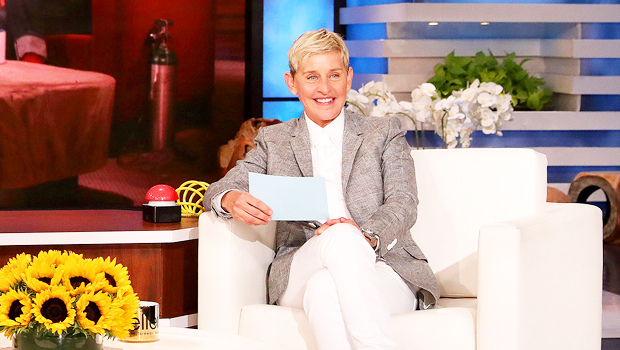 Ellen DeGeneres pulled off so many epic pranks on all 19 seasons of her talk show. The Ellen DeGeneres Show, which officially ends on May 26, saw the biggest stars in Hollywood sit down with the 64-year-old comedian for an interview, only for them to be LITERALLY scared off. Ellen typically enlisted the help of costumed people hidden in the studio to jump out and frighten her celebrity guests. Some stars, such as Sarah Paulson, were subject to these hilarious pranks repeatedly. We rounded up six of the best celebrity scares on The Ellen DeGeneres Show from the past two decades. Watch the epic moments below!

Taylor Swift was scared one of the first times she appeared on The Ellen DeGeneres Show. The incident occurred in November 2009, when Taylor, dressed in a white shirt and black pants, was sent to a fake dressing room with hidden cameras. The “Style” singer was told to go into the bathroom, where she thought there were photos of her and Ellen. But instead, Ellen was there hiding behind the door. Taylor walked in as Ellen jumped out and scared her, causing the Grammy Award winner to fall to the floor in hysterics. Both ladies laughed off the moment, and Ellen even fell to the floor as well. After they hugged, Ellen told Taylor, “oh my god, that was the best one yet.” The comedian scared the Miss Americana star other times throughout her appearances, but the bathroom incident remains a classic.

Sterling K. Brown was a victim of Ellen’s prank during his appearance in May 2018. The This Is Us star and his pal Brian Tyree Henry played “The Movie Game” hosted by Ellen. After over a minute into the game, a man wearing hospital scrubs busted out of the table towards Sterling, who screamed and jumped out of his chair. He went running into the opposite direction, as Brian, who was in on the joke, cheered and laughed with Ellen. Sterling eventually returned to the table and jokingly threw cardboard at the prankster, as they all watched back the footage and laughed.

Poor Sarah Paulson. The American Horror Story actress has probably been scared on The Ellen DeGeneres Show more times than anyone. But Ellen’s best prank on Sarah was in January 2019, when they played a game of Heads Up. After a few rounds, a man dressed like a black ninja fell from the air and made Sarah go wild. She screamed in her chair and then got up to calm herself down, as Ellen and the whole audience laughed. Eventually, the Impeachment star sat back down and continued chatting with Ellen — only for another prankster to jump out of a box next to Sarah to scare her. This time, Sarah stayed seated in her chair and put her feet up as she nearly cried over the scare. “You guys, what’s gonna happen now?” she asked Ellen and the audience. So epic!

John Krasinski got a good scare from Ellen when he appeared on her show in February 2018. They discussed his horror film A Quiet Place and started a no-speaking contest while attempting to make each other laugh. Of course, Ellen had a major trick up her sleeve. Someone dressed as Freddy Krueger jumped out of the box and scared John, thereby allowing Ellen to win the game. “That was the worst,” Emily Blunt‘s husband said, as he sat back in his chair still in shock. “Don’t wear light-colored pants on Ellen,” he joked. John also questioned how long the prankster was hidden in the small box. “That was the worst, I’m still shaking,” he admitted.

Aubrey Plaza received the scare of her lifetime on The Ellen DeGeneres Show in June 2019. The duo played “Speak Out,” where Aubrey had to use a mouthpiece while uttering phrases to Ellen, who had to guess what she was saying. The Parks and Recreation alum struggled in the game which led to so many hilarious moments. But the greatest moment of all came from a surprise scare by a man dressed as Chucky from Aubrey’s film Child’s Play. Aubrey still had the mouthpiece on so she couldn’t scream loudly, but she did throw the card towards the Chucky character. “I hate you,” Aubrey said to Ellen, as she removed the mouthpiece and threw it to the side. She continued screaming “No!” as she pretended to throw a plant and her chair as well. “I did that for two months with Chuck,” she said. “No more Chucky!”

Dax Shepard was on the Ellen DeGeneres Show for his birthday in January 2019 and his wife Kristen Bell made a surprise appearance. Ellen kindly brought out a cake for Dax, as the couple and the comedian walked over while the audience led a sing-a-long of “Happy Birthday.” Just as Dax and Kristen stood in front of the cake, a clown blew through the delicious dessert and scared them. The stars both jumped backwards away from the clown, as Kristen screamed loudly while Dax laughed at the hilarious incident. “Get out of here you little rascal!” Dax yelled. He added, “Well that made my birthday much better. Now it’s a great birthday.”