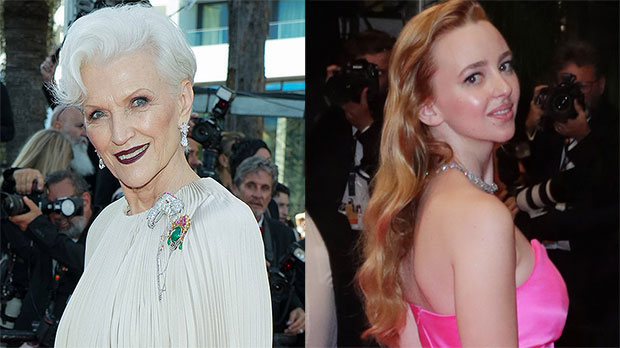 Elon Musk‘s girlfriend Natasha Bassett, 29, just scored some serious bonus points with the 50-year-old billionaire and his beloved mother, Maye Musk, 74! After going incognito for the past few months, HollywoodLife has EXCLUSIVELY learned that Natasha — who stars in Baz Luhrmann‘s upcoming Elvis biopic — brought Elon’s mother Maye as her guest to the Cannes premiere of the highly-anticipated film. According to a source, “Elon and Natasha are still going strong and over time Natasha has developed a solid bond with his mother Maye. Maye is the most important person in Elon’s world and the fact that she adores Natasha means so much to him.”

HollywoodLife was the first outlet to report the news that Elon and Natasha were dating after a photo surfaced on February 17 of Elon exiting his private jet in Los Angeles, Calif., with an — at the time — beautiful red-haired “mystery” woman. One month later, in March, Elon’s ex Grimes, 34, revealed on the cover of Vanity Fair that she welcomed a second child into the world with Elon via a surrogate. After leading fans to speculate that she was still with the Tesla founder, Grimes clarified the situation that same day when she said that they split. Since then, Elon and Natasha have been on the DL, giving little clues that they were together — until now. On May 26, Maye shared a photo on her Instagram story with Natasha when the two arrived for the premiere. And Maye showed her some love with emoji hearts next to her tag. The two ladies did not walk the carpet together and were careful to not be seen in the same shot at the event.

According to our source, “Natasha scored huge brownie points this week when she asked Maye to go with her to Cannes, the film she is starring in. Elon had work obligations and could not go. Plus, Elon and Natasha are still trying to keep it on the DL. Maye is a huge fan of Elvis and thought that it was so amazing that Natasha has a role in the film.” As HollywoodLife also EXCLUSIVELY reported, Elon introduced Natasha to his beloved mom around the same time that they were photographed deboarding his jet in L.A. At the time, our source told us, “One of the things that Elon admires most about Natasha is how close she is to her family because he is extremely close to his. In fact, he has already introduced her to his mom and they hit it off.”

And it seems that the ladies continued to hit it off on their overseas trip to Cannes, as the insider said, “They both attended the premiere and had a wonderful time. They spent additional time together while in Cannes and have gotten closer than ever. Maye loved the film, and she was extremely impressed by how talented Natasha is. Ultimately, she was very touched by Natasha asking her to join her at this event because she knows how important it was to Natasha and she could have asked anyone to come.”

Elon Musk Confirms He Would Reverse Trump’s Twitter Ban: ‘I Do Not Think It Was Correct’

So what does Elon think of his mom getting close to his lady love? The source told HollywoodLife that the Space X founder — who recently bought Twitter — is fully on board with his mother getting close to Natasha. “Elon thinks that it is great that his two favorite women in the world, his mom and Natasha, got to experience this together. It really means a lot to him that Natasha took her along. HollywoodLife reached out to reps for Elon and Natasha, who offered no comment so far.