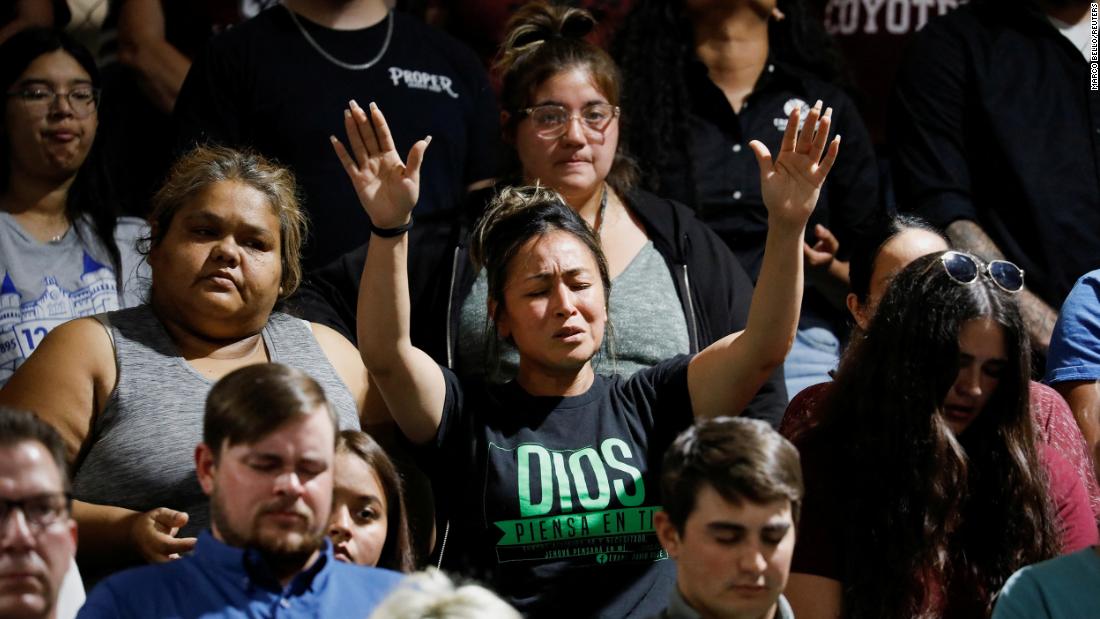 The bodies of nine victims were released to funeral homes Wednesday evening, Judge Lalo Diaz told CNN. The remaining 12 bodies would be released either late Wednesday or Thursday, he said.

The 18-year-old shooter, identified as Salvador Ramos, remained inside Robb Elementary school in Uvalde, Texas, for up to an hour Tuesday after he entered the building with an AR-15-style rifle, barricaded himself inside a classroom and opened fire on the students and teachers inside, officials say. He was later shot and killed by law enforcement.

One parent who was a first responder on the scene, found out his daughter, Amerie Jo Garza, had been killed while he was giving medical aid to a student who had just emerged from the school.

The student, who was hysterical and covered in blood, told Angel Garza she had seen her best friend be killed. Then, she said her friend’s name was Amerie, he told CNN, fighting back tears as he held a framed photo of the 10-year-old receiving an honor roll award.

Amerie had just gotten a cell phone for her birthday two weeks ago. As the shooting unfolded, Garza said, his daughter was trying to call 911 for help.

“She just died trying to save her classmates. She just wanted to save everyone,” Garza said.

The Uvalde community joins a growing list of Americans devastated by gun violence, particularly school shootings. The massacre at Robb Elementary is at least the 30th school shooting at a K-12 school this year, according to a CNN tally. It is also the deadliest school shooting since 26 people were killed at Sandy Hook Elementary in 2012.

Support for the families of Robb Elementary and the surrounding community has flooded in as they work through the dizzying shock of Tuesday’s tragedy.

At a vigil for the 21 victims Wednesday night, community members wept and hugged as “Amazing Grace” filled the room.

Catherine Alvarez, 20, stood in line with her mother for hours even though she is unable to donate blood due to health reasons.

“This is something that we don’t take lightly,” Alvarez told CNN. “In this community we are all family and if one is grieving, we are all grieving,” she said.

The tragedy in Uvalde has elicited outrage from families of gun violence victims and officials who say a lack of intervention will only lead to more attacks.

“There’s people there sitting in a same spot, in a different community, that I was. Today, tomorrow, they’ll be at a funeral home, sadly, planning a burial,” Neil Heslin, whose son Jesse died in the Sandy Hook shooting, told CNN.

Families identify loved ones they lost

As funeral arrangements begin, a grief-stricken nation is learning the identities of several victims, including teachers Eva Mireles and Irma Garcia, who had been co-teaching together for five years.
Garcia, a wife and mother to four children, was “sweet, kind, loving,” according to a GoFundMe campaign set up to raise funds for funeral expenses and family needs.

“She sacrificed herself protecting the kids in her classroom. She was a hero. She was loved by many and will truly be missed,” the campaign said.

Mireles had been teaching for 17 years and “was a vivacious soul” who “spread laughter and joy everywhere she went,” relative Amber Ybarra told CNN.

“She made you feel like she was only teaching your child,” said Erica Torres, whose son Stanley was in her third and fourth grade classes. “Like there’s no other students but him. She made you feel so good.”

José Flores Jr., 10, was also killed in the shooting, his father José Flores Sr. told CNN. His mother said he was her “little shadow.” José Jr. was bursting with energy and loved to play baseball and video games, his father said.

Lexi Rubio, 10, had made the All-A honor roll and received a good citizen award just hours before she was shot and killed, her parents Felix and Kimberly Rubio told CNN.

“We told her we loved her and would pick her up after school. We had no idea this was goodbye,” Kimberly Rubio wrote in a post on Facebook.
Nine-year-old Eliana “Ellie” Garcia, was among those killed, family members confirmed to CNN affiliate KHOU. Her grandparents, Rogelio Lugo and Nelda Lugo, told the LA Times that she loved the movie “Encanto”, cheerleading and basketball. She dreamed of becoming a teacher, they said.
Third-grader Annabell Guadalupe Rodriguez, 10, and her cousin both died in the same classroom Tuesday, her family members confirmed to CNN affiliate KHOU. The cousin’s name has not been released.

Shooter sent messages about his intentions before the attack

Before he began his rampage, Ramos allegedly messaged a girl who lives in Germany about his intentions.

He complained that his grandmother was “on the phone with AT&T abojt (sic) my phone,” according to screenshots reviewed by CNN and an interview with the 15-year-old girl, whose mother gave permission for her to be interviewed.

“It’s annoying,” he texted her.

The girl told CNN she began chatting with Ramos on a social media app on May 9. Ramos sent her selfie videos and talked about a plan to go visit her in Europe, videos and text messages show.

The shooter shot his 66-year-old grandmother in the face before driving to the Robb Elementary School, where he crashed his car in a nearby ditch, authorities say.

His grandmother was in serious condition as of Wednesday, officials said.

Once the shooter arrived at the school, he encountered a school district police officer, dropped a bag of ammunition, and entered the school, Sgt. Erick Estrada of the Texas Department of Public Safety said. Ramos then barricaded himself inside two adjoining classrooms and opened fire, DPS Lt. Chris Olivarez said.

The gunman was in the school between 40 to 60 minutes before law enforcement forcibly entered and killed him, Texas DPS director Steven McCraw said at a news conference Wednesday.

Rep. Tony Gonzales, whose district includes Uvalde, told CNN he was briefed that Ramos was in a standoff with law enforcement for about 30 minutes after firing on students and teachers.

Ramos was a local high school dropout with no criminal history and no known mental health history, officials said. He had just turned 18 and legally bought two AR-15-style rifles and ammunition for his birthday. His grandfather said Wednesday he didn’t know Ramos had guns.

“If I had known I would have reported him,” Rolando Reyes said.

As the toll of America’s mass shootings grows, many survivors and victims’ families have formed a network to help others deal with the trauma.

“We hold their hands and their broken hearts as long as we can and continue the road with them for the rest of their lives if they want us there,” said Sandy Phillips, who lost her daughter nearly 10 years ago during a mass shooting at a movie theater in Aurora, Colorado.

“We always recommend that initially they get the trauma therapy that they’re going to need to treat the PTSD symptoms that they will have from this,” she told CNN. Her son was one of the first responders who went to Uvalde to help. He was also there the day his sister died.

As Uvalde families are overwhelmed with grief, city officials in Houston are facing calls to cancel the National Rifle Association’s annual meeting, which is being hosted in the city this weekend. Houston Mayor Sylvester Turner said the city cannot cancel its agreement with the NRA, citing contractual obligations.

However, the mayor urged legislators and officials not to participate in the event and said the NRA should postpone it.

“Certainly they don’t have to come and I think it would be respectful for the families who are planning funerals for their children for them not to come,” said Turner. “You should not come.”

Texas Gov. Greg Abbott, who is scheduled to speak at the NRA conference, argued during a news conference Wednesday that tougher gun laws aren’t a “real solution” and said state officials are discussing how to keep schools safe and address people with mental health challenges.

At the news conference, the governor and other officials were confronted by Democratic gubernatorial nominee Beto O’Rourke.

“This is on you, until you choose to do something different,” O’Rourke said to Abbott, calling the shooting in Uvalde predictable. “This will continue to happen. Somebody needs to stand up for the children of this state or they will continue to be killed, just like they were killed in Uvalde yesterday,” he added.

National officials have also spoken out about Tuesday’s shooting, including US Centers for Disease Control and Prevention Director Dr. Rochelle Walensky, who said in a statement that the tragedy is “a reminder that gun violence is a serious public health threat that must be addressed.”

State officials beyond Texas are vowing to act in the wake of the Robb Elementary attack. California Gov. Gavin Newsom announced Wednesday that state lawmakers plan to fast-track several new gun control bills. Once signed into law, the bills would go into effect at the end of next month, he said, instead of waiting until the new year.

In New York, which was shaken by a mass shooting in Buffalo less than two weeks ago, Gov. Kathy Hochul said she wants to raise the minimum age to purchase a gun in the state from 18 to 21.

“Am I supposed to just leave all the flags at half-mast? They’re still at half-mast from Buffalo. No, I don’t want to,” Hochul said during a news conference Wednesday. “So, we harness this anger, we talk about what we can do. We work with our legislators.”