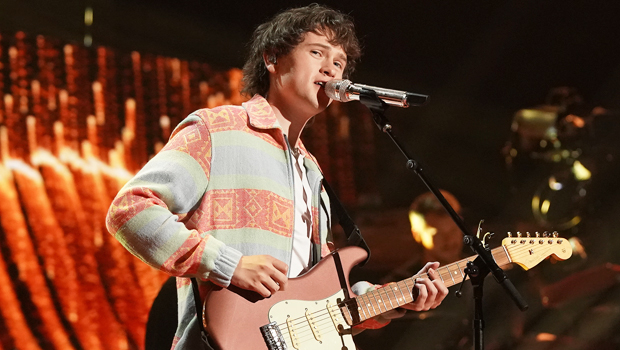 Fritz Hager was one of the standout artists of American Idol season 20, and he made it all the way to the top 5. After witnessing Fritz’s talent on Idol, it’s clear this is just the beginning for the Texas singer. Now that the show has come to an end, Fritz wants to keep the “momentum” going and kickstart the next chapter of his music career.

HollywoodLife spoke EXCLUSIVELY with Fritz about new music in the future, and he promised that there’s some “definitely coming” soon. He also talked about his incredible fans, his future and inevitable collaboration with Leah Marlene, and those “funny” dating rumors. Read our Q&A below:

Now that the season is over, how are you feeling about everything that’s happened over the last few months?
Fritz Hager: It’s crazy. Right now, it’s really just about keeping this momentum going. I feel like these next couple of months can be really important for my career moving forward. So while I am home and resting, I’m also doing shows while I’m here and trying to sort of stay in the business that Idol had and stay locked into growing my career.

You released a new single called “Hearts Align.” Do you have new music coming out? An album? What are your plans?
Fritz Hager: I’m going to be playing live more. I’m going to be in the studio a lot more. All this is happening. People can definitely expect new music. I hope I can put out an album. I’ve always wanted to do that and put out a whole body of work. It’s hard to tell exactly what’s going to happen, but 100 percent new music is definitely coming.

Are you always someone who’s writing down new material?
Fritz Hager: I was writing throughout all of my Idol experience. I’ve written several songs in that hotel room. I really can’t stop because writing is my outlet. Idol is very high stress, so that was sort of my coping mechanism for a lot of the stress that came my way. I’m always writing. I had the chance to meet up with some cool people while I was in LA. There’s cool stuff on the line for sure.

Do you think you’ll move to Los Angeles or Nashville? Are you just playing it by ear?
Fritz Hager: I’m sort of playing it by ear. I know I’m going to leave Texas. I do know that. LA and Nashville, it’s like a coin flip almost. It really just comes down to what opportunities come my way. That choice has been looming over my head for the entire time I was in LA. LA or Nashville, that’s a big one. I think that, regardless, I’ll be moving back and forth between the two cities. I’m just excited to see what happens.

Throughout Idol, you developed a really incredible fan base. How do you feel about having that support from people who just genuinely love your music and have rallied behind you?
Fritz Hager: It blows my mind every time. Obviously, votes kept me in the competition for a really, really long time. It blew my mind every single week. And then winning the encore performance on Kelly and Ryan was another moment where I’m just like, oh my gosh. I was writing and playing music for a long time and not a lot of people cared, so it really touches me that so many people are rallying behind me and supporting me, and looking forward to what comes next.

During the finale, you got the chance to perform with James Arthur. What was that like getting to perform with someone you look up to so much?
Fritz Hager: That was amazing. James Arthur is such a cool guy. We had an opportunity to chat as well. What I appreciated the most… obviously, playing with him was amazing, but being able to talk with him about his experience on X Factor and how he sort of kept that momentum and built on it. He’s one of the greatest successes of that show, so getting able to be able to pick his brain about what happened to him after the show and how he was able to maintain that momentum and sort of snowball it into the career he has now was amazing. I’m really grateful for that. Idol’s just amazing that you meet a bunch of people that you would never meet otherwise, so I was just really grateful to be able to share the stage with him and get to chat with him.

The season 20 group was honestly one of the most tight-knit groups I’ve seen on Idol in a long time. How did it feel to have that support system throughout the competition?
Fritz Hager: Idol is incredibly stressful all the time. We’re all away from our families. A lot of us have never been to LA before. It was a very new, foreign experience for all of us. But you’re right, we grew super close, like all the top 24. We were all close from that point on because we had just been in it together for a really long time. It’s almost like trauma bonding. We’re all going through the exact same experience, and there’s not a lot of people out there that can really relate to that and really understand what it’s like. I’m super, super grateful for that support. We really held each other up throughout the whole process.

I just spoke to Leah, and she stressed that there is going to be more Leah and Fritz’s content very soon. I wanted you to weigh in on that.
Fritz Hager: She’s 100 percent right. If we didn’t do something together, it would be probably the biggest misstep of our career. Obviously, Leah’s great. She’s an amazing musician, an amazing songwriter. There’s definitely going to be plenty of Leah and Fritz’s content for the world to see.

I’m a big sucker for duets, so I loved you and Leah’s “Locked Out of Heaven” duet. I need you guys in the studio writing a song and releasing it to the world.
Fritz Hager: We’ve been talking about that ever since Hollywood Week. With the show happening, we were pretty limited in what we could do. But now that the show’s over, I’m really excited to see what comes from that collaboration. There’s going to be plenty of it.

I think some fans wanted you and Leah to follow couples like Gabby and Cade. What was your reaction when you saw those dating rumors going around?
Fritz Hager: Honestly, for me and Leah, they’re just so funny. It’s weird a little bit just because it was our first time being in the spotlight. It kind of cracks us up because it’s just so not that. But she’s great. She’s like my best friend. I think that I think people do want that. Every time either of us goes live or we post something on Instagram, there are always people who ask the dating question. But we’re just really good friends.

Looking back on Idol, is there something you learned about yourself or something that’s impacted you?
Fritz Hager: It’s hard to really quantify that just because I’ve changed so much since my first audition, just as a person. I think probably the biggest thing is just the confidence and knowing that this is what I’m supposed to do. There are people out there that are supporting me and want me to make music. I really view the music industry as a service to people. That’s probably the biggest thing, and there’s a confidence that comes with that, knowing that there are people out there that are supporting you. That’s probably the biggest change to me, personally, but there’s been so much good advice throughout the season. One that always stuck with me was the very first piece of advice Katy [Perry] gave me during my first audition. People need to know who I am as an artist from the first note that comes out of my mouth. That is applicable outside of the show. I’m really, really excited to take all I’ve learned from Idol and now apply it to the real world and the music industry, and see what comes of it.

Share
Facebook
Twitter
Pinterest
WhatsApp
Previous articlePolice commander made ‘wrong decision’ not to breach classroom doors during elementary school shooting, official says
Next articleInformation security gets personal: How to protect yourself and your stuff