If You Notice This in a Pool, Don’t Go In, CDC Warns in New Report 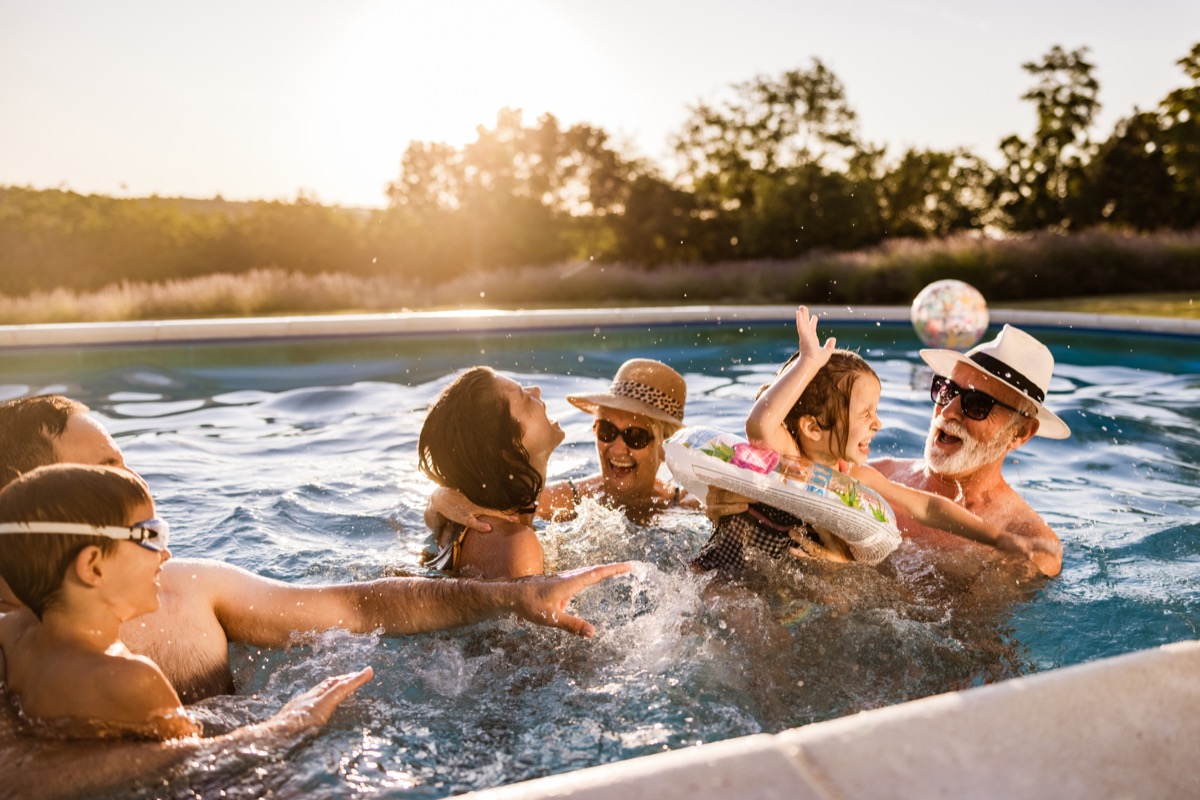 As summer rolls in and the weather heats up, many of us are looking to forward to indulging in our favorite pastime—going to the pool. According to the U.S. Bureau of Labor Statistics (BLS), swimming is the fifth-most popular activity in the U.S. That’s hardly surprising, as there are 10.4 million residential and 309,000 public swimming pools in the country, Insider reports. But while a pool may seem safer than the ocean and the unknown creatures that roam it, swimming pools can also be hiding potential dangers of their own. In fact, the Centers for Disease Control and Prevention (CDC) just released a new report, highlighting one clear problem in pools. Read on to find out what you should look out for before diving in.

READ THIS NEXT: If You Notice This in a Hot Tub, Don’t Go In, CDC Says.

While swimming in a pool might seem like a fun way to relax in the summer, the CDC warns that are several potential risks involved with this activity. This includes the potential for drowning, swimming-related illnesses, and pool chemical-associated injuries. According to the CDC, drowning is the leading cause of unintentional injury death among children under 4 years old, and more than 60 percent of fatal drownings for this age group occur in swimming pools.ae0fcc31ae342fd3a1346ebb1f342fcb

But while you are surely aware of drowning risks, a new report highlights dangers that you may not even be thinking about.

READ THIS NEXT: If You See This, Get Out of the Pool Immediately, Experts Warn.

The CDC issued a new report on May 20, chronicling a recent bacteria outbreak from a swimming community pool. According to the report, the Pennsylvania Department of Health (PADOH) received multiple complaints of gastrointestinal illness on June 7, 2021, from patrons who had visited and swam at a community pool on May 31 that year. The agency identified 15 cases of E. coli infection among children ages 4 to 14, with nine of the cases confirmed and six probable cases.

“These are pathogens that can cause pretty significant gastrointestinal distress in all ages, but particularly in children,” Molly Nace, an epidemiology research associate at the Pennsylvania Department of Health in Greensburg, told HealthDay. “Some of the children who tested positive for E. coli also tested positive for C. difficile.”

According to Nace, all of the infected children got sick after swallowing the contaminated pool water. She said bacteria like E. coli and C. difficile usually make their way into pool water because someone swims while having diarrhea. “Persons experiencing diarrhea should abstain from swimming,” the CDC advised in its report.

The agency also reported that the infected children started experiencing symptoms two to four days after exposure to the bacteria. Symptoms of E. coli infection can include severe stomach cramps, diarrhea, vomiting, and fever. Some infections can even be severe of life-threatening. In the Pennsylvania pool case, 13 patients sought medical evaluation and six were hospitalized.

The CDC report says that initial findings suggested there was an “unusual association” between being in a chlorinated swimming pool and infections caused by two bacteria that are normally killed by chlorine. But upon further review, the agency said a “pool inspection revealed an automatic chlorinator malfunction,” which allowed the bacteria to thrive.

“Record-keeping was inconsistent with local requirements, and the few available records demonstrated at least one instance of no detectable chlorine,” the CDC explained. “The pool reopened following chlorinator repair, after which no additional cases were identified.”

According to the experts at San Diego Pools, chlorine sanitizes and kills bacteria, oxidizes to help overall water quality and clarity, kills algae and prevents it from growing or expanding, and stabilizes pool water. Without this, a pool could contain “all sorts of unseen dangers.”

“Statistically, a pool without chlorine is more likely to make you sick because of the possibility of being exposed to the things not contained or killed by chlorine. Remember, your skin is porous, so microscopic impurities can pass through,” San Diego Pools explains on its website. “A pool sans chlorine is akin to a big puddle of murky water. And because of unrestrained algae growth, the pool wouldn’t be all that visually appealing. To be fair, you could swim in a pool without chlorine and probably be just fine, but the health and safety risks would be much greater.”

Of course, not all pools without chlorine will have enough algae growth to notice. The CDC advises using testing strips, which you should have on hand for a pool at home. The bottom line is, if you aren’t sure a pool is properly chlorinated, it’s not worth taking the risk.

READ THIS NEXT: If You See This at the Beach, Don’t Go in the Water, Experts Warn.