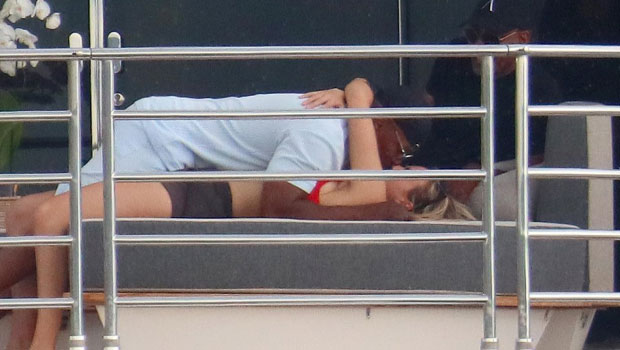 Love is in the air … and on the boat … and in the water for Jamie Foxx! The 54-year-old actor was spotted kissing a blonde mystery woman on a private yacht on May 23. The pair were having fun in the sun off the coast of Cannes, France as they packed on the PDA on and off the yacht.

In some of the paparazzi photos, the couple could be seen riding a jet ski. Jamie donned a matching white tee and shorts set while his lady wore black short shorts and a red bikini top. She held tight to the Project Power actor as he cruised around the yacht. There was a giant unicorn floaty available for use, but the pair stuck with the motorized option.

Meanwhile, on the boat, the pair couldn’t get enough of each other. They were seen cozying up standing on the deck as Jamie sipped a red drink. The couple steamed things up at one point when the blonde-haired beauty was lying on a bench with Jamie on top of her. They cuddled, kissed, and sparks seemed to fly.

Jamie Foxx’s Family: See Photos Of The Oscar Winner With His Daughters

Jamie was quite active on his Instagram page while soaking up the French sun, but did not give any details about who his date was. Instead, he posted a video with daughter Corinne Foxx, 28, to promote their show, Beat Shazam. They told viewers Season 5 of the series was premiering later that night on Fox and encouraged folks to view it. “First of all we just wanna thank all the fans and everybody it takes to Beat Shazam … five seasons! Five seasons!” Jamie exclaimed. “And man, who would have thought we would be in our fifth season doing our thing and listen it is amazing, the show is incredible.”

Jamie also shared several videos on his Instagram story that showed off the gorgeous views from his yacht and the seafood appetizers he was served while aboard. In addition to promoting his show, he gave RD Whittington‘s Discovery+ game show Million Dollar Wheels some love. “Yo, I’m here with RD Whittington baby. Millionaire Wheels is nominated for Critics’ Choice Award … Best Business Show … and how do you celebrate? Like this!” Jamie said, once again showing off the picturesque views.

For now, Jamie’s possible new girlfriend remains a mystery. Jamie is notorious for keeping his relationships under wraps, as he dated actress Katie Holmes for years without ever publicly commenting on the romance.