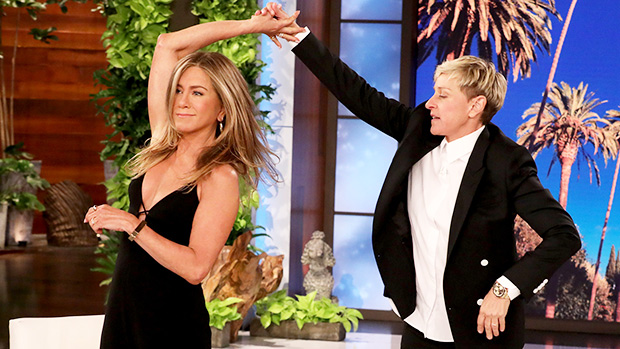 Jennifer Aniston rarely speaks about her former marriage to Brad Pitt, but she made an exception on the final episode of The Ellen DeGeneres Show. The 53-year-old star appeared on her good pal Ellen DeGeneres‘s talk show on May 26, and after the pair adorably slowed danced to Donna Summer‘s “Last Dance,” they started chatting. Ellen, 64, sought advice on how to handle the end of her talk show, asking Jennifer what she did once her beloved sitcom Friends ended its 10-season run in 2004.

“Well, I got a divorce and went into therapy,” Jennifer said with a laugh. She was referencing her split from Brad, 58, in January 2005, following four and a half years of marriage. “And then I did a movie called The Break-Up” Jennifer added, mentioning the 2006 rom-com that she starred in opposite another one of her exes, Vince Vaughn, 52.

“I just kind of leaned into the end,” The Morning Show star added. “I was like, ‘You know what guys, let’s just make this a completely new chapter. Let’s just end everything, and start new.’ ” Ellen noted that Jennifer’s attitude to hit reset “worked out” for the successful actress. “It worked great,” Jennifer said.

As everyone knows, Jennifer and Brad’s split was an ugly one. It was rumored that Brad cheated with his Mr. and Mrs. Smith co-star Angelina Jolie, who he’s now battling with over custody of their six kids following their divorce. Jennifer went on to marry Justin Theroux, and although things didn’t work out, they’re still extremely friendly. More unexpected, perhaps, is that Jennifer and Brad are also on good terms today. The famous exes even reunited backstage at the 2020 SAG Awards, followed by a virtual table read for Fast Times at Ridgemont High later that year.

“It was absolutely fun,” Jennifer told Howard Stern of the virtual reading in June 2021. “Brad and I are buddies, we’re friends.” She also said that she and the Fight Club actor “speak” and there’s “no oddness at all” between them. At the time of the live reading, a source told HollywoodLife that Jen and Brad are “great friends” and were excited to be working together on the project.