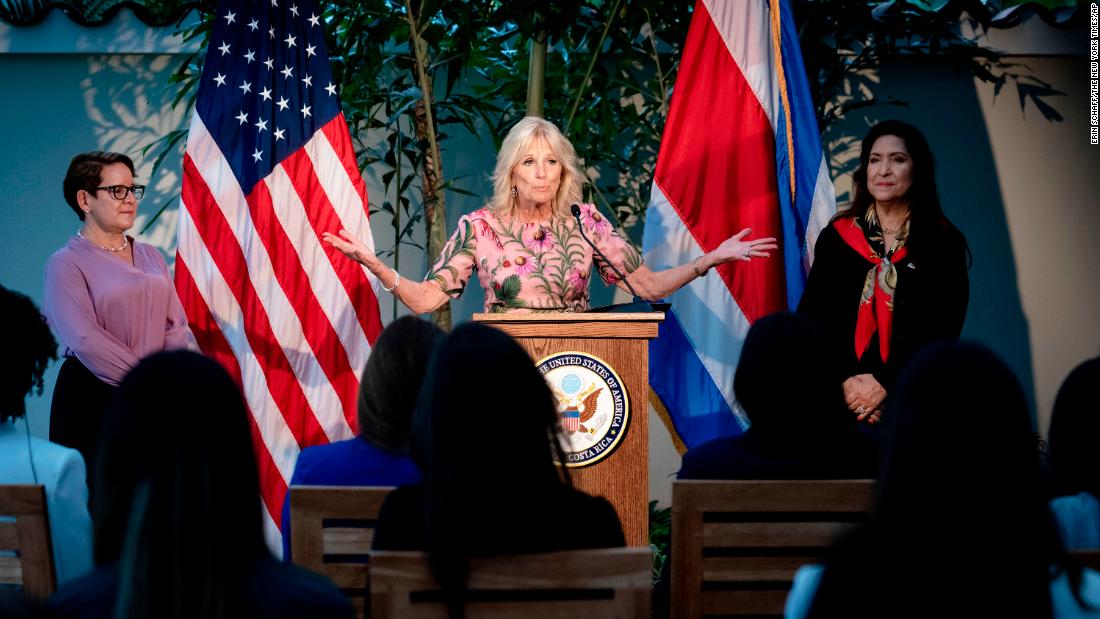 “Alone, you can only do so much. Any one of us can only do so much,” said Biden in remarks at the Ecuadorean presidential palace on Thursday. “That’s what I’d like to talk to you about today: How when we work together, we can make our nations and our world stronger.”

Biden has — in the three capital cities of Ecuador, Panama and Costa Rica — made remarks on a similar theme, tackling issues related to democracy, growth and political freedom. Her mission has been to shore-up relations with allies in a region rife with corruption and immigration issues, a topic her husband’s administration has found controversial back home.

“[Biden] understands the fine line she has to walk between serving as a goodwill emissary from the US promoting American values, and being a political actor herself,” said Kate Andersen Brower, CNN contributor and author of “First Women: The Grace and Power of America’s Modern First Ladies.”

Throughout her travels this week, the first lady has dotted her stops with gifts of funding, announcements of aid and promises of support from America, combining cheery partnership sweet spots with the warning that — in a world of recent, ongoing and perhaps future challenges — it is better to have the US in your corner than not.

“Injustice and corruption, poverty and pollution, disease and despair. They aren’t contained by any borders,” Biden said in Ecuador, standing at a podium just feet from that country’s president, Guillermo Lasso, having met privately with him for close to an hour earlier in the day.

“If we learned anything from the Covid-19 pandemic, from these last few years of sickness and sorrow, it’s how one deadly virus can move through the world. How hunger and violence are woven together. How a war in Europe can ripple through stock markets and supermarkets. And here, how the loss of trees in your Amazon can take a piece of the future from all of us.”

Quiet diplomacy behind the scenes

Yet what the goodwill photo ops did not reveal were new conversations on the margins between State Department officials and the Ecuadorean government, an opportunity for needed, behind-the-scenes engagement, which the first lady’s trip provided.

There are now ongoing negotiations for a bilateral agreement with Ecuador on migration and protection with countries throughout the region, a US official involved in the discussions told CNN.

“Ecuador hosts large numbers of Venezuelan migrants and refugees,” said the official. “We also discussed the importance of protection for this vulnerable group.”

According to an official at the Department of Homeland Security, “More than 6 million Venezuelan refugees and migrants have fled their homes, making this the second-largest external displacement crisis in the world.”

Seventeen countries in Latin America and the Caribbean host approximately 80% of this Venezuelan diaspora, including large numbers in Ecuador. Costa Rica, a country of only 5 million people, is hosting approximately 150,000 Nicaraguan migrants, fleeing another country with a tenuous political climate, according to the official.

“The first lady is the most visible woman in American politics,” said Brower. “By showing interest in another region and using the unique soft power of her position to promote American values and democracy she can strengthen and even heal relationships.”

“There’s a general acceptance that a first lady has the gravitas and clout to make a trip to a region critical to the US,” said Brower.

‘Diplomacy is about relationships’

In Panama on Saturday, during a visit to an HIV/AIDS shelter home, funded by the US’s PEPFAR program, the first lady announced an additional $80.9 million for PEPFAR in the region, including $12.2 million for Panama, which will be dedicated to expanding HIV/AIDS services and treatment, according to Biden’s spokesman Michael LaRosa.

“I see this great community. I see how hard you’re all working and, maybe with the additional funding that we will be announcing today, I’m hoping that it makes a difference for you,” said Biden, who participated in a roundtable discussion at the shelter, listening to the needs of a community which has received little monetary support for HIV/AIDS from its own country’s government, according to statistics provided by the East Wing.

The engagement of the PEPFAR program was done well before Biden’s visit, said a White House official, though the announcement at the center was seen as a surprise.

“Bottom line is that none of this travel is typically done in a vacuum – it’s part of a strategic plan – or should be,” said Anita McBride, director of the First Ladies Initiative at American University and Laura Bush’s former chief of staff.

At her third and final stop on the tour, Costa Rica, Biden on Saturday evening had dinner at the US ambassador’s residence with Costa Rica’s new president, Rodrigo Chaves, who has been in office for less than two weeks after a run-off election and was recently embroiled in a sexual harassment scandal from his years at the World Bank, and his wife, first lady Signe Zeicate.

Zeicate met Biden’s plane at the airport that afternoon, welcoming her American counterpart with a hug and joining her for events Saturday and Sunday.

“Diplomacy is about relationships. (Biden) builds a rapport with the first spouses and it matters, it helps to break the ice and establish some familiarity with each other, and in private moments share their husband’s positions. They build some greater mutual understanding, hopefully,” said McBride.

At San José’s National Children’s Hospital on Sunday, Zeicate seated in the front row of a small room where Biden was speaking. The first lady, in remarks to assembled media and local government officials, dropped the news that country’s public health authority had recently entered a memorandum of understanding with the University of Pennsylvania and the Children’s Hospital of Philadelphia, which, according to LaRosa, will boost research availability and, “help Costa Rican children access a lifesaving cancer treatment.”

“No country can defeat cancer alone,” said Biden. “It takes all of us working together.”

Biden was introduced by US Ambassador to Costa Rica Cynthia Telles.

“It’s important to note that the first lady’s visit to Costa Rica was the catalyst for finalizing the agreement,” said Telles.