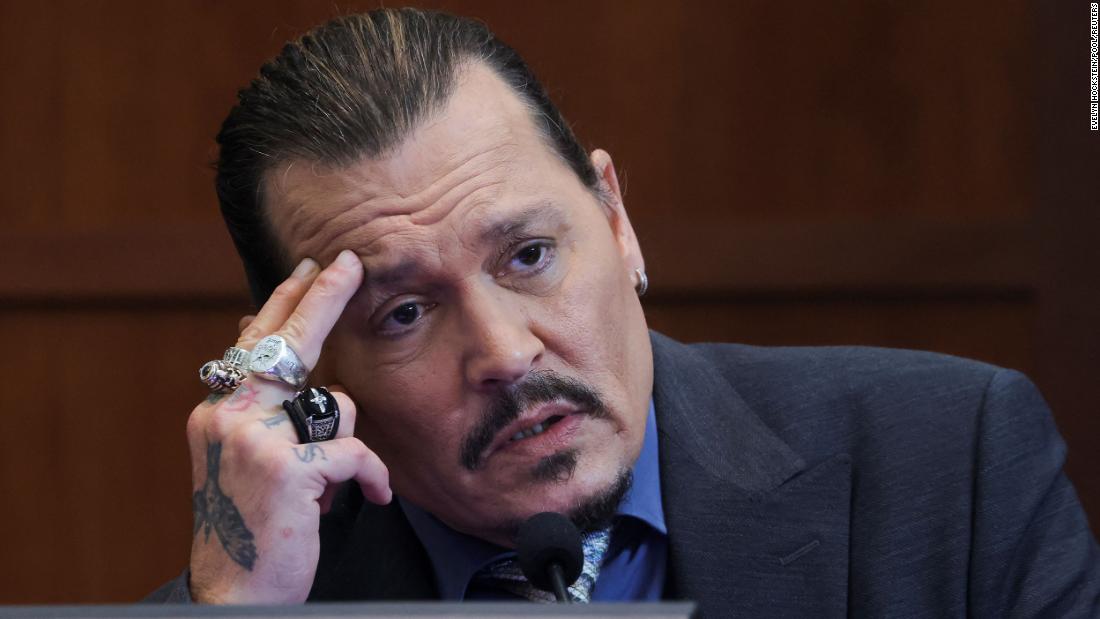 Heard previously testified that Depp hit her, and any time she used force, it was in reaction to him. Depp on Wednesday said Heard’s accusations of physical and sexual violence had “gotten out of control.”

“I have never in my life committed sexual battery, physical abuse. All these outlandish, outrageous stories of me committing these things and living with it for six years and waiting to be able to bring the truth out,” Depp testified. “So this is not easy for any of us. I know that. No matter what happens, I did get here and I did tell the truth. And I have spoken up for what I’ve been carrying on my back reluctantly for six years.”

Depp is suing Heard for $50 million, claiming a 2018 Washington Post op-ed she penned where she called herself “a public figure representing domestic abuse” defamed the actor and caused him to lose work in Hollywood. Heard has countersued for $100 million for defamation over statements made by an attorney for Depp who called her claims of abuse a “hoax.”

On Wednesday, Depp was shown a photo of himself with a black eye while he and Heard were on the Orient Express for their honeymoon and asked how he got the injury.

When Heard took the stand earlier this month, she shared her perspective of multiple alleged violent incidents with Depp. She testified that Depp took about 8-10 MDMA pills around the time of a March 2015 incident in Australia that left Depp with a severely injured finger.

Depp said consuming that many pills would not be possible for him during testimony Wednesday.

“Because I’d be dead. Pretty sure I’d be dead,” Depp testified. “I think one would die. Probably rather quickly.”

Heard testified she was not aware Depp had injured his finger until several hours later. Depp testified that the tip of his finger was severed after Heard threw a glass vodka bottle at him.

A text message from Depp to his physician at the time read, “I cut the top of my middle finger off … What should I do!??” Depp testified that when he was later examined by the doctor at the home where he was staying, he told the doctor what happened.

“When you saw the damage in the house and the blood everywhere and obviously there was serious damage everywhere, there would be no point in lying to the man. He’d been through it with me and Ms. Heard before,” Depp testified. “I told him that she had thrown a bottle of vodka and smashed and cut my finger off. The tip of my finger. A good chunk. I miss it.”

An orthopedic surgeon who specializes in hand surgery, who was hired by Heard’s team as an expert witness, testified on Monday that the injuries Depp sustained to his finger were not consistent with his allegation that Heard slammed his hand with a glass vodka bottle, something Depp disputed on the stand Wednesday.

“All that is the exploded first bottle that went past my head,” Depp testified, pointing to a photo of the scene. “And the second bottle hit right up here where my hand was resting on the marble bar.”

In one August 2016 text message to his former agent, Christian Carino, Depp wrote Heard was “begging for total global humiliation … She’s gonna get it,” adding “I can only hope that karma kicks in and takes the gift of breath from her …”

Depp testified about why he sent those texts.

“When you’re accused of horrific acts and things that you have not done it’s actually some very ugly things that are going out there into the world about you on a non-stop basis by Ms. Heard and her team, you have a tendency, as humans, to get very, very irate and angry,” Depp testified. “Not to the point where you go out and hurt someone, not to the point where you even assault a cabinet, but you do get irate, you do wonder why this person is doing this to me.”

Model Kate Moss took the stand virtually from England to testify earlier Wednesday as a witness for Depp, telling the jury he never pushed her down stairs.

Moss, who testified for less than three minutes, said she had a romantic relationship with Depp from 1994 to 1998. Depp’s team called her as a rebuttal witness in response to testimony from Heard, who said on the stand that she thought about a rumor Depp had pushed Moss when she and her sister Whitney Heard Henriquez were in an altercation with Depp near a set of stairs.

“He swung at Whitney, and I’d heard a rumor, a vague rumor, about that,” Heard testified on May 17.

On Wednesday, Moss testified under oath that the rumor was untrue — that the then-couple went to Jamaica during their relationship and that at one point on the trip, there was a rainstorm and Moss fell down a set of stairs and injured her back.

“We were leaving the room and Johnny left the room before I did and there had been a rainstorm and as I left the room I slipped down the stairs and I hurt my back,” Moss said. “I screamed because I didn’t know what happened to me and I was in pain and he came running back to help me and carried me to my room and got me medical attention.”

Depp’s attorney asked Moss if Depp had ever pushed her down the stairs during the course of their relationship.

“No. He never pushed me, kicked me or threw me down any stairs,” Moss testified.

Moss was not cross examined by Heard’s legal team.

When Depp later took the stand, he was asked about his recollection of the incident with Moss.

“I remember looking and seeing Kate coming out the door. And there were three little wooden stairs and she slipped, her legs went up and she landed directly on her coccyx, on her lower back. She was obviously physically in pain and she was hurt, she was crying, so I ran over and grabbed her to make sure she was alright. That’s it that’s the whole story,” Depp testified.

The jury on Wednesday also heard from Morgan Tremaine, a former employee of entertainment news website TMZ, who testified about tips the outlet received around the time Depp and Heard’s marriage was ending in 2016.

TMZ attempted to intervene in the case to block Tramaine from testifying, fearing Tremaine would reveal TMZ’s anonymous sources.

Tremaine did not reveal who the tip came from but said the news producer received the tip and deemed it credible.

“Their objective was to capture her leaving the courthouse and then she was going to sort of stop and turn towards the camera to display the bruise on the right side of her face, the alleged bruise,” he said.

Tremaine also testified that a video showing Depp slamming kitchen cabinets was sent to TMZ in August 2016 anonymously through its email tip line. He also received a tip that Heard would be arriving at Los Angeles International Airport later that day.

Tremaine said he contacted Depp’s attorneys six days ago “to help with the timeline” of events in the case, and that he had no interest in testifying.

“I stand to gain nothing from this. I’m actually putting myself kind of in the target of TMZ, a very litigious organization,” Tremaine said in response to a question from Heard’s attorney. “I’m not seeking any 15 minutes here. Though you’re welcome to speculate. I could say the same thing about taking Amber Heard as a client for you.”

Heard previously testified that she was not the one who tipped off TMZ to her court hearing and that she did not send the outlet the video of Depp slamming cabinets.

The trial has been underway for six weeks, with one week-long break in the middle. Closing arguments are expected by the end of the week.