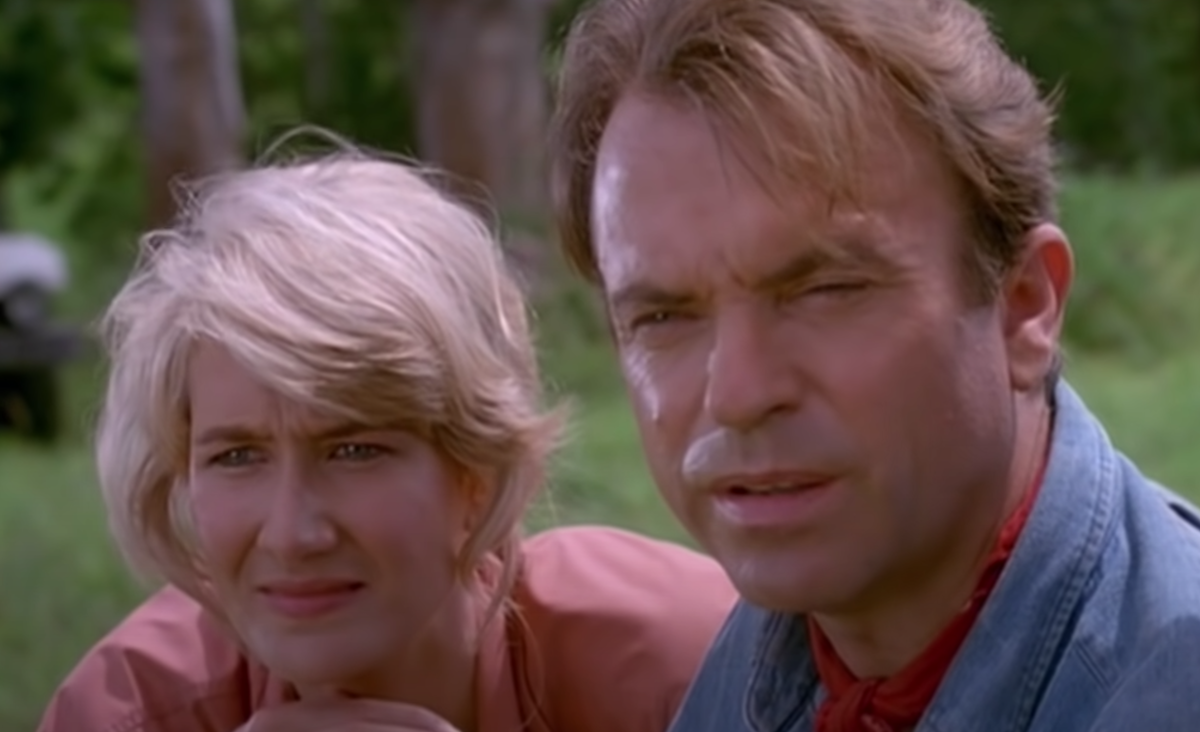 It’s common in Hollywood for heterosexual onscreen romances to consist of two actors who have a significant age gap—and it’s almost always the case that the man is much older than the woman. In fact, this type of casting is so common that it may not even register for you. In 1993, Laura Dern and Sam Neill starred in the original Jurassic Park as paleobotanist Dr. Ellie Sattler and paleontologist Dr. Alan Grant. They were in a relationship and worked together, but their age gap goes unremarked upon. The main tension as far as their romance goes is that Ellie wants to have children, and Alan does not.

But, as the actors behind the pair pointed out in a new interview, there is a 20-year age difference between them, and Dern was in her early 20s in the first movie. While neither thought anything of it at the time, they look back at it differently in 2022. Read on to find out what they had to say about the gap, 30 years later.

READ THIS NEXT: Jane Seymour Says She & This Co-Star Were Secretly “Madly in Love.”

In a new interview with The Sunday Times, Neill and Dern talked about their age difference. When Jurassic Park began filming, Dern was 23, while Neill was 43. Neill said that it was years before he even realized that there was such a large gap between them and that he found out from reading an article.ae0fcc31ae342fd3a1346ebb1f342fcb

“I am 20 years older than Laura! Which at the time was a completely appropriate age difference for a leading man and lady,” Neill told The Sunday Times (via Entertainment Weekly). “It never occurred to me until I opened a magazine and there was an article called ‘Old Geezers and Gals.’ People like Harrison Ford and Sean Connery acting with much younger people. And there I was, on the list. I thought, ‘Come on. It can’t be true.'”

Dern explained that playing characters in a relationship felt “appropriate” when they were making the film, but 30 years later, the way this sort of casting is thought about has changed.

“Well, it felt completely appropriate to fall in love with Sam Neill,” Dern told The Sunday Times. “And it was only now, when we returned in a moment of cultural awareness about the patriarchy, that I was, like, ‘Wow! We’re not the same age?'”

When the Sunday Times interview came out, Jurassic Park fans reacted online, with many claiming that they’d never noticed the gap between Dr. Sattler and Dr. Grant. To viewers who first saw the film when they were kids, both actors were simply adults to them. On top of that, Dern and Neill were both playing doctors—an accomplished paleobotanist was being played by a 23-year-old.

Dern and Neill are both returning to the Jurassic Park franchise for Jurassic World Dominion, which hits theaters in June. Now, Dern is 55, while Neill is 74.

In the interview with The Sunday Times, Neill shared that he was surprised to be cast in the first film, not because of the age gap with his scene partner, but because of her resume.

“Let me talk for Laura, because this is what men do in the patriarchy,” Neill joked (via People). “Laura was a tender age. I’m guessing … 23? And she was already an exciting actor—she had done David Lynch films. It was no surprise she was asked. But I was completely baffled to be called by Steven [Spielberg]. I didn’t get it.”

READ THIS NEXT: 32 Celebrity Couples With Huge Age Gaps.