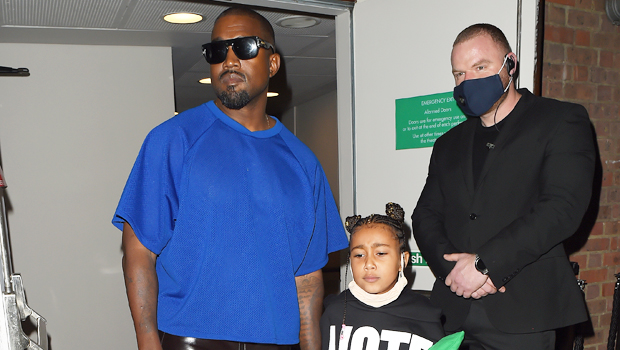 Kanye West, 44, stepped out with his daughter North West, 8, for a lunch date on Wednesday, May 25. The father-daughter duo were pictured leaving celebrity hotspot Nobu in Malibu, California, after enjoying a low-key meal together. Ye wore black sweatpants and a matching sweatshirt with the hoodie over his head, as seen in THESE PHOTOS. Kanye’s outfit choice seemed to be his way of trying to go unnoticed in public, but that didn’t work out for the famous rapper.

North, meanwhile, had no interest in hiding from the paparazzi. Ye and Kim Kardashian‘s eldest child walked out of Nobu wearing a black T-shirt with bright purple and orange graphics, as well as a pair of dark pants. North had her black hair styled in cute braids that reached her chest.

Kanye and his daughter’s lunch date was probably much-needed for the duo, who were recently continents apart due to Kourtney Kardashian and Travis Barker‘s wedding. North went with her mom to the Italian nuptials, though her siblings Saint, 6, Chicago, 4, and Psalm, 3, didn’t make the trip abroad. Kanye, meanwhile, recently enjoyed trips to Japan and New York City with his model girlfriend Chaney Jones, 24, who looks remarkably like his ex-wife Kim.

Kanye and Kim are in the midst of a divorce, but they are still putting co-parenting first for the sake of their four kids. Hulu’s The Kardashians has been showing better times between Kim and Kanye from scenes filmed in Fall 2021, prior to Kanye’s social media attacks against Kim and her boyfriend Pete Davidson. During the May 19 episode, Ye brought a massive fire truck to Kim’s house for the kids to ride on. He was there to take them to school, which “he loves to do,” according to Kim.

“No matter what we’re going through I always want my kids to be around their dad as much as possible and just to have their mornings with dad and get dropped off at school,” Kim shared in the episode.

Shannade Clermont: 5 Things To know About Woman, 28, Spotted Out With Kanye West