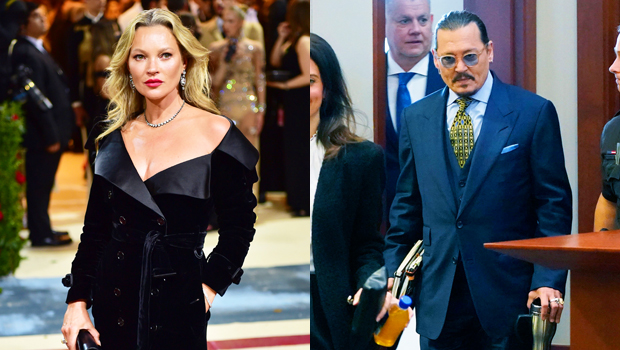 Kate Moss, who dated Johnny Depp for 3 years in the 90s, testified that Johnny never pushed her down a set of stairs in court via video testimony on Wednesday, May 25. The 48-year-old model was called on by Johnny’s legal team during the defamation trial against his ex-wife Amber Heard, 36. The model was brought in as a rebuttal after Amber mentioned her during her testimony in the trial.

After Kate detailed a nasty fall she took during a vacation to Jamaica, Johnny’s lawyers asked if he’d pushed her down the stairs during their trip or ever during their relationship, and the model said that he hadn’t. “No, he never pushed me, kicked me, or threw me down any stairs,” she said, during her very brief testimony.

During the prior question about Jamaica, Kate detailed an instance where she did fall, but she explained that the actor didn’t push her as they left a hotel room. “We were leaving the room, and Johnny left the room before I did, and there had been a rainstorm, and as I left the room, I slid down the stairs, and I hurt my back,” she said. “I screamed, because I didn’t know what happened to me, and I was in pain, and he came running back to help me, and carried me to my room and got me medical attention.”

Amber had referenced Kate during her testimony while detailing one of the alleged instances of abuse by her ex-husband. While speaking about one of their fights that she claimed turned physical in March 2015, she said that her younger sister Whitney Henriquez jumped in between the two of them, and she said that Whitney’s back was to the staircase. She referenced a rumor that the Pirates of the Caribbean star had thrown Kate down the stairs. “I just in my head instantly think of Kate Moss and the stairs, and I swung at him,” she said.

Johnny and Kate had a relationship from 1994 until 1997, per Marie Claire. The pair have never publicly discussed the rumors that he threw her down the stairs. When Amber made reference to the alleged incident, one of Johnny’s lawyers appeared to pump his fist and celebrate, before it was reported that she would testify.

Kate Moss’ Husband: Everything To Know About Her Ex Jamie Hince & Current BF

Amber had made a similar claim in her testimony at Johnny’s 2020 libel trial against The Sun. “I remembered information I had heard [that] he pushed a former girlfriend — I believe it was Kate Moss — down the stairs. I had heard this rumor from two people and it was fresh in my mind,” she said, according to The New York Post.

Johnny and Amber have been locked in a legal battle for weeks. Johnny had sued Amber for $50 million, citing defamation over a 2018 Washington Post op-ed that she wrote, which Johnny has claimed negatively affected his reputation and cost him movie deals. Amber countersued her ex-husband, also citing defamation.