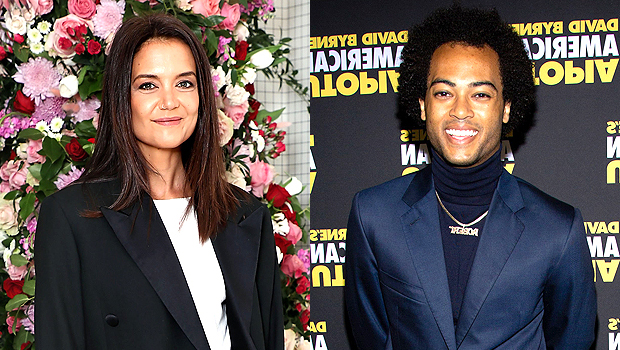 Finally! Katie Holmes and Bobby Wooten III are red carpet official. The adorable couple, who were seen kissing passionately in New York earlier in May, showed up at the Moth Ball’s 25th Anniversary Gala on Thursday. The event was held at Spring Studios in NYC, and Katie, 43, and Bobby, 33, posed happily on the red carpet for photographers during their sweet date night, per photos published by Just Jared.

Katie wore an orange maxi dress with romantic long sleeves, pairing the look with lovely drop earrings and a handbag. Broadway Musician Bobby wore a green suit with a black shirt, and the duo got cozy while letting the world know they are now an “item.” Katie and Bobby have been flaunting their love since at least April, and Katie was even seen introducing her mom to the distinguished-looking bass player and composer.

A source told HollywoodLife EXCLUSIVELY back in April that the Batman Begins actress is “absolutely smitten” with Bobby. “Katie was not looking for this to happen and she has been happy living her life and focusing on raising Suri,” the source mentioned Katie’s 15-year-old daughter with ex husband Tom Cruise. “So, when Bobby came into her life, she was apprehensive at first. But she agreed to go on a date with him because there was a mutual attraction and one date turned into two, which turned into three. And now here they are.”

Katie and Bobby do indeed seem to be enjoying one another’s company immensely, and the source said he gives her “butterflies. “She is absolutely smitten with Bobby,” the insider explained. “He is romantic and charming. Katie is allowing herself to feel these feelings and she knows that she is deserving of love. She is open to the possibility of having her happily ever after and although they are in the beginning stages of their romance, he gives her butterflies, which is all that any woman can hope for really.”

Katie’s film Alone Together, which she directed, is currently in post-production. She’s also currently filming Rare Objects and is also credited as the director on that film, per IMDb.

Tom Cruise’s Ex-Wives: Everything To Know About His 3 Marriages To Katie, Nicole, & Mimi