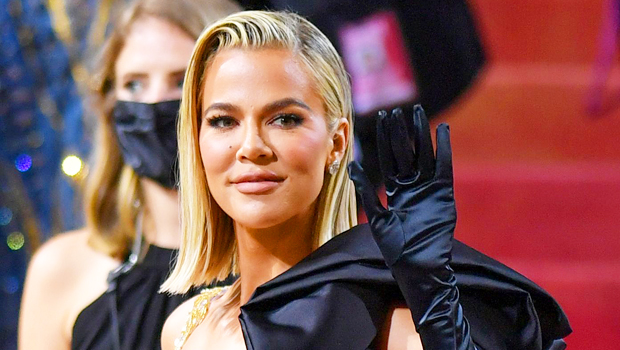 Khloe Kardashian knows how to make an entrance and she did just that at Kourtney Kardashian and Travis Barker’s wedding in Italy. The Good American designer arrived in Dolce & Gabbana like the rest of her family but had one of the most eye-catching looks of all with a giant gold headpiece that resembled an ancient sun crown.

She paired the dramatic accessory with an off-the-shoulder gown, which was spotted as she chatted with mom Kris Jenner on the balcony of an Italian villa, believed to be owned by Domenico Dolce and Stefano Gabbana. Khloe herself gave a sneak peek at the look in a quick selfie video from the reception with friend Simon Huck, shared to her Instagram story.

Khloe had already stolen the spotlight at a family dinner in Portofino ahead of the nuptials. The mother of one showed off her wild side as she draped her famous figure in a leopard-print dress. She looked like a glamorous international movie star by adding a set of blinged-out earrings and strappy high heels to her style. Khloe certainly knew how to bring the lewks halfway across the world!

Meanwhile, the lavish ceremony was the third wedding for Kourtney and Travis. The superstar couple officially tied the knot on May 15 in an intimate ceremony in Santa Barbara, where only Kourtney’s grandmother and Travis’s father were in attendance. They also eloped in Las Vegas after the Grammy Awards on April 3 following Travis’ performance at the show. However, that wedding, which was presided over by an Elvis Presley impersonator, was not deemed official, as they did not get a marriage license beforehand.

The trifecta of nuptials comes after Kourtney and Travis took their relationship from plutonic to romantic back in 2020. A year later, Travis popped the question to Kourtney on a gorgeous beach. Since then, they have been trying to add a new family member to the mix, with a recent episode of The Kardashians showing the couple in the aftermath of an unsuccessful embryo fertilization. However, Kourt and Travis aren’t giving up on having a little one to call their own anytime soon.