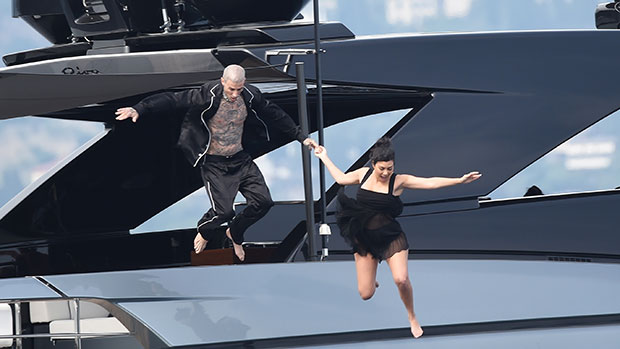 Kourtney Kardashian and Travis Barker began married life with a splash. On Monday morning (May 23), hours after Travis, 46, and Kourtney, 43, tied the knot in Portofino, Italy, the couple decided to have a bit of fun on their superyacht. Or, more specifically, have a bit of fun jumping off their yacht. As Travis and Kourt held hands, the two jumped off the massive luxury boat and into the Italian waters below. For this post-wedding plunge, Travis sported a pair of track pants and a suit jacket, while Kourtney opted for a sheer black dress.

This plunge comes days after Kourt and Travis did a much safer jump off the yacht (reportedly worth $14.2 million) with Kourtney’s son, Reign Disick. Reign, 7, held onto Kourt and Travis’s hands as they all leaped off the boat’s edge. Kourt – sporting a black bikini – seemed excited to jump in, judging by the wide, open-mouth smile on her face.

There was plenty of joy over the weekend for Kourt and Travis. The couple held a wedding ceremony on Sunday (May 22), roughly two months after the two had their try-out “marriage” in Las Vegas. (“There was no possibility to get a marriage license at that hour,” Kourt would explain later.)  A week before the ceremony in Italy, Travis and Kourtney secured a marriage license in Santa Barbara. This private ceremony ended with Travis and Kourtney riding in a classic muscle car, with a “JUST MARRIED” sign attached to the back. While this second ceremony made everything legal, the Sunday event in Italy marked the full family affair, one that saw the KarJenner clan clad in Dolce & Gabbana.

During the wedding reception, Kourt and Travis slow danced as opera singer Andrea Bocelli performed live. Travis also enjoyed a wedding tradition by removing Kourt’s garter, but he did so with his teeth. It’s unclear who caught the garter, usually a sign of the next person to get married. Travis might as well have given it to Machine Gun Kelly, since both he and his fiancée, Megan Fox, attended the wedding.

The rest of the guest list included Kylie Jenner, Khloe Kardashian, and Kim Kardashian. Kim’s beau, Pete Davidson, couldn’t make the wedding, as he had to be in New York to shoot his final episode of Saturday Night Live. Kendall Jenner was able to bring her longtime boyfriend, Devin Booker, as her date, but sadly, he couldn’t assist her when it came to walking up the steps to the wedding. “Oh sh-t, these stairs are crazy,” said Kylie Jenner while recording her sister’s struggle.