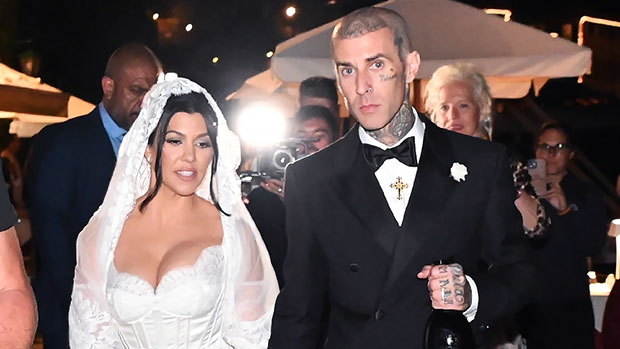 Kourtney Kardashian and Travis Barker only had eyes for each other as they shared a romantic slow dance at their May 22 wedding. Opera singer Andrea Bocelli performed live at the reception, with Kourtney and Travis swaying to the music behind him. The happy couple looked so in love, with their arms wrapped around each other during the magical moment. Their wedding guests watched on, and Kourt’s sister, Kim Kardashian, recorded some videos of the romantic dance.

Kourtney and Travis were actually officially married on May 15, when they obtained their marriage license at a courthouse in Santa Barbara. Kourtney’s grandmother, MJ, and Travis’s father were the only two guests in attendance, as they could not make it to Italy for the more lavish wedding. However, the couple celebrated with more family and friends in Italy just one week later.

Of course, Kourtney’s famous sisters were in attendance for the big wedding. Her three children were also part of the ceremony, along with Travis’s two kids and former stepdaughter. Kim also brought her daughter, North West, along for the wedding, and Kylie Jenner’s daughter, Stormi Webster, was in attendance as well.

Unfortunately, Kim’s boyfriend, Pete Davidson, had to stay home in the States to film his final episode of Saturday Night Live. Kylie’s partner, Travis Scott, was also nowhere in sight. However, Kendall Jenner did have her man, Devin Booker, by her side throughout the jam-packed weekend of family events. Unsurprisingly, Kourtney’s ex, Scott Disick, did not score an invite to her wedding, although the two have an amicable relationship as co-parents.

Kourtney wore a white mini dress to marry Travis, along with a long veil that had tributes to some of the rocker’s tattoos. During the reception, she changed into a sexy black mini dress, as well. The whole family, including Kourtney and Travis, wore Dolce & Gabbana outfits throughout the weekend.