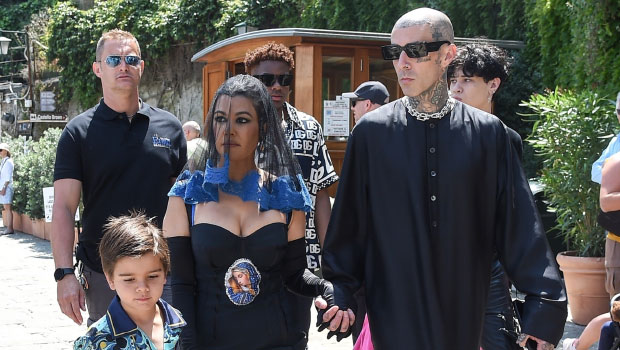 Kourtney Kardashian wore a sexy black mini dress and veil as she held hands with Travis Barker one day ahead of their reported wedding! The reality star, 43, looked gorgeous in what appeared to be another Dolce & Gabbana design, adorned with a painted image of Madonna and baby Jesus in the center, on Saturday, May 21 in Portofino, Italy. Her veil was unique, too, with an electric blue lace trim that matched the straps of the lingerie-inspired ensemble. She finished the look with opera gloves and a simple black sandal.

The Blink 182 drummer, 56, twinned in all black wearing an oversized Reverend-inspired look consisting of a long cassock style dress, black pants, and leather shoes. The rocker added a chunky silver necklace to the outfit, along with a pair of black sunglasses. Kourt held onto 7-year-old son Reign‘s hand, as well, who stole the show in a blue silk-inspired pajama set with white sneakers.

Kourtney was seen on a boat in the same look as she snuggled with daughter Penelope, 9, and Reign heading to their destination. The entire Kardashian clan appeared to be present on the $14 million yacht owned by Dolce & Gabbana, including Khloe Kardashian, 37, mom Kris Jenner, 66, Kim Kardashian, 41, and her daughter North, 9, just to name a few. Travis’ kids Landon, 18, Alabama, 16, and stepdaughter Atiana, 22, were also spotted on the boat as the crew made their way to the mid-day pre-wedding celebration.

Travis and Kourtney are already legally wed following a ceremony at a Santa Barbara Courthouse on Sunday, May 15 which was attended by just her grandmother MJ and his father Randy Barker. The Poosh founder wore a similar white mini dress and veil for the occasion, also designed by D&G. The couple, known as “Kravis,” are set to celebrate with a wedding celebration for their family and friends at the historic Castello Brown in Portofino, Italy on Sunday, May 22. Both weddings come after a non-legal Las Vegas ceremony in April 2022 where they were unable to get an official license at 2 a.m.