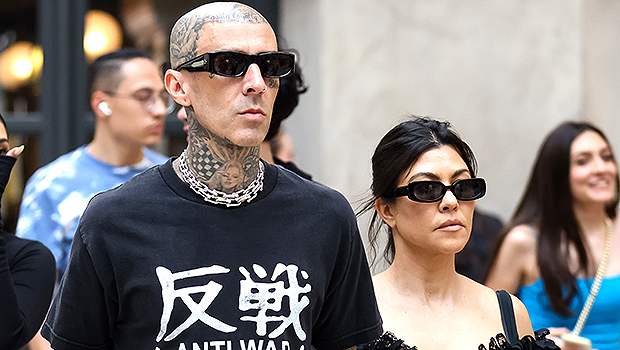 Travis Barker and Kourtney Kardashian are keeping their Italian love alive! The newlyweds were spotted out in Milan recently, touring the city following their gorgeous Portofino nuptials. The couple wore their signature dark colors for the outing, with Travis rocking a black t-shirt with “ANTI-WAR CRASS” white writing on the front and jeans while Kourt wore a frilly, black off-the-shoulder, long-sleeve crop top and high-waisted black trousers. “Kravis,” as they’re called, both sported chic, rectangular black sunglasses to complete their looks.

The couple was also spotted with Travis’ kids, Alabama Barker, 16, and Landon Barker, 18, who walked along the Italian city with their dad and newfound stepmom. Alabama walked next to Kourtney in an equally Eurpoean-esque look, rocking a mid-length black leather coat over a black-and-white-striped two piece or jumpsuit. The teen wore her bright blonde locks long and kept it cool behind dark black sunglasses.

The appearance comes after Kourtney added Barker to her name on her Instagram account. “Kourtney will always be known as Kourtney Kardashian, but she decided to use Kardashian Barker” after she tied the knot, a source close to her told HollywoodLife EXCLUSIVELY on May 23.

“She really feels that it is meaningful to Travis and herself. Her family was advising against [her changing her last name to just Barker] because she has so many ties to Kardashian,” they continued. “They suggested that she combine their last names, like what Kim did when she married Kanye [West], so that is ultimately what she decided to do.”

Kourtney and Travis’ third wedding (following a “practice” in Las Vegas on April 4 and a courthouse ceremony in Santa Barbara) proved to be as high profile as it was highly anticipated. The massive family event, which included the Kardashian and Barker families as well as celebrities including Megan Fox and Machine Gun Kelly, will be included in Hulu series The Kardashians. The affair was definitely the opposite of their Santa Barbara ceremony, which Kourtney apparently kept very intimate on purpose, inviting only her grandmother Mary Jo “MJ” Campbell from her side of the family.