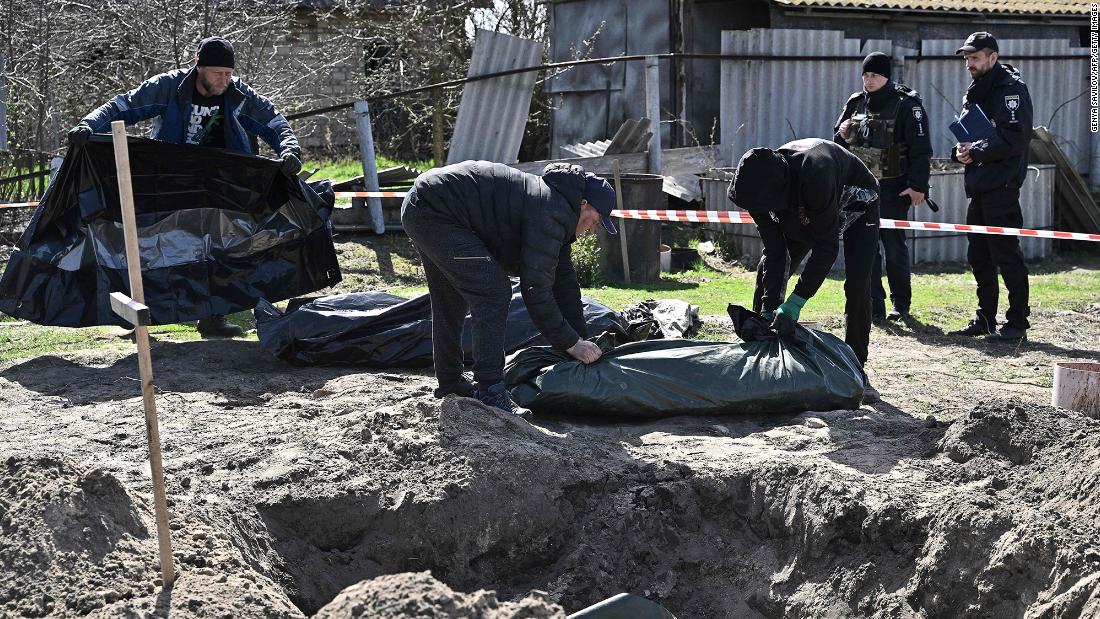 The legal report, signed by more than 30 leading legal scholars and genocide experts, accuses the Russian state of violating several articles of the United Nations Genocide Convention. It warns there is a serious and imminent risk of genocide in Ukraine, backing the accusations with a long list of evidence including examples of mass killings of civilians, forced deportations and dehumanizing anti-Ukrainian rhetoric used by top Russian officials.

“We assembled top legal experts from around the globe who then examined all the evidence and they came to the conclusion that the Russian Federation bears responsibility for breaches of the Genocide Convention in Ukraine,” Azeem Ibrahim of the New Lines Institute told CNN. Ibrahim visited Ukraine in March to gather evidence for the report.

“This is a very thorough and detailed examination of extensive evidence,” he said. “What we have seen so far is that this war is genocidal in its nature, in terms of the language being used and the manner in which it is being executed. That’s very, very clear.”

Under the UN Genocide Convention, its signatories have a legal obligation to prevent genocide — and the report is urging the international community to act.

“We have no time at all, we believe that there is a very serious risk of genocide,” Ibrahim said. “Every country that is a signatory to the Genocide Convention, and that’s 151 countries including the Russian Federation, every country has to do whatever it can to put a stop to this, otherwise they will also be in breach of the convention.”

In one of the most chilling parts of the report, the group makes a direct comparison with the 1995 Srebrenica massacre, urging the world to act before it’s too late: “The details of the mass murder of over 7,000 Bosnian Muslim boys and men in Srebrenica only emerged before the international community when it was too late to prevent a genocide that occurred in a matter of days. In 2022, we have the capabilities to accurately track similar atrocities as they unfold and respond accordingly.”

The report points finger directly at Moscow, accusing Russia’s top officials of orchestrating incitement to genocide and laying the groundwork for future genocide by repeatedly denying the existence of a Ukrainian identity.

The Kremlin has forcefully disagreed with President Joe Biden’s statement in April that he considered Russia’s actions in Ukraine a “genocide.”

The New Lines and Raoul Wallenberg Centre report says the Russian state is breaching Article II and Article III (c) of the Genocide Convention. Article II of the convention states genocide is an attempt to commit acts “with an intent to destroy, in whole or in part, a national, ethnical, racial or religious group.” Article III (c) concerns the “direct and public incitement to commit genocide.”
As examples of the evidence that Russia is breaching the convention, the experts highlight repeated statements made by Russia’s President Vladimir Putin who has made it clear he believes Ukraine has no right to exist as an independent state.

They also point to the dehumanizing language used by top Russian officials to describe Ukrainians — including worlds like “bestial,” “subordinate” and “filth” — as well as their portrayal of Ukraine as a “Nazi state” and an “existential threat” to Russia.

But the report goes further than alleging Russia is intending to commit genocide, accusing Russian forces of carrying out a “pattern of consistent and pervasive atrocities against Ukrainian civilians collectively” in the course of the invasion.

It says that the well-documented massacres and summary executions in Bucha, Staryi Bykiv, and in Sumy and Chernihiv regions, Russia’s deliberate attacks on shelters, evacuation routes and healthcare facilities, as well the indiscriminate targeting and bombardment of residential areas, rapes, sieges, grain thefts and forced deportations to Russia all amount to “genocidal pattern of destruction.”

CNN has independently confirmed many of the atrocities mentioned in the report.

The New Lines Institute and Raoul Wallenberg Centre have previously investigated the Rohingya and Uyghur genocides in Myanmar and China respectively, and produced the first report that determined that China’s actions in Xinjiang constituted genocide under the Genocide Convention.

The team of authors includes David Scheffer, who played a pivotal role in talks establishing the International Criminal Court as the first ever US Ambassador at Large for War Crimes Issues.

Canada’s former ambassador to the UN Allan Rock and Charles Taku, the lead counsel at the International Criminal Tribunal for Rwanda and Special Court for Sierra Leone were also involved.