Madonna’s Son, David, 16, Towers Over The Pop Star, 63, As They Hold Hands At Boxing Event 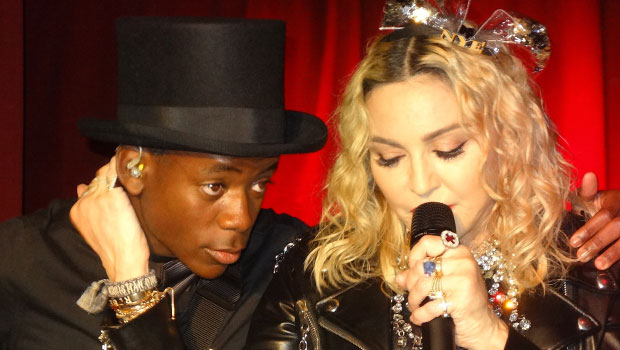 Madonna, 63, and her son David Banda‘s bond was on full display during their latest outing. The singer and the 16-year-old held hands when they arrived to watch the fight between Davis and Romero at the WBA World Light Championship at Barclays Center in Brooklyn, NY on May 28 and wore Adidas tracksuit outfits. The doting mom’s outfit included a baggy black and white zip-up jacket and matching pants and the teen’s included a red and white v-neck dress.

Madonna also added a pair of pink framed sunglasses to her look as her long blonde hair was down and parted in the middle. She also accessorized with multiple necklaces, bracelets, and earrings as she topped her outfit off with black gloves. David also accessorized with multiple necklaces and sunglasses, and wore black and white sneakers with his outfit.

Madonna’s latest outing with her fashionable son comes after she made headlines when she had a night out with FKA Twigs on May 25. The “Live to Tell” crooner was spotted leaving London’s members-only club The Twenty Two in Grosvenor Square with the British musician as they held hands and wowed in epic fashion choices. Madonna wore a white patterned dress under a black blazer with fishnet tights and black boots as FKA Twigs donned and brown and red sweatshirt under a gray coat, a gray skirt, and tan cowboy boots.

Madonna’s Sexiest Pics: Look Back At Some Of Her Raciest Outfits Over The Years

The talented artists also rocked epic hairstyles and headgear with their looks. Madonna had two braids in her hair as she added sunglasses to the overall style and FKA Twigs wore a tan head wrap with reddish tints as she also added sunglasses to her look. The ladies topped things off with various pieces of jewelry, including necklaced and earrings.

When Madonna’s not turning heads during outings with her kids and fellow musician friends, she’s getting attention for sharing memorable family photos on social media. The mother-of-six recently celebrated Easter with her kids and took to Instagram to share a fun video full of clips of the exciting day. The brood enjoyed painting eggs and sharing laughs in the clips the loving parent captioned the post with, “Couple of crazy bunnies.”