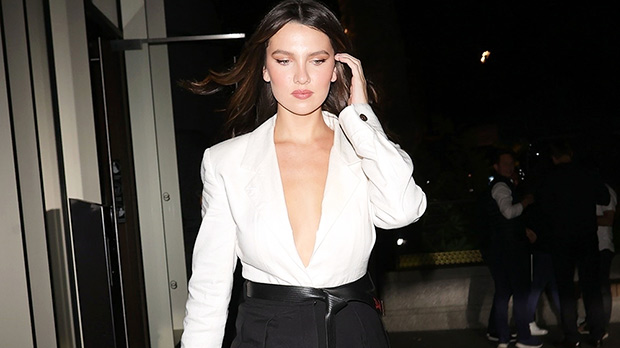 If Maya Henry was still upset over the dramatic end to her and Liam Payne‘s engagement, she didn’t look it when dining out in London on Thursday (May 26). Maya, 21, was chic as she exited Nobu in Mayfair, wearing a black and white ensemble perfect for the pre-summer atmosphere. Maya rocked a low-cut white top, a pair of billowing black pants, and a pair of sleek black pumps. It was an effortless look that seemed to convey her post-breakup vibe.

After being together for nearly three years, Liam, 28, and Maya’s relationship – and two-year engagement – ended in a moment of cringe. “I love all of the fans so much, but please stop sending me these pictures of my fiancé wrapped around another woman,” Maya commented on a Liam Payne fan account’s photo of the One Direction member snuggled up with a person later identified as Aliana Mawla. “This is not me, and it’s hard enough knowing this has happened without seeing it. Enough now,” Maya added.

Liam’s rep confirmed that the couple had split, telling PEOPLE that the couple had broken up “over a month ago.” Despite this, allegations of cheating began to fly, which seemingly cut Liam deep. “Liam told friends that he and Maya broke up a while ago, so it’s really not fair that he’s being made to look like a cheater,” a source told HollywoodLife EXCLUSIVELY. Liam finds the accusations to be “upsetting,” and he’s doing his best to keep a stiff upper lift while weathering the drama.

Liam Payne: Photos Of The Singer & One Direction Star

After the photo drama went down, Liam was spotted walking arm-in-arm with Aliana at Heathrow airport after a long flight from Las Angeles. Liam and his new girlfriend snuggled close as they made their way through the terminal to pick up their luggage and meet a friend before being escorted to a waiting car.

“I’ve just not been very good at relationships,” Liam said during a June 2021 episode of The Diary of a CEO podcast. “I know what my pattern is with relationships at this point. I’m just not very good at them. I need to work on myself first before I put myself onto somebody else. I just wasn’t giving a very good version of me, and I didn’t appreciate or like me. I feel better out of it.”

Liam Payne’s Girlfriend: Everything To Know About The Singer’s Dating History