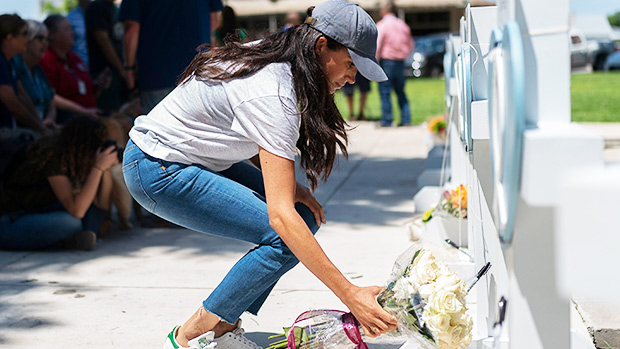 Megan Markle appeared without fanfare in Uvalde, Texas on Thursday (May 26) to donate food and pay her respects to the victims of the tragic Robb Elementary School shooting on May 24. The Duchess of Sussex and wife of Prince Harry paid silent tribute to the 19 children and two teachers who perished in the vicious attack. Volunteers at the Herbie Ham Activity Center, where a blood drive was in progress, accepted Megan’s donations of two large bags of food earmarked for blood donors, according to BuzzFeed News.

The Duchess, 40, also visited the Uvalde County Courthouse, where she laid white flowers at a makeshift memorial for the victims. “I had no idea who she was,” Gloria Contreras, a volunteer, told BuzzFeed News about Meghan’s unassuming visit. “She was just carrying on a conversation like her and I knew each other for years. We were just talking about, you know, the situation, and what happened what we were doing here. I told her about us giving out water to the people and feeding them.”

Georjean Burnell, another volunteer, said Meghan was “sweet” during the visit. “She was just really sweet. She just kind of walked in with her crew and started putting ice waters in the bucket with us and laying out chips for the people who were needing snacks before and after donating,” she told the outlet.

Meghan Markle: Photos Of The Duchess Of Sussex

Meghan, wearing a blue ball cap, simple white t-shirt and blue jeans, and white sneakers, flew under the radar and made the visit without much of a fuss. At one point, Meghan appears to have posed for a photo with the volunteers while wearing a mask. “It’s funny, we didn’t even know it was her until after she left and now we’re so sad,” Georjean said. “I mean, to be honest, we all thought she was our neighbor.”

The deadly shooting spree carried out by 18-year-old Salvador Ramos marks yet another mass shooting for a weary nation, this one all too similar to the Sandy Hook Elementary shooting in 2012 that left 26 dead. Meghan’s visit follows a deluge of celebrity concern and political activism surrounding the issue of gun rights in the United States.

Meghan is set to head to the U.K. with her family for Queen Elizabeth‘s Platinum Jubilee beginning June 2. It will be her first visit back as a family since she and Harry officially renounced royal life two years ago.