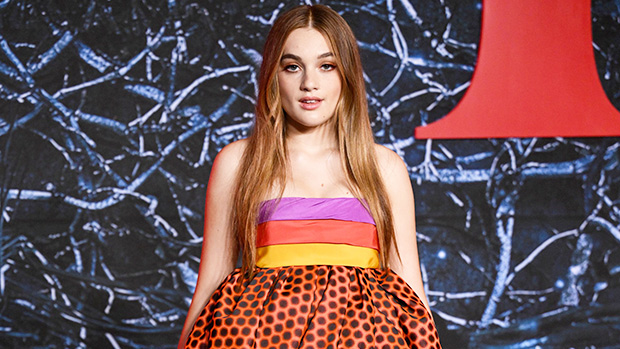 Elodie Grace Orkin is one of the new faces of Stranger Things you’ll be seeing when the show returns for season 4 on May 27. The young actress stars as Angela, one of Eleven and Will’s classmates in California. For Elodie, watching Stranger Things actually “inspired” her to pursue a full-time acting career, and now she’s a part of the global phenomenon.

“I’ve been acting my whole life in musical theater and stuff, but I decided that I wanted an agent and I wanted to start professionally acting after I saw Stranger Things because I’m the same age as Millie [Bobby Brown]. And to see another girl my age doing this dramatic acting, I really wanted to be a part of that. So it was a really crazy full-circle moment that I never imagined could happen that I ended up being on the same show that inspired me to start,” she told HollywoodLife EXCLUSIVELY.

Elodie called the Stranger Things production an “insane experience,” and she “learned a lot” from her fellow actors on set. From picking up technical aspects of production to “fully immersing yourself in the character,” Stranger Things proved the best classroom for Elodie to grow and learn.

The actress could barely reveal any details about her new character, but she did note that season 4 is much “more mature” than previous seasons “because the characters have matured, obviously. They’ve grown up. There’s obviously a lot of different cogs to the storyline than I’d say in the previous seasons. It’s complex and a little more grown-up.”

The show is in the thick of the 1980s when season 4 begins, which means big hair, colorful clothes, and more. To play Angela, Elodie had to wear a wig. “Honestly, me and that wig, we had a little romance,” Elodie joked. “I loved her, but I also hated her. Oh my god, I’m referring to the wig as a she. Anyways, I loved my wigs so much. It was so extreme and so 80s. I loved all the clothes. Everything was just over the top and so much fun.”

David Harbour’s Weight Loss: What The ‘Stranger Things’ Star Has Said About His Body Transformation

The road to season 4 finally premiering on Netflix has been a long one for the cast and crew. Season 4’s production was delayed significantly by the COVID-19 pandemic. Elodie booked the role of Angela two years before she even stepped foot on set. “It honestly feels surreal,” Elodie said about the premiere of Volume 1 finally being within grasp.

She admitted that it hasn’t been easy keeping details of her role a secret from her loved ones. “It’s been difficult because I had to wait two years to tell anyone,” Elodie told HollywoodLife. “I knew for a whole two years that my dream had come true, basically. Honestly, I consider myself now the best secret keeper. I say this to all my friends, like if you don’t trust me, then you shouldn’t trust anyone because I can keep a secret.” Volume 1 of Stranger Things season 4 premieres May 25 on Netflix.