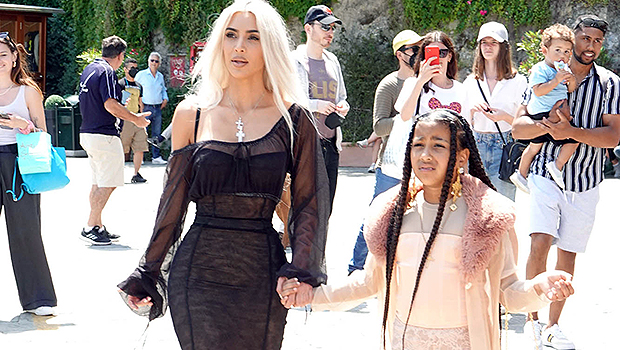 Kim Kardashian, 41, appeared to have a great time at Kourtney Kardashian and Travis Barker‘s wedding reception as she donned a sparkly silver and black outfit with long sheer sleeves. The doting mom busted some impressive moves in a new video that was posted to her and her eight-year-old daughter North West‘s TikTok account on May 23. The clip was set to the song “We Are Family” by Sister Sledge, which seemed to go along perfectly with the happy content.

In addition to Kim, other wedding guests danced in the epic video, including KarJenner mom Kris Jenner, Khloe Kardashian, Machine Gun Kelly, and Kourtney and Travis’ kids. The bride and groom were also spotted letting loose on the dance floor in after-ceremony clothes. North made a cameo in one of the last clips of the video as she smiled and posed with her mom.

Kim and North’s latest post is just one of many that have been shown from the incredible wedding, which took place in Portofino, Italy over the weekend. Most of the KarJenner family showed up for the festivities and supported Kourtney and Travis as they exchanged vows and partied all night long. They all wore fashionable wedding attire, including floral gowns and feather boas.

Days before the Italian wedding, which was where Kourtney and Travis said “I do” for the third time, the KarJenners were photographed walking all around Portofino, where they took in sights and fun activities. Kim flaunted a dark gray stretchy two-piece ensemble with boots when she arrived in the country. She had her long blonde hair down and parted in the middle and was all smiles as she walked by onlookers who were excited to see her.

Kim’s visit to Italy included her kids but it didn’t include her boyfriend Pete Davidson. The comedian was busy in New York City preparing for his last episode on Saturday Night Live during Kourtney and Travis’ wedding, but his gal pal seemed to  show him support online when she shared a close-up photo of her long pink manicured nails, and one had a bedazzled “P” on it. Although she didn’t confirm the letter was for Pete, fans assumed it was her way of keeping her beau near and dear while they were apart.