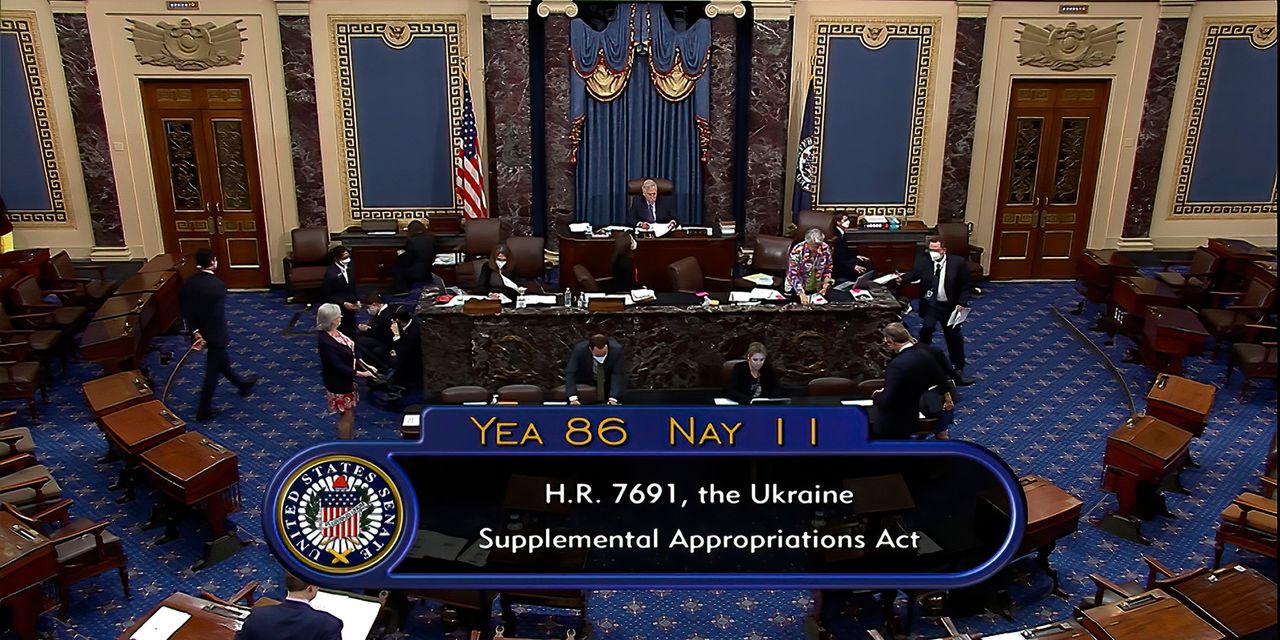 Helping Ukraine defend itself against Russian aggression is clearly in the national interest of the U.S. So was opposing the flawed Ukraine aid package Congress passed last week. For saying so, the Heritage Foundation was accused by some on the right of abandoning conservative principles or embracing populist isolationism. Neither charge is true. But in one sense, both are welcome.

The war in Ukraine may finally force conservatives into the intramural foreign policy debate they have put off for more than 30 years. Heritage is committed to President

belief in “peace through strength.” Today, conservatives differ over how to apply that maxim. Washington elites say we are divided into reckless neoconservatives and naive isolationists. In fact, conservative-minded Americans fall somewhere in between those two camps. But where most elected conservatives stand on the spectrum isn’t clear. The vote in Congress wasn’t for or against support of Ukraine. It was for or against an unpaid-for, unamendable, take-it-or-leave-it $40 billion omnibus proposal cobbled together outside the committee process.

Each of the 57 members of the House and 11 Senators who voted against the bill would agree that the Ukrainian people deserve every plaudit, prayer and antitank missile coming their way. But U.S. aid to Ukraine is about our interests, not theirs. And sympathy for Ukraine does not pre-require trust in Congress, least of all through yet another of its fake, frenzied, “must pass” fire drills.

Fiscal cliffs. Omnibuses. Government shutdowns and debt limit deadlines. Bailouts. Trade deals. How many trillions of dollars has Congress allotted in recent years up against supposedly urgent deadlines necessitating immediate passage of bills negotiated in secret via processes that precluded debate or scrutiny?

These aren’t isolated cases anymore but rather Congress’s preferred mode of legislating, ideally suited to limit dissent and duck difficult questions. Congressional leaders’ approach seems to be, “Trust us, we know what we’re doing.” The $40 billion aid bill was passed the way it was not to protect Ukraine from Russia, but to protect Congress from accountability to the American people. Party leaders and Pentagon officials, who benefit from the simplistic and urgent framing, force lawmakers to choose between the extremes of all or nothing.

Consider three conservative critiques of the bill: that it funds government pensions for Ukrainian bureaucrats instead of battlefield needs; that it funds unlawful immigration benefits; and that it lacks the oversight of a specially assigned inspector general. These points could have been debated and voted up or down in an hour. But that’s not how the Democrats running Washington manage disagreement. Instead, they steamroll it, serving their short-term interests at the expense of the country’s long-term interests.

This is how the GOP establishment for decades dealt with populist dissenters to its nonnegotiable, corporate-friendly positions on immigration, trade, spending, and social issues. A secure, confident conservatism should welcome internal debate, not impugn it—as the last generation of Beltway failures attest. Was conservatism well served by accusing skeptics of the Iraq War of “hating their country”? Or accusing amnesty opponents of racism? Calling TARP-doubters “nihilists”?

This is the overarching issue of our time: Washington leaders have lost the trust of the American people and are consolidating power in a doomed effort to keep it.

The country is in the midst of a political realignment. Americans are looking for a Third Way between the failed establishment on both sides of the aisle, on domestic, social, and foreign policy. To find the Third Way, we need candid debates about core principles and goals. Conservatives don’t need to choose between governing responsibly and advancing American interests. But striking that balance requires asking the right questions, starting with: Does this decision put the American people and their interests first?

The $40 billion Ukraine aid legislation did not do that. It was written and shoved through Congress not to invite debate but to preclude it; not to reflect popular consensus, but to thwart it.

Mr. Roberts is president of the Heritage Foundation.