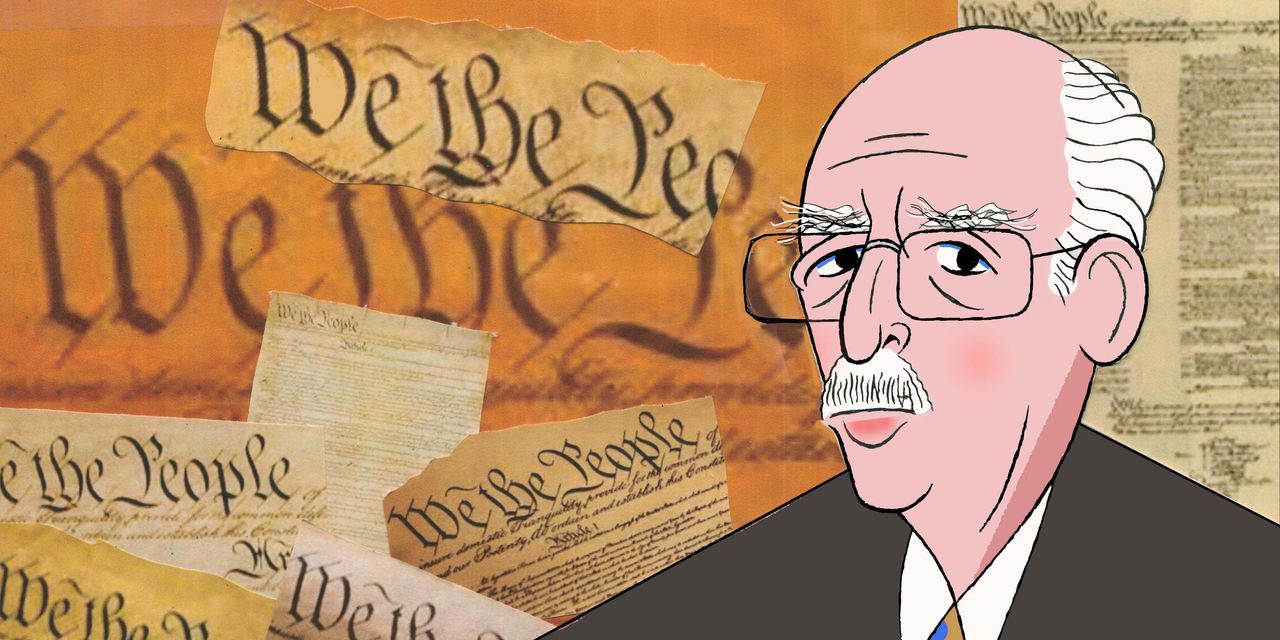 has a passion for civics education. When the Journal was offered an interview with him three months ago, the subject seemed important but dull. By the time we meet in his chambers in Washington on May 13, it has taken on an edge. Days earlier, a few miles away in Virginia, protesters gathered outside the home of Justice

author of a leaked draft opinion that would overturn Roe v. Wade, the 1973 decision that found a constitutional right to abortion. There have also been pro-Roe pickets at the residences of Chief Justice

and other conservative colleagues.

Judge Ginsburg, who turns 76 next week, is a senior judge on the U.S. Circuit Court of Appeals for the District of Columbia. He still hears cases in semiretirement and is circumspect at first about discussing current events. But I manage to coax him into expressing a frank opinion: “Roe is clearly an aberration.” Overturning it “would be technically correcting an aberration,” he adds, “but it implicates more than that, because it also raises the question of stare decisis,” the doctrine of standing by precedent.

He doesn’t say how he’d resolve the stare decisis question, and he says he hasn’t read the leaked Alito opinion in Dobbs v. Jackson Women’s Health Organization. But he knows its gist well enough to cite the fierce criticism of it as an example of civic and constitutional ignorance. “So many people think the Supreme Court is something of a legislature,” he says. “They have no real concept of how a case comes to the court, how it’s defined, and what the court’s powers are.”

People think the court is about to outlaw abortion, when in fact overturning Roe “has the effect of leaving that question back to the states, where it was before, in 1973.” Not all states would revert to the restrictions of half a century ago: “New York is not going to be abolishing abortion. Quite the opposite. They’re thinking about providing funds for people coming from a state that is stricter on abortion.”

Americans of all political stripes, Judge Ginsburg says, are woefully uninformed about constitutional matters: “22% of adults can’t name a single branch of government.” The schools no longer impart “an education that encompasses the minimum that a citizen should know about how our government works, why it was structured the way it was, and what their rights and obligations are.”

He launched an online course last year called Civics Fundamentals in partnership with izzit.org, an education nonprofit. He wants to make the U.S. Citizenship Test, administered to naturalizing immigrants, a high-school graduation requirement. The test comprises 100 questions, and he has made 2½-minute explanatory videos on each of those questions as teaching aids, several of which we watch together on a computer in his office.

Judge Ginsburg concedes that most Americans “probably know that they have a right of free speech, and maybe freedom of religion and the Second Amendment right to carry a gun,” though he says they probably learned all that from television, not in school. And few understand federalism, “the whole distinction between local, state and federal government,” which is the basic structural question at issue in Roe and Dobbs.

The protests at justices’ homes are “a significant indicator of just how mistaken people are of the function of ‘the least dangerous branch,’ ” he says, quoting

Judge Ginsburg offers a quick civics lesson, explaining that judicial rulings aren’t “self-enforcing” but depend on the executive branch. Presidents have almost always respected judicial authority. A rare exception came in 1832, when

is supposed to have said of the chief justice: “John Marshall has made his decision, now let him enforce it.” Judge Ginsburg likens Jackson’s remark to a similar quote, attributed to Stalin: “How many divisions does the pope have?”

Ignorance of basic civics, he says, “makes citizens susceptible to being misinformed easily by the popular media and by conniving politicians.” The latter “are well-informed and know that the court is not supposed to be responding to pressure exerted by demonstrators in front of the building or at their home. But they nonetheless encourage this misapprehension among the public that they are supposed to respond.”

He allows that “I don’t know of any politician who’s said you should go to the homes of the justices. . . . But standing on the steps of the Supreme Court and addressing a rally? It’s not inherently uncivil, but it was, in fact, done in a threatening way by some members of Congress.”

now the majority leader, stood on a sidewalk outside the Supreme Court and declaimed: “I want to tell you, Gorsuch; I want to tell you, Kavanaugh: You have released the whirlwind and you will pay the price. You won’t know what hit you if you go forward with these awful decisions.” Mr. Schumer apologized after a public rebuke from Chief Justice Roberts. (Mr. Schumer was referring to a Louisiana abortion case, June Medical Services v. Russo, which the court had just heard. The decision ended up going his way, with the chief justice concurring with the four liberal justices on the outcome but declining to join their opinion.)

Targeting justices at their homes is an escalation, which Judge Ginsburg describes as “unprecedented” and “unthinkable, even in recent years.” This development is “unfortunate in many respects, not only for the privacy and security of the justices, which has to be guarded more intensely now,” but also because it encourages misunderstanding about the role of judges. They can’t resolve cases by “holding a finger up in the air to see which way the wind is blowing, let alone having the wind come to their house and blow.”

who as an NAACP lawyer had successfully argued Brown v. Board of Education (1954), in which the Warren court held unanimously that black children had a right to attend desegregated schools. At least at first, that decision rivaled Roe as the 20th century’s most contentious. “The South was heavily dotted with billboards saying ‘Impeach Earl Warren,’ ” Judge Ginsburg notes. But nobody thought—or dared—to picket the justices’ homes.

Not that the South was an idyll of civility. Most of Marshall’s work as a lawyer involved representing criminal defendants. Every time he did so, Judge Ginsburg says, “he took his life in his hands. He was darn near lynched one time before the police showed up.”

Marshall is “a very interesting character,” Judge Ginsburg adds. “He was basically a conservative. He believed in the law and in American institutions.” He had “disdain for, first, the communists, then the back-to-Africa people, then for marching in the streets . . . the civil-rights demonstrators.” Judge Ginsburg corrects himself and says Marshall disdained the leaders of civil-rights marches: “Marshall said, ‘You go to court. That’s the way to get things done.’ ” A portrait of Marshall hangs in Judge Ginsburg’s office, sketched by “a local African-American artist who’d never met him.”

The judge describes his own legal philosophy as “textualist, originalist, and very conscious of not deciding issues that needn’t be decided.” It’s easy to see why Roe v. Wade irks him. “It’s a vanity for judges to decide something that isn’t necessary to resolve a case and get their views out on the record. So I try to narrow the focus of my decisions and of those of my colleagues, if there’s somebody who I think is venturing into a territory that we needn’t explore.”

Judge Ginsburg cites a “wonderful” book by his friend

a Harvard legal scholar. “Abortion and Divorce in Western Law” is a study of 20 Western countries that changed their abortions laws contemporaneously—by legislation everywhere except in the U.S. In the other 19 countries, abortion is “not still a burning issue, because when a legislature acts, there has to be compromise,” Judge Ginsburg says. “It’s set up so that nothing can happen unless people compromise.”

That, he says, it the “genius” of representative democracy: “We’re all disappointed on some aspect and satisfied on some other, and we accept that as authoritative because it was reached through a democratic process.” When that process is “arrogated to a nonlegislative body,” it doesn’t have that legitimacy. “In judicial decisions, you don’t typically get a compromise, you get a dissent. Whereas in a legislature you get compromise and a result—or nothing happens.”

In Roe specifically, he says it would have been better to “follow in the tracks of Ruth [Bader] Ginsburg” (no relation), who was his colleague on the D.C. Circuit until she joined the Supreme Court in 1993. In a 1992 lecture she argued, in his paraphrase, that “a narrower decision involving the Texas law” at issue in Roe, “which was very extreme among the states, would have been perfectly sufficient to galvanize the discussion and the legislative process in the states.” This process “was already under way, actually. There was a good deal of activity under the influence of the women’s movement in the state legislatures. Several states had altered their laws. Others were considering doing so and some had decided not to.” The high court “simply truncated” that process.

“Ruth was exactly right,” Judge Ginsburg says. “Please be sure to mention Ruth in this.” (Once on the court, Justice Ginsburg was a consistent supporter of Roe—and its 1992 successor, Planned Parenthood v. Casey—whatever her qualms about its conception.)

Nearly 35 years ago, Douglas Ginsburg came close to a Supreme Court nomination. After the Senate rejected

(another D.C. Circuit colleague) in 1987, President Reagan announced his intention to name Judge Ginsburg, then 41, for the seat. But NPR’s

reported that he had smoked marijuana as a college student and a young professor at Harvard. Such revelations soon became commonplace as baby boomers rose to positions of power. But nine days after Reagan’s announcement and before being formally nominated, Judge Ginsburg withdrew from consideration.

He declines to discuss the episode, saying with a chuckle: “There wasn’t much there, so there’s very little to talk about. It was nine days.” Nor will he be drawn into a discussion of how his jurisprudence would have differed from that of the eventual appointee, Justice

“There isn’t a single major case that Justice Kennedy either wrote or accounted for, for which I’ve sat down and read the briefs. So I really wouldn’t venture an opinion about whether he was doing things different than I would have done.”

Thirty years ago, the last time the high court considered overturning Roe v. Wade, Justice Kennedy joined the 5-4 majority in Casey to let it stand. History, and contemporary civic life, might look very different had there been a Justice Ginsburg in 1992.

Mr. Varadarajan, a Journal contributor, is a fellow at the American Enterprise Institute and at New York University Law School’s Classical Liberal Institute.