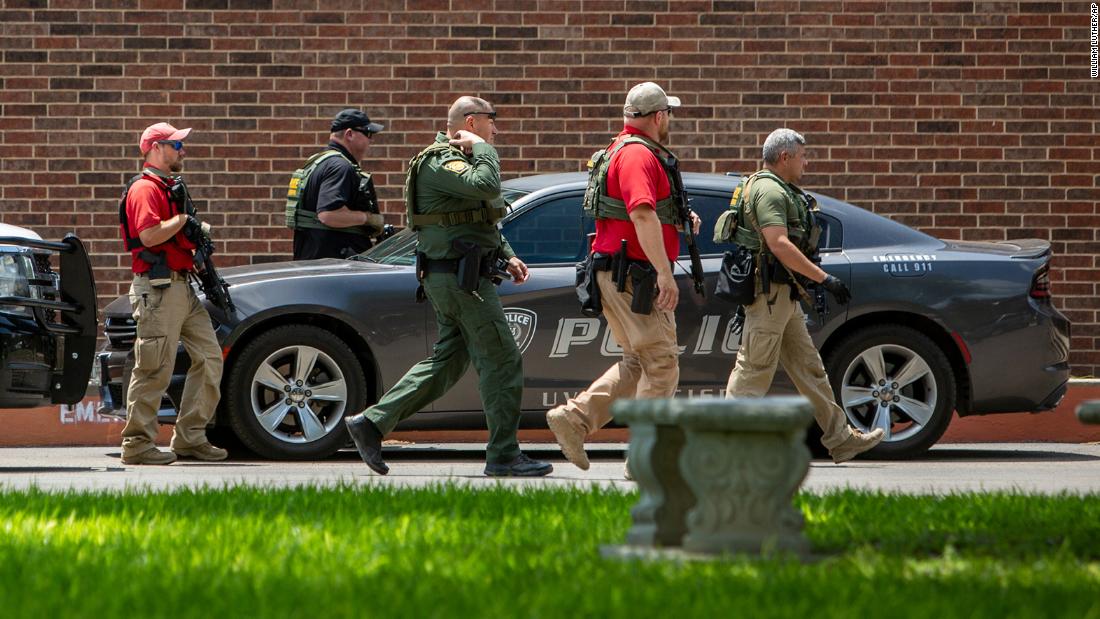 The violent act shook a nation already reeling from another mass shooting across the country just 10 days ago. Parents waited late into the night at a nearby civic center to learn whether their children had survived, with some telling CNN they had to give DNA samples to assist authorities in identifying children.

The 18-year-old gunman, who was killed by law enforcement, is believed to have shot his grandmother before driving to the school to carry out to attack, according to the Texas Department of Public Safety.

As he tried to enter the school, he was engaged by school district police officers, but was still able to enter the building and go into multiple classrooms, DPS Sgt. Erick Estrada said. Authorities say he was armed with a rifle and carrying a backpack.

Tuesday’s tragic event marks the deadliest school shooting in nearly a decade since 26 children and adults were killed at Sandy Hook Elementary School in 2012. It is also at least the 30th shooting at a K-12 school in 2022, according to a CNN tally.

In a national address Tuesday night, President Joe Biden recalled the Sandy Hook shooting, which occurred when Biden was serving as vice president.

“I had hoped when I became President I would not have to do this again,” he said. “How many scores of little children who witnessed what happened — see their friends die as if they’re in a battlefield, for God’s sake. They’ll live with it the rest of their lives.”

As the last day of school was drawing near, Ross Elementary students were celebrating with special themed dress days, including Tuesday’s theme of “Footloose and Fancy.” Students were encouraged to come dressed in nice outfits and show off their fun footwear, according to a post on the school’s Facebook page.

But by Tuesday afternoon, students shaken by a mass tragedy were bussed to a civic center that had been transformed into a reunification site for surviving children and their families. As the evening stretched on, parents of the young victims began to learn their children had not survived the massacre.

“We see people coming out just terrorized. They’re crying one by one. They’re being told that their child has passed on,” State Sen. Roland Gutierrez told CNN Tuesday night from the civic center.

Here are the latest developments:

As news of the shooting broke in Uvalde, Robb Elementary parents were told the students were being brought to the SSGT Willie de Leon Civic Center, according to a post on the school district’s Facebook page.

By Tuesday night, some families had still not been reunited with their children and had no news, according to Gutierrez, who represents Uvalde.

“We have people that still have not had their children identified,” he told CNN Tuesday night. “Right now, they’re still doing a DNA match.”

In his address Tuesday night, Biden evoked his own experience as a parent who has lost children, saying there are now “parents who will never see their child again, never have them jump in bed and cuddle with them. Parents who will never be the same. To lose a child is like having a piece of your soul ripped away.”

Robb Elementary includes the second through fourth grades and had 535 students in the 2020-21 school year, state data shows. About 90% of students are Hispanic and about 81% are economically disadvantaged, according to the data.

What we know about the shooter

The 18-year-old shooter was a student at Uvalde High School. He was a U.S. citizen, Texas Gov. Greg Abbott said.

Just three days before Tuesday’s massacre, a photo of two AR-15-style rifles appeared on an Instagram account tied to Ramos.

“He barely came to school,” the friend, who did not wish to be identified, said. He added that Ramos had recently sent him a picture of an AR-15, a backpack with rounds of ammunition and several gun magazines.

“He proceeded to text me, ‘I look very different now. You wouldn’t recognize me,'” the friend added.

Ramos worked at a local Wendy’s, the restaurant’s manager confirmed to CNN.
Evening manager Adrian Mendes said Ramos “kept to himself mostly” and “didn’t really socialize with the other employees. … He just worked, got paid, and came in to get his check.”