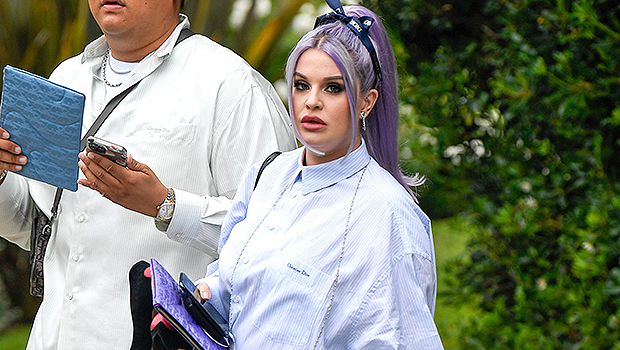 Kelly Osbourne is on the hunt for a new home for her growing family! The 37-year-old former reality star was spotted house-hunting in Los Angeles on May 26 sporting an adorable pair of overalls that fit snuggly around her growing baby belly. The overalls were a light-denim wash and she paired them with a darker denim jacket and black rubber slides. She had her purple hair down. You can see the photos of the middle child of Sharon Osbourne, 69, and Ozzy Osbourne, 73, here.

Kelly announced her pregnancy on May 12 via Instagram, excitedly sharing a selfie with a photo of her sonogram. “I know that I have been very quiet these past few months so I thought I would share with you all as to why… I am over the moon to announce that I am going to be a Mumma. To say that I am happy does not quite cut it. I am ecstatic!” she gushed. This will be Kelly’s first child. She did not reveal how far along in the pregnancy she is.

Kelly did not immediately identify the father of the baby, but several reports have noted that Slipknot band member Sid Wilson, 45, is the father. She began dating him at the beginning of the year and she shared a sweet tribute to him on Valentine’s Day. The pair apparently have known each other for quite some time, as Ok! magazine said they met in 1999, when Slipknot was touring with Ozzy.

The baby has brought Kelly and her famous mother closer together, according to an insider. “Kelly has been getting a ton of motherly advice from Sharon, who is making sure that her daughter is prepared to be a mom,” the source EXCLUSIVELY told HollywoodLife. “She is giving her tips on how to eat, how to sleep, what to wear, how to exercise, what to do and what not to do, and much more.”

On May 23, photos circulated of Kelly attending her brother Jack Osbourne‘s fiancée, Aree Gearhart‘s, baby shower the previous weekend. They were among the first photos taken of the former Fashion Police host since announcing her exciting news. She wore a pink long-sleeved dress and tied her purple hair into a ponytail with a black ribbon. Now Kelly’s baby will have a cousin to grow up with who’s around the same age!

Ozzy Osbourne’s Children: Meet His 6 Kids, Including The Ones Not On Reality Show