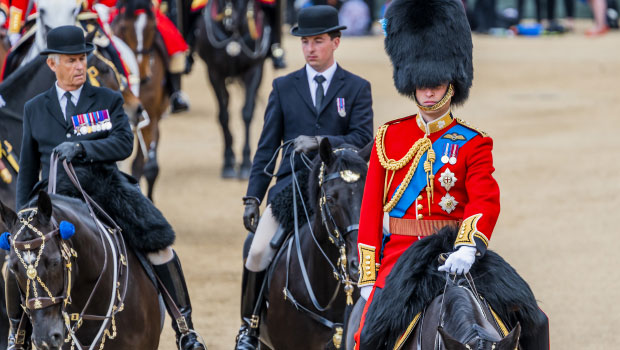 Prince William, 39, looked ready to take part in Queen Elizabeth‘s birthday on June 2 during his latest outing! The Duke of Cambridge was photographed riding a horse in his red and blue uniform as he practiced his duties for the upcoming Trooping the Colour celebration on May 28. He also wore a traditional bearskin hat as he showed off his skills outside in the practice area.

William’s horseriding comes before he’s set to take part in the Horse Guards Parade at the Queen’s annual festivities. He will be joined by his father, the Prince of Wales, and the Princess Royal as they ride in the parade as colonels of the Welsh Guards, the Irish Guards, and the Blues and Royals. Despite the group activity, William was the only one seen practicing during the latest run-through with the horses.

Before William made headlines with his latest outing, he got attention for speaking about his late mother Princess Diana during a speech at the opening of the memorial for the victims of the 2017 Manchester bombing. “Catherine and I know that the atrocity’s impact will last a lifetime and beyond, and that the healing process is still on-going. We want to assure all of you who are struggling that you are very much in our thoughts,” he said in the speech before touching on his own grief.

Prince Williams’s Younger Years: Photos Of The Royal In His Pre-Teens, Teens & 20s

“As someone who lives with his own grief, I also know that what often matters most to the bereaved is that those we have lost are not forgotten,” he explained, referring to his mother. “There is comfort in remembering. In acknowledging that, while taken horribly soon, they lived.”

When William’s not preparing for royal activities or speaking about his beloved mom, he’s spending time with his children. The doting dad reportedly bought his daughter Charlotte a pony for her recent seventh birthday. “The gift Charlotte wanted more than anything was a pony,” a source told US Weekly. “She has been taking horse riding lessons for over a year and is obsessed. William and Kate know that her passion for riding isn’t a [phase] and finally agreed to buy her one.”

Share
Facebook
Twitter
Pinterest
WhatsApp
Previous articleDua Lipa Sparkles In Black & Nude Catsuit On Stage For Future Nostalgia Show: Photos
Next articleRay Liotta’s Fiancée Jacy Nittolo Mourns Him In Heartbreaking Tribute: ‘He Was Everything To Me’