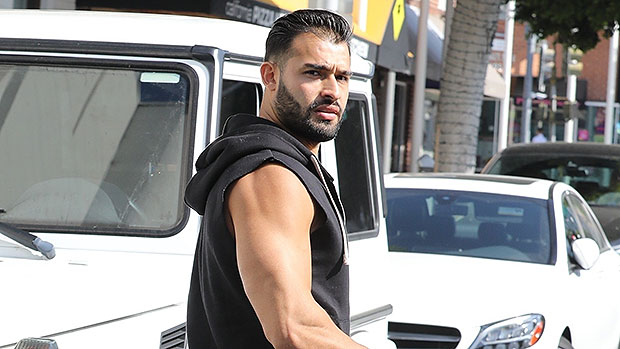 Sam Asghari has been seen for the first time in public since he and fiancée Britney Spears announced their miscarriage on May 14. The 28-year-old model and actor was photographed running errands in Beverly Hills on May 25. He dressed comfy, donning gray joggers, blue sneakers, and a black hoodie with the sleeves cut off.

The images come just 11 days after Britney, 40, revealed she had lost her first child with Sam. “It is with our deepest sadness we have to announce that we have lost our miracle baby early in the pregnancy. This is a devastating time for any parent. Perhaps we should have waited to announce until we were further along however we were overly excited to share the good news,” she began her post. The “Toxic” singer had announced she was expecting with Sam via Instagram on May 11. She did not say how far along she was, but it was fairly early on in her pregnancy.

Britney had previously been open about wanting to expand her family and said one of her grievances with her conservatorship, which was terminated in November 2021, was that she was now allowed to get pregnant. “I want to be able to get married and have a baby. I was told I’m not able to get married,” the singer explained during her first public court hearing in June of 2021. “I have an IUD inside me so I won’t get pregnant but this so-called team won’t let me go to the doctor to take it out.”

Britney Spears & Her Sons: See Photos Of The ‘Lucky’ Singer With Her 2 Kids

Britney has not been publicly spotted since her tragic miscarriage, but she has continued being active on social media. The mother of two danced in a May 17 video on Instagram and explained that music has helped her heal following the devastating news. “I’m definitely going through something in my life at the moment … and music … helps me so much just to gain insight and perspective,” she wrote in the caption. “I shot this 2 months ago but when I look back, each song I danced … to gave me a different feel … a different mood … a different story to tell … and I’m thankful for that escape … this song is pretty spiritual and I really enjoy dancing to it.” She danced to Beyonce’s 2008 hit “Halo” in the post.

She has also continued sharing photos of herself posing naked. She originally said her “stupid” pregnancy hormones made her want to be naked, and she has not stopped flaunting her physique since her miscarriage. An individual close to Britney EXCLUSIVELY revealed to HollywoodLife that besides the pregnancy hormones, Britney posts naked because she feels free and confident. “Britney is feeling her freedom, she’s had every move controlled for so many years, now that she can do what she wants, she’s having fun pushing the boundaries,” the source revealed. “Plus, she’s finally feeling so good about her body, she does want to show it off. Britney loves the body positive movement. She wants to celebrate her body because for so long she was made to feel bad about it. Posting naked pics is a huge rush for her, she loves reading the fans’ comments and getting all that love, it’s doing a lot of good for her self-confidence.”

Meanwhile, Sam has been by Britney’s side to support her through the difficult time, even skipping out on the 2022 Cannes Film Festival to stay home with her. “Couldn’t make it to Cannes Film Festival this year,” Sam shared on his Instagram Story on May 19. “Personal life and family come first, always. See you next year.” Furthermore, an insider close to Sam EXCLUSIVELY confirmed to HollywoodLife that being close to Britney was of utmost importance to him. “Britney is having a difficult time with this, but she has a ton of support and has been reading the comments from her fans, who are telling her how brave she is for sharing this info. She sees the comments from fans who have gone through the same struggle, and she knows she is not alone,” the source divulged. “This has brought her comfort. Britney has the best support system around her possible and Sam isn’t letting her out of his sight for one second right now.”