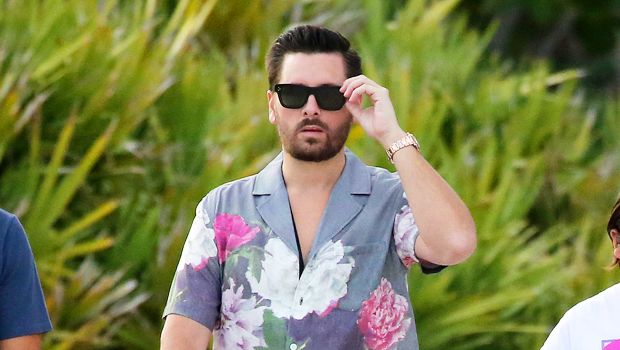 Looking for some peace and quiet? Scott Disick, 38, appeared to be in escape mode on Sunday, May 23, as he jetted away to “the beach” amid ex Kourtney Kardashian’s over-the-top Italian wedding with Travis Barker over the weekend.

The reality star took to social media to offer a first-person look at his travels on his Instagram Story. The sometimes house-flipper snapped a shot out of his private jet’s window and onto the tarmac and asked his 26.7million followers, “Where 2?”.

He offered a little more info in the next post, where he captured a screen of his flight’s journey. “Next stop, the beach,” he wrote over the panel, which predicted a nearly 4 and a half hour flight.

Scott Disick With The KarJenners: Photos

Scott was seen looking very downcast while leaving a bar in Hollywood early on the morning of Saturday, May 21. The former Kardashian-insider tried to keep a low profile with a Yankees cap and a hoodie on in the grainy, after-hours shots.

His LA sighting came after all of the Kardashian clan flew across the Atlantic for Kravis’ nuptials, which were graciously hosted by Italian fashion house Dolce & Gabbana. There had already been strong speculation that Scott, who shares three kids with Kourtney, would not be invited.

Kourtney and Scott began dating back in 2007, and welcomed three kids through their relationship: Mason, 12, Penelope, 9, and Reign, 7. Kourtney ended their romantic relationship in 2016 amid Scott’s struggles with alcohol and infidelity, but he remained close with the family, still appearing on Keeping Up With The Kardashians and traveling with the family until Blink-182 rocker Travis entered the picture.

Though Scott seemed to be dealing with news of the wedding in his own way, he did give Kourtney and Travis’ relationship his stamp of approval during a recent episode of Hulu’s The Kardashians. “[Kourtney] found someone. I’m happy for her. She’s got a man that loves her, and she deserves it. Because there were so many years that I didn’t put her first,” he admitted, referencing their time together.