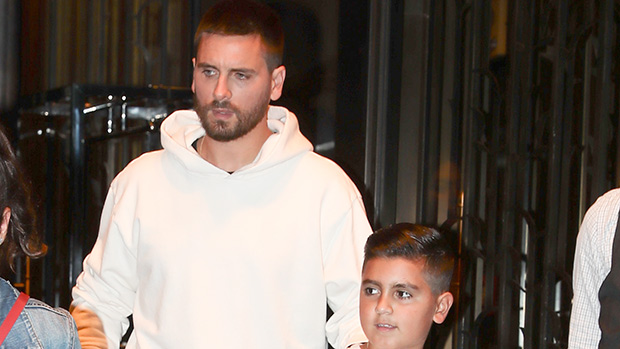 The Disick kids are back in the United States after a long weekend in Portofino, Italy, where their mom, Kourtney Kardashian, married Travis Barker. The three children spent some time away from dad, Scott Disick, as he was, understandably, not invited to the nuptials. However, as soon as the little ones returned home on May 24, they reunited with their dad, which he documented on Instagram.

First, Scott shared a photo of Reign Disick sleeping in a comfortable-looking bed. He also posted a selfie with daughter, Penelope Disick, as well as a group shot with Penelope, Mason Disick and some friends. It’s unclear if Kourtney and Travis also returned home. They were most recently photographed in Italy on Monday, May 23, where they were seen spending time on a boat and then walking hand-in-hand on the streets.

Scott seemed to have kept himself busy and distracted over Kourtney’s wedding weekend. First, he jetted off to the beach, and then he was in New York City, where he was seen spending time with friends at a strip club. Scott admittedly did not treat Kourtney right during the nearly 10 years they were together, but he hasn’t had the easiest time seeing her move on.

Meanwhile, Kourtney and Travis are blissfully in love. After being friends for years, the pair took things to the next level in the fall of 2020. They got serious quickly, and Travis proposed one year later in October 2021. The lovebirds didn’t waste much time tying the knot, either.

Kourtney and Travis first eloped at the beginning of April in Las Vegas, but did not have a marriage license to make it official. On May 15, they legally wed at a courthouse with Travis’s dad and Kourtney’s grandmother in attendance. Then, they brought their closest family and friends together for an official celebration in Italy on May 22. It was quite a lavish affair, with the bride and groom, as well as all of the KarJenner family members, wearing Dolce & Gabbana ensembles.