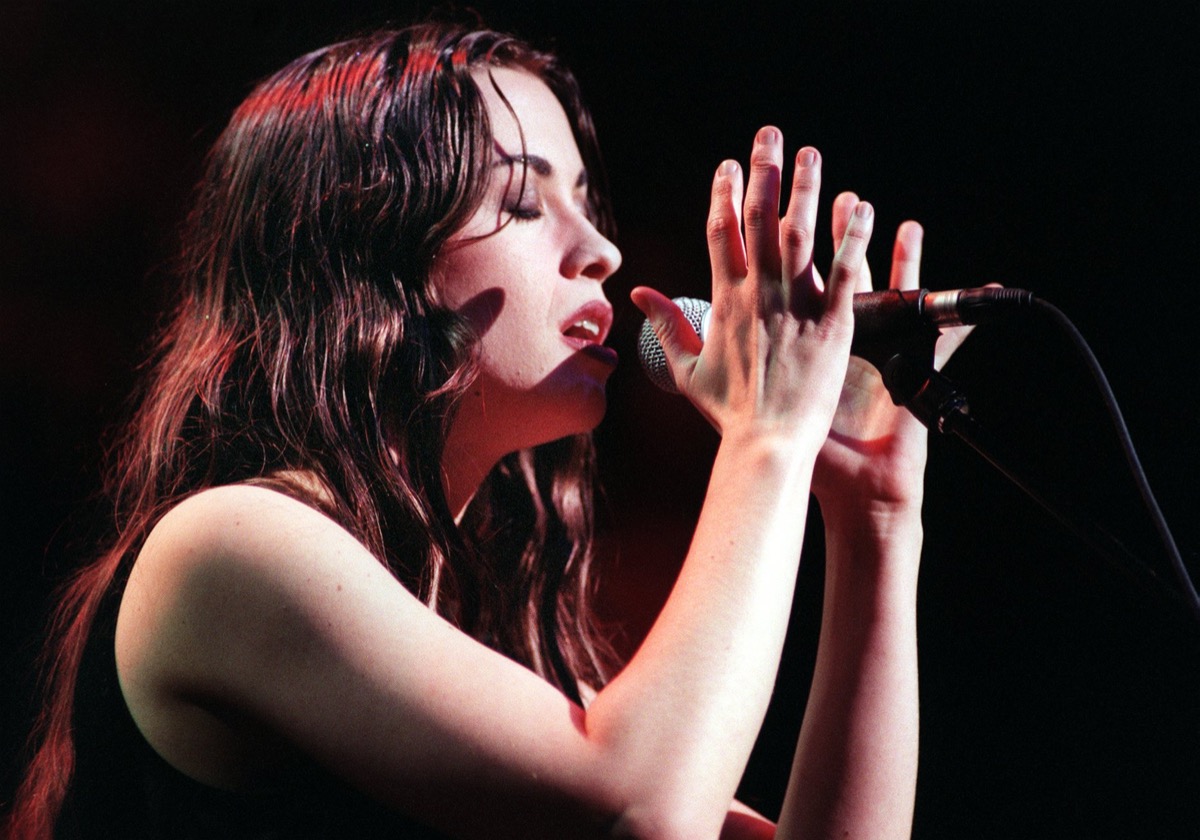 With some 33 million copies sold worldwide, you oughta know many of the songs on Alanis Morissette’s monumental 1995 album Jagged Little Pill, released when the singer-songwriter was just 21. The former Canadian television star’s righteous anger, introspective lyrics, and massive commercial success helped kick off a mid-’90s renaissance for women rockers.

But though Morisette’s music defined a certain sort of ’90s sound, her career didn’t end there. Keep reading to learn what she’s been doing since her days of music mega-stardom, and where she is now, at age 47.

READ THIS NEXT: ’90s Celebrity Couples You Totally Forgot About.

Though Morissette has never matched the blockbuster success of Jagged Little Pill, which was actually her third studio album after two pop records, she’s never stopped making music. It took her three years to release a follow-up, and 1998’s Supposed Former Infatuation Junkie was met with mixed reviews and much lower sales—around 5.5 million albums. She next released a live album, MTV Unplugged, in 1999, and another full-length studio record, Under Rug Swept, followed in 2002, led by the hit single “Hands Clean.” Under Rug Swept sold around 1.1 million albums in the U.S., and 3.8 million albums worldwide.

In 2004, Morissette released So-Called Chaos, which some critics called a return to radio-friendly form after two more experimental albums. However, the sales decline continued, with the album moving fewer than 500,000 copies in the U.S.; her subsequent album, 2008’s Flavors of Entanglement, sold about half as many copies again despite positive reviews.

After the release of 2012’s Havoc and Bright Lights, Morissette took an extended break from recording. Though she released a second live album, Live at Montreux 2012, the following year, her next studio album, Such Pretty Forks in the Road, didn’t arrive until 2020, the same year Jagged Little Pill turned 25.

Clips of Morissette getting “slimed” as a teenager on the ’80s Canadian kids’ show You Can’t on That on Television can still be found on YouTube, but the singer has had a far more auspicious acting career as an adult. She played God in the 1999 Kevin Smith religious satire Dogma, and, in the early 2000s, appeared on episodes of the HBO comedies Sex and the City and Curb Your Enthusiasm.ae0fcc31ae342fd3a1346ebb1f342fcb

She had a small role in the 2004 Cole Porter musical biopic De-Lovely, and later appeared in the sci-fi film Radio Free Albemuth, based on the novel by Philip K. Dick. On television, she guest starred in eight episodes of the series Weeds and also appeared in Degrassi: The Next Generation, Nip/Tuck, and the sitcom Up All Night, starring Maya Rudolph.

“I love [acting],” Morissette told IGN in 2012. “[W]hen I was 10 years old I was at that proverbial fork in the road and I was acting as much as I was singing and writing songs just seemed to be so much more self-reliant and self-originating. Making a movie…the stakes are a lot higher. Making a song, I just have to go in my living room.”

Morissette has had a number of serious relationships since becoming a superstar, often with other creative types. She began dating actor Ryan Reynolds in 2002 after meeting him at Drew Barrymore’s birthday party. The pair announced their engagement in 2004, but broke things off in 2007 before tying the knot. According to an interview with Access Hollywood, Morissette’s 2008 album Flavors of Entanglement was inspired by the relationship’s messy ending—particularly the song “Torch.”.

“Yeah, it’s really about my grief,” Alanis said. “I think the most painful, sort of suffering-oriented moments in my life [are] when I’m resisting something…If I just say, ‘It’s true. I’m unbelievably insecure, really broken, devastated,’ then I can move through it, toward the next place. But if I keep resisting it, I’ll stay there forever.”

In 2010, Morissette married rapper Mario “Souleye” Treadway (pictured above), and has since given birth to three children: son Ever Imre, born in 2010; daughter Onyx Solace, born in 2016; and son Winter Mercy, born in 2019.

Since becoming famous, Morissette has used her music to support causes she believes in, frequently appearing at benefit concerts, and was honored with a United Nations Global Tolerance Award in 2001 for “her contributions promoting tolerance through the arts,” according to Billboard.

She has also spoken out in support of mental health awareness and gone public about her past struggles with an eating disorder as well as postpartum depression.

More than 25 years after it was originally released, Jagged Little Pill remains as relevant as ever. In 2019, a jukebox musical inspired by the album and with a book by Oscar-winning screenwriter Diablo Cody premiered on Broadway. It was nominated for 15 Tony Awards and won two. The show closed in December 2021 after multiple shutdowns due to the COVID-19 pandemic.

Morissette’s planned 25th anniversary tour was also delayed due to the pandemic. Meant to launch in 2020, the worldwide tour began in 2021 and will continue through the summer of 2022. “”I think in general the common denominator through the whole record is really just me unwittingly giving myself permission to be human,” the singer said, reflecting on the album from a vantage point more than two decades after its recording in an interview with The Independent.