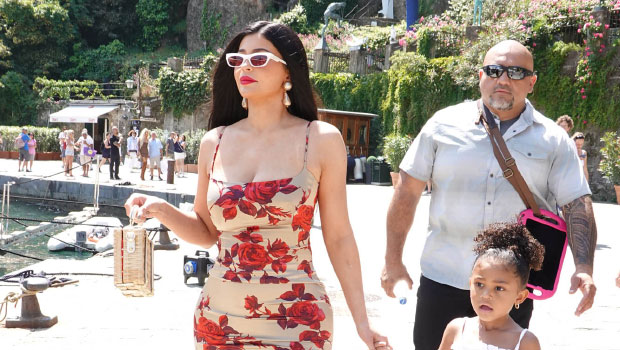 Stormi Webster, 4, is growing up in style! The little fashionista wore an adorable white summer dress from Dolce and Gabbana and white socks and sneakers as she stepped outside in Portofino, Italy with her mom Kylie Jenner, 24, where they’ll be attending Kourtney Kardashian and Travis Barker‘s third wedding. The tot and the makeup mogul held hands as they enjoyed the sunny weather and she topped off her look with a high ponytail and small hoop earrings.

Kylie also looked stylish in her own dress. It was long and tan with spaghetti straps and had a red floral print. She paired it with clear flat sandals and accessorized with matching dangling earrings as her long straight hair was down and parted int he middle. She also wore white-framed sunglasses.

Kylie and Stormi’s latest outing comes as the KarJenner family are preparing to witness Kourtney and Travis exchange vows for the third time, which happens to be the first time in front of many guests. The lovebirds had a quick ceremony in Las Vegas in early Apr. before they obtained a legal marriage license, and again at a courthouse in CA, where they officially became husband and wife, last week. Kim Kardashian and Khloe Kardashian have already been photographed in gorgeous Italy as well as mom Kris Jenner and Kendall Jenner, who brought her beau Devin Booker.

Some of Stormi’s little cousins seem to also be on the guest list, but Khloe’s daughter True was spotted hanging out with her dad Tristan Thompson in social media video he posted. He also shared a sweet smiling photo of the two of them posing and captioned it with “Twinz” along with two red heart emojis.

It turns out cameras will be around Kourtney, Travis, and all their wedding guests to film the big celebration for their family reality show on Hulu, The Kardashians. “Kourtney and Travis’s upcoming wedding will be filmed and parts of it will be used and appear on The Kardashians reality show,” an insider EXCLUSIVELY told HollywoodLife. “They know that they are both reality stars now, as Travis has appeared on nearly every episode. Their storyline is a central focus and after some consideration, they both feel that they can’t have a wedding and not allow it to air.”