To Stop School Shootings, You Must Vote For Democrats 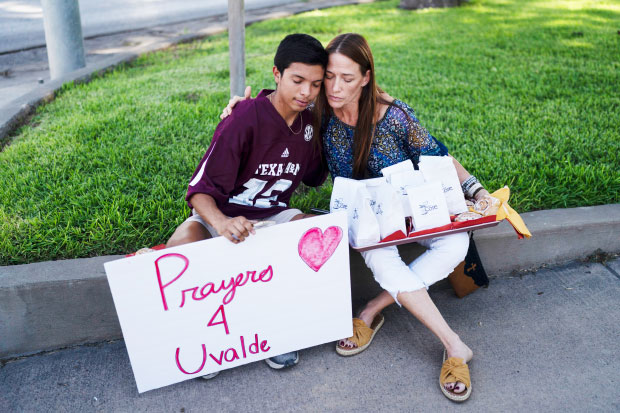 Nineteen precious fourth-grade students were massacred at the Robb Elementary School in Ulvade, Texas, along with their two teachers — and the time to stop this reign of terror is now! The deranged shooter who committed this horror was able to legally purchase two assault rifles, 375 rounds of ammunition, and seven 30-round magazines, not long after his 18th birthday. He was able to walk right into the school, which he had once attended, go into a classroom of 4th graders, lock the door, and slaughter the 10-year-olds. He shot up the children so much, that some of their parents had to give DNA in order for their bodies to be identified. They were unrecognizable.

It’s sick that any American can so casually be able to purchase weapons of war. Texas may have the loosest gun laws in the country. Texans are allowed to openly carry handguns without a permit or license, guns are allowed on college campuses. In fact, the state has eliminated almost all restrictions on the ability for anyone 18 and above to carry a gun.

During the Ulvade press conference today presided over by Texas Governor Gret Abbott, he tried to blame the massacre on “mental health” issues. He refused to acknowledge that the easy access that virtually any adult in the state has to killing machines played any part in the deathly rampage. Beto O’Rourke, who is running to unseat him as Governor of Texas, was not having it! He crashed the press conference and confronted Abbott.

“The time to stop the next shooting is right now and you are doing nothing,” he accused Abbott. “You are offering us nothing. You said it’s not predictable. This is totally predictable when you choose not to do anything. This is on you until you choose to do something.”

Beto is right. And my bet is that he wasn’t just speaking for the anguished parents of the 19 murdered innocents. He was speaking for most Texans and most Americans. Sane Americans are sick of the nonstop slaughter. They are sick of the relentless mass shootings: in a Buffalo supermarket last week, at a church in Las Vegas, also last week, at an El Paso Wal Mart in 2019, at a small Sutherland, Texas church where 28 were killed in 2018, and at a Santa Fe high school in 2018 — just to name a few.

Parents are now also terrified to send their children off to school every day. Ulvade was the deadliest elementary school shooting since Adam Lanza murdered 21 first graders and six school staff at Sandy Hook Elementary School in 2012. It’s only been three years since 17 students and seven teachers were gunned down in Parkland, Florida.

And it doesn’t have to be this way. Listen up, readers. This DOESN’T happen in other countries. There have been 288 school shootings in the U.S. since 2009. In Canada, there have been 2. In Mexico, 8. France has had 2. And the U.K. had one in 1996, then handguns were banned. There have been none since.

Other countries don’t have school shootings. They also don’t have over 45,000 gun deaths a year like we did in the U.S. in 2020. Americans are ten times more likely to be killed by guns than people in other developed countries. If you have had it with the terror. If you don’t want to live in fear for your life or the lives of people you love when you go to school, to church, to the supermarket, to a movie, to a concert, or even to work, you do have the power to change the situation.

Democratic legislators in the House of Representatives have passed gun safety legislation, but it has been blocked in the Senate by Republican Senators. At the state level, it is Republican legislators and governors who have repeatedly refused to pass gun safety laws and like in Texas have made it easier and easier to buy every available weapon of war. Democratic political leaders have tried to stop this throughout the country but have been blocked except in states with full democratic control.

But even in a state like New York with stricter gun laws, guns flood in from across the Pennsylvania border and from other states with loose laws. The Republican party is beholden to the NRA which donates vast amounts of money to its members. Mitch McConnell, Ted Cruz, and virtually every Republican political leader have nothing more to offer the Ulvade parents and other Americans than “thoughts and prayers.”

In fact, Governor Abbott, Ted Cruz, and Donald Trump are scheduled to speak at the NRA convention in Houston this weekend. Could that be any more of a slap in the face to the grieving parents of the fourth-grade students?

If you want this terror to end, there is only one solution — vote blue. You must vote for democratic candidates who promise to pass sensible gun safety legislation, at the local, state, and federal level.

Republicans will not protect you or your children. That is the bottom line. If you and we don’t choose to do this, then the gun deaths won’t stop. Then the horror is “on us.”