What we know about the victims at Robb Elementary School 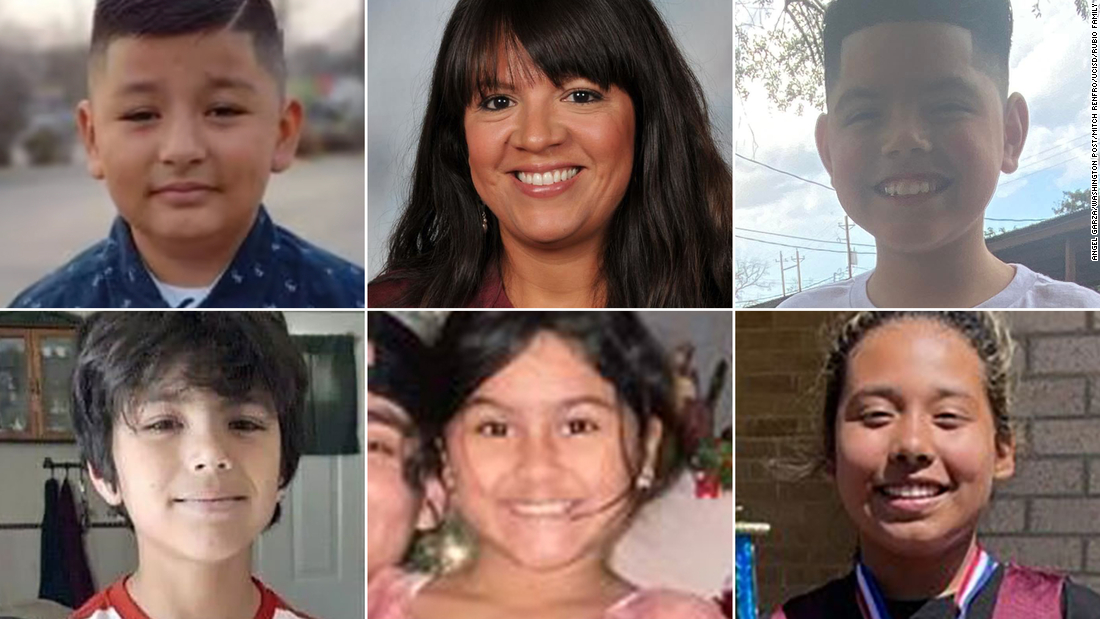 Families gathered at a civic center that night to learn whether their loved ones had survived. Some had the grim task of providing DNA swabs to help investigators determine whether their family members was among the victims.

As of Wednesday afternoon, at least 13 families said they had received devastating news. The bodies of nine victims were released to funeral homes Wednesday evening, Judge Lalo Diaz told CNN. The remaining 12 bodies of victims will be released either later Wednesday night or Thursday, Diaz said.

Here’s what friends and relatives want everyone to remember about the people they lost:

Irma Garcia, a teacher at Robb Elementary, has been identified as a victim in Tuesday’s shooting, CNN has confirmed through a GoFundMe site set up to raise funds for funeral expenses and family needs.

Garcia was a wife and mother to four children, the GoFundMe campaign said.

“Sweet, kind, loving. Fun with the greatest personality. A wonderful 4th grade teacher at Robb Elementary that was a victim in a Texas school shooting in Uvalde, Texas. She sacrificed herself protecting the kids in her classroom. She was a hero. She was loved by many and will truly be missed,” the campaign said.

Garcia’s nephew, John Martinez, told The Washington Post that officials informed the family that she helped shield students from the gunfire.

According to Garcia’s profile on the Uvalde Consolidated Independent School District website, she had been an educator for 23 years. It was her fifth year co-teaching with Eva Mireles, who was also tragically gunned down at the elementary school.

For seven hours, Angel Garza scrambled to find his 10-year-old daughter, Amerie Jo. He pleaded for the public’s help on Facebook.

“I don’t ask for much or hardly even post on here but please It’s been seven hours and I still haven’t heard anything on my love,” Garza wrote. “Please help me find my daughter.”

“Thank you everyone for the prayers and help trying to find my baby. She’s been found. My little love is now flying high with the angels above,” Garza posted.

“Please don’t take a second for granted. Hug your family. Tell them you love them. I love you Amerie jo. Watch over your baby brother for me.”

Garza told CNN’s Anderson Cooper Wednesday his daughter had just turned 10 years old two weeks ago. The family gifted her with a phone, which she had been asking for, Garza said.

Garza found out his daughter was trying to use her phone to call authorities during the shooting, two students told him. He explained he’s med-aid and responded to the scene where he saw one girl covered in blood who told him that someone had shot her best friend. When Garza asked who her best friend was, the girl said his daughter’s name.

“I just want people to know she died trying to save her classmates. She just wanted to save everyone,” Garza said.

The family has been trying to cope with Amerie’s death. Garza said his 3-year-old son has been asking for his sister every morning when he wakes up.

“We informed him that his sister is now with God and she will no longer be with us,” he said through tears.

“She was the sweetest girl who did nothing wrong,” Garza said, breaking down. “I just wanna know what she did to be a victim.”

Mireles had been an educator for 17 years. Erica Torres recalled the care with which Mireles treated her son Stanley, who has autism, while he was in her third- and fourth-grade classes. In an effort to stop him from wandering around the school, Mireles put Stanley in charge of rounding up students to get to class.

Mireles’ daughter, Adalynn, tweeted a tribute to her mother Wednesday, a family member confirmed to CNN. The tweet also included a picture of Adalynn and her mom.

“Mom, you are a hero. I keep telling myself that this isn’t real. I just want to hear your voice,” the tribute read. “I want to thank you mom, for being such an inspiration to me. I will forever be so proud to be your daughter. My sweet mommy, I will see you again.”

In her spare time, Mireles enjoyed running, hiking, biking and being with her family, according to her profile on the Uvalde Consolidated Independent School District’s website.

“She was a vivacious soul. She spread laughter and joy everywhere she went,” relative Amber Ybarra told CNN. “She was a loving and caring mom, relative, teacher to her students, and it’s absolutely tragic what’s happening.”

Martinez took a photo of her fourth-grader and told him she was proud of him and loved him. That was the last moment she was to share with her “mama’s boy.”

“He was funny, never serious, and his smile …” Felicha Martinez told the Post, her voice breaking. “That smile I will never forget. It would always cheer anyone up.”

Just a few days shy of completing his last year of elementary school, Xavier was counting down to his official move up the academic ladder into Flores Middle School in Uvalde, his mother told the Post.

“He really couldn’t wait to go to middle school,” she said.

The family of 10-year-old Uziyah Garcia told CNN that their fourth-grader was among those killed at Robb Elementary.

Uziyah was “full of life,” according to an uncle, Mitch Renfro. He loved video games and anything with wheels, and leaves behind two sisters.

“The sweetest little boy that I’ve ever known,” Garcia’s grandfather Manny Renfro told CNN affiliate KSAT. “I’m not just saying that because he was my grandkid.”

Uziyah last visited his grandfather in San Angelo during his spring break. Renfro recalls tossing around a football with him and how quickly his grandson took to the sport.

“We started throwing the football together, and I was teaching him pass patterns. Such a fast little boy and he could catch a ball so good,” Renfro said. “There were certain plays that I would call that he would remember and he would do it exactly like we practiced.”

Flores described the fourth grader as an amazing kid and big brother to his three siblings. Jose loved baseball and video games.

“He was always full of energy,” Flores said. “Ready to play till the night.”

Jose Jr. wanted to be a police officer when he grew up because he wanted to protect others. His mother, Cynthia Flores, remembered how he would always help her around the house, especially when it came to his baby brother.

Jose Jr.’s sister Endrea Flores is just nine months younger than her brother. Both were in fourth grade at Robb Elementary, though Endrea was in a different class. What she appreciated most about her older brother, she said, “that he would always support me and he would always play with me.”

Felix and Kimberly Rubio had just celebrated their daughter Lexi’s achievements at school before she was killed.

Lexi, who was 10 years old and in the fourth grade, had made the All-A honor roll and received a good citizen award, her parents told CNN.

“We told her we loved her and would pick her up after school. We had no idea this was goodbye,” Kimberly Rubio wrote in a post on Facebook.

The parents told CNN they were proud of their daughter, who loved softball and basketball. She wanted to be a lawyer when she grew up, the family told CNN.

“She was kind, sweet, and appreciated life. She was going to be an all-star in softball and had a bright future, whether it’s sports or academic. Please let the world know we miss our baby.”

Felix Rubio, a deputy with the Uvalde County Sheriff’s Office, told CNN’s Jason Carroll he was one of many authorities who responded to the scene of the shooting. The grieving father said he wants to see gun violence addressed.

Tess Marie Mata, 10, had been saving money for a trip to Disney World with her family before she was killed at Robb Elementary, her sister, Faith Mata, told The Washington Post.

Tess was in the fourth grade and loved TikTok dances, Ariana Grande and the Houston Astros, Faith Mata told the Post.

“My precious angel you are loved so deeply. In my eyes you are not a victim but a survivor. I love you always and past forever baby sister, may your wings soar higher then you could ever dream,” Faith Mata wrote on Twitter.

Ten-year-old Nevaeh Alyssa Bravo was killed in the shooting, her cousin told the Washington Post.

Austin Ayala told the paper the family is devastated after losing Nevaeh, whom he said put a smile on everyone’s face

Funeral services are pending, according to an online obituary by Hillcrest Memorial Funeral Home.

Family members identified Eliana “Ellie” Garcia, 9, as one of the victims, according to CNN affiliate KHOU.
Rogelio Lugo and Nelda Lugo, Garcia’s grandparents, told the Los Angeles Times that she was a fourth-grader at the school and the second-eldest of five girls in the family.

She loved the movie “Encanto,” cheerleading and basketball, according to her grandparents. They add that she dreamed of becoming a teacher.

Family members identified Annabell Guadalupe Rodriguez, 10, as one of the victims, according to CNN affiliate KHOU-TV.

She was a third-grader at the school. Her family told KHOU that she was in the same classroom as her cousin, Jacklyn Jaylen Cazares, who was also shot and killed.

Social media posts from the family of Jacklyn Jaylen Cazares confirm that she was among the victims of the Uvalde, Texas, shooting.

Cazares, 9, was killed along with her cousin, friend and classmate Annabell Guadalupe Rodriguez. The two were both in the fourth grade at Robb Elementary.

“She was full of love and full of life. She would do anything for anybody,” Cazares’ father Jacinto Cazares told reporters in a video distributed by Reuters. “And to me, she’s a little firecracker, man. It comforts me a little bit to think she would be the one to help her friends in need.”

Cazares’ family recently came together to celebrate her first Communion, her father said.

“Through COVID, through the death of a family member a year ago, it brought us together and it was something beautiful,” he added. “And now, we’re being brought together, but it is in tragedy.”

Jacinto Cazares arrived at the scene at Robb Elementary School shortly after he heard that something was going on, joined near the building’s front door by several other men who had children at the school, he told The Washington Post. He said he wanted to rush into the building as soon as he heard the gunshots coming from inside the school.

“There were five or six of (us) fathers, hearing the gunshots, and (police officers) were telling us to move back,” Cazares told the paper. “We didn’t care about us. We wanted to storm the building. We were saying, ‘Let’s go’ because that is how worried we were, and we wanted to get our babies out.”

Hours later, he learned his daughter had been shot and killed, the Post reported.