What we know and don’t know in the Texas massacre 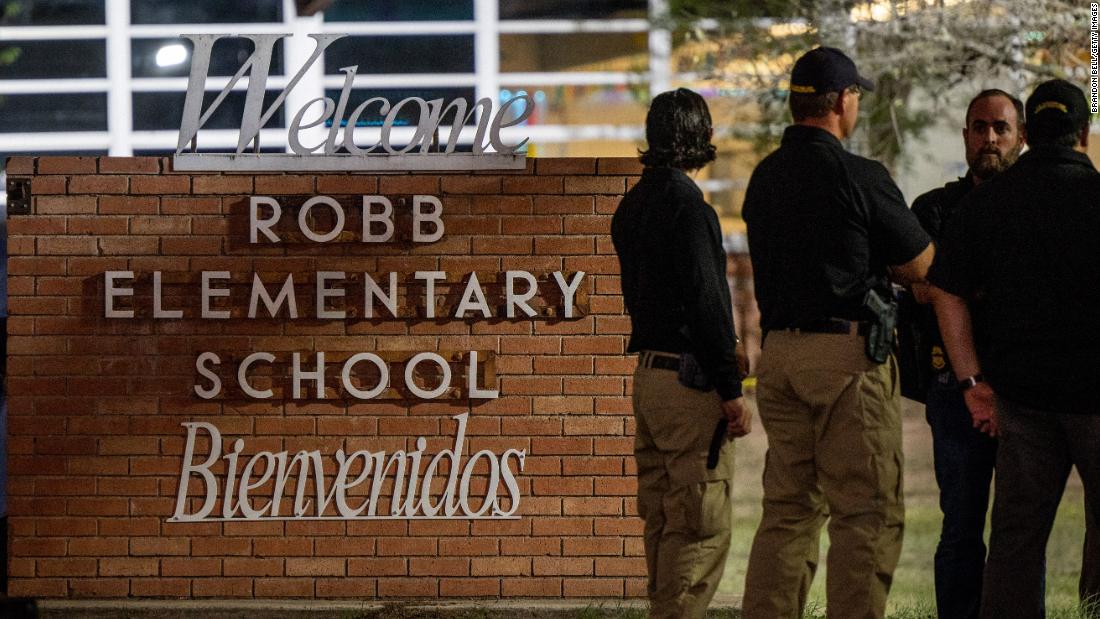 More questions were raised Thursday afternoon, as officials revealed no officers engaged the suspect before he entered the school, contradicting earlier information that he encountered an armed school resource officer.

Gunman shot his grandmother, texted his plans and crashed his car

Salvador Ramos, 18, was the gunman, authorities have said.

Minutes before the horrific attack, Ramos allegedly sent a series of text messages to a teen girl in Europe whom he had met online, describing how he had just shot his grandmother and would “shoot up a(n) elementary school.”

Ramos complained about his grandmother being “on the phone with AT&T abojt (sic) my phone,” according to screenshots reviewed by CNN and an interview with the girl, whose mother gave permission for her to be interviewed.

Six minutes later, he texted: “I just shot my grandma in her head.”

The 15-year-old girl, who lives in Frankfurt, Germany, had begun chatting with Ramos May 9 on a social media app, she said later.

Ramos told her Monday he got a package of ammunition and the bullets would expand when they struck somebody, she said.

At some point, the girl asked what he planned to do. He told her it was a surprise and to “just wait for it,” she said.

On Tuesday, at 11:01 a.m. CT, Ramos called and told her he loved her, she said. Then, about 20 minutes later, he texted her he had shot his grandmother. The 66-year-old was in serious condition Wednesday at a San Antonio hospital, officials said.

It’s not clear why Ramos then targeted Robb Elementary, a school of 535 students in grades 2 through 4 as of last school year.

Near the campus, his vehicle crashed into a ditch, Texas Department of Public Safety (DPS) Sgt. Erick Estrada said. The cause of the crash was not clear.

Next, Ramos got out of the vehicle wearing a bulletproof vest and carrying a rifle, Estrada said.

Then the horrific school attack unfolded

He exited his vehicle on the passenger side of his truck, carrying a rifle and a bag, Escalon said, citing witness accounts.

The shooter saw two witnesses at a funeral home across the street, Escalon said, and fired at them before continuing to walk toward the school. He climbed a fence into a parking lot and began shooting at the school.

There were no officers at the school when the gunman arrived, Escalon said, walking back earlier information put out by his agency that the gunman first encountered an armed school resource officer.

DPS officials had previously said the gunman was “engaged” by a school officer, and that the gunman dropped a black bag full of ammunition outside the school during that encounter.

That earlier information was “not accurate,” Escalon told reporters, and nobody confronted the shooter from the time he left his grandmother’s house to the time he entered the school. The shooter, he said, “walked in unobstructed, initially.”

Escalon said it appears the suspect walked through an unlocked door, “so, we are going to look at that and try to corroborate that as best we can.”

The shooter walked into the west side of the school at 11:40 a.m., Escalon said. He walked through the school and into the adjoining classroom with opened doors between them.

Four minutes after the gunman made entry to the school, Escalon said, officers with the Uvalde Police Department and school district entered the school and heard gunfire.

“Officers are there, the initial officers, they received gunfire, they don’t make entry initially because of the gunfire they’re receiving. But we have officers that are calling for additional resources,” Escalon said, describing requests for equipment such as body armor and personnel, including negotiators.

While those calls are being made, officers were evacuating students and teachers from the school, he said.

An hour later, Escalon said, a tactical team comprised of officers from US Border Patrol, the Uvalde County Sheriff’s Office and the Uvalde Police Department made entry and fatally shot the suspect.

The shooter barricaded himself in the adjoining classrooms where the 19 fourth-graders and two teachers were slaughtered, per DPS officials.

Exactly how the shooter barricaded himself inside the classrooms — whether he locked the door or created a physical barrier, for example — also remains unclear, Olivarez said Thursday morning. “We’re still trying to establish if there was any type of locking mechanism on the doorway from inside the classroom.”

Over 80 federal officers responded immediately to the carnage, and soon 150 converged on the area, US Border Patrol Chief Raul Ortiz told CNN on Wednesday. Beyond his unit, they came from US Customs and Border Protection’s Air and Marine Operations and the US Homeland Security Department’s Homeland Security Investigations.

The agents and other law enforcement officers took fire from the shooter, who had barricaded himself, Department of Homeland Security spokeswoman Marsha Espinosa tweeted.

“Risking their own lives, these Border Patrol Agents and other officers put themselves between the shooter and children on the scene to draw the shooter’s attention away from potential victims and save lives,” she wrote.

Police continue to try to piece together the full timeline of the shooting, Olivarez said Thursday morning.

Investigators also are working to establish what security measures were in place at the school, Olivarez told CNN, after noting the shooter “was able to make entry into that school unimpeded” through the unlocked door.

“We’re working closely with the school district, with the superintendent, to see what the policies were in place,” he said.

The district had in place a safety plan with its own police force, social media monitoring and a threat reporting system to “provide a safe and secure environment” for students, its website states. It’s not clear to what degree the plan was developed with active shooters in mind.

Amid the unknowns, questions swirled Thursday about the police response.

“I understand that’s what everyone wants to know is a timeline,” Olivarez told CNN. “We’re trying to establish a timeline from the initial shooting with the grandmother to the point where the shooter was killed, and also in between that,” he said.

“So, we’re trying to establish every single timeline as far as how long the shooter was inside the classroom, how long did the shooting take place. But as of right now, we have not been able to establish that.”

Emergency protocol calls for ending a threat as quickly as possible because fatalities happen in seconds to minutes.

“It’s almost incomprehensible for me to come up with a rational explanation as to why you would wait 30 minutes to an hour to get in there,” said Andrew McCabe, CNN senior law enforcement analyst. “The door breaching, if it’s just a locked door, that doesn’t take 30 minutes to get into.”

Here’s what we know so far about the shooter …

The gunman was a student at Uvalde High School, officials said.

Three days before the shooting, a photo of two AR-15-style rifles appeared on an Instagram account tied to Ramos.

Ramos recently sent a former classmate a photo showing an AR-15, a backpack with rounds of ammunition and several gun magazines, said the peer, who didn’t want to be identified.

“I was like, ‘Bro, why do you have this?’ and he was like, ‘Don’t worry about it,'” the friend told CNN. “He proceeded to text me, ‘I look very different now. You wouldn’t recognize me.'”

Ramos had stopped attending school regularly, the friend said. He worked at a local Wendy’s, the restaurant’s manager told CNN.

Ramos “kept to himself mostly” and “didn’t really socialize with the other employees,” evening manager Adrian Mendes said. “He just worked, got paid, and came in to get his check.”

The teen in Germany who said she and Ramos had communicated for weeks said Ramos told her he spent a lot of time alone at home.

“Every time I talked to him,” she said, “he never had plans with his friends.”

… and the victims whose lives were stolen

Hours after the shooting, families waited in agony at a nearby civic center to find out if their loved ones had survived. Some gave DNA samples to help identify the victims, they told CNN.

“We see people coming out just terrorized. They’re crying one by one. They’re being told that their child has passed on,” said state Sen. Roland Gutierrez, who was there Tuesday.

Outside, a father who had just learned his child had been killed fought tears as he was embraced by his cousins. A few yards away, a grandmother arrived from San Antonio and vowed not to stop praying for her 10-year-old granddaughter as they waited for identification results from family DNA swabs.

“He really couldn’t wait to go to middle school,” she said.

Angel Garza spent seven hours searching for his 10-year-old daughter before learning Amerie Jo Garza was among the children killed, he said.

“Please don’t take a second for granted,” Garza posted on Facebook. “Hug your family. Tell them you love them.”

Tess Marie Mata, also 10, was killed in the shooting, too, her sister Faith Mata, 21, confirmed to the Washington Post. Tess was a fourth-grader who loved TikTok dances, Ariana Grande and the Houston Astros, Mata told the Post. She had been saving money for a family trip to Disney World.

“My precious angel you are loved so deeply. In my eyes you are not a victim but a survivor. I love you always and past forever baby sister, may your wings soar higher then you could ever dream,” Mata wrote on Twitter.

As of Thursday, six victims remained hospitalized, four of whom — including the gunman’s grandmother, who is in serious condition — are at University Hospital in San Antonio, according to the hospital.

Brooke Army Medical Center in San Antonio was treating two adult patients from the shooting, both in serious condition, a spokesperson said.

The remains of 19 victims had been taken to funeral homes by midday Thursday, with the final two due to be released that afternoon, Judge Lalo Diaz said.

Share
Facebook
Twitter
Pinterest
WhatsApp
Previous articleTexas official provides timeline of gunman’s actions outside and inside the school during shooting
Next articleRussia is depopulating parts of eastern Ukraine, forcibly removing thousands into remote parts of Russia